Lars Patrik Bodén (born 30 June 1967) is a retired Swedish track and field athlete who competed in the javelin throw. He holds the Swedish national record at 89.10 m, which he set on 24 March 1990. He briefly held the world record with this throw until Steve Backley set a new record later the same year.

Stephen James Backley, OBE is a retired British track and field athlete who competed in the javelin throw. He formerly held the world record, and his 91.46 m throw from 1992 is the British record. During his career, he was a firm fixture in the British national athletics team. He won four gold medals at the European Championships, three Commonwealth Games gold medals, two silvers and a bronze at the Olympic Games, and two silvers at the World Championships. Currently, he is an occasional commentator for athletics competitions, especially the field events. 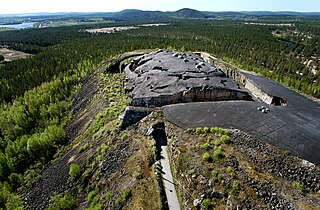 Boden Fortress is a modern fortress consisting of several major and minor forts and fortifications surrounding the city of Boden, Norrbotten, in northern Sweden. The fortress was originally intended to stop or delay attacks from the east or coastal assaults, which at the time of construction meant Russian attacks launched from Finland. It was primarily the expansion of the railway net in Norrland, which in turn was a consequence of the rising importance of the northern iron ore fields, that led to the increased strategic value of northern Sweden and the construction of the fortress. Although the main forts were finished in 1908, many of the supporting fortifications were not completed until the start of the First World War. Improvements were also continuously made during, and between, both World Wars.

Olof Patric Waldemar Sundström is a retired professional ice hockey centre, who played in the NHL for ten seasons.

Peter Blank is a German track and field athlete who competed in the javelin throw. Early on in his career, he was a decathlete. In 1992, he set the world record for longest javelin throw in a decathlon with a distance of 79.80 m.

Upper Norrland Military District, originally VI Military District was a Swedish military district, a command of the Swedish Armed Forces that had operational control over Upper Norrland, for most time of its existence corresponding to the area covered by the counties of Västerbotten and Norrbotten. The headquarters of Milo ÖN were located in Boden.

Thomas Alan Petranoff is a retired American track and field athlete who competed in the javelin throw. He held the world record from May 1983 to July 1984; his 99.72 m throw was greater than the length of an American football field. During his career, he was a silver medalist at the World Championships in 1983 and represented the United States at the Summer Olympics in 1984 and 1988. He transferred to South Africa in the 1990s and was twice a winner at the African Championships. His personal best with the new implement javelin is 89.16 m (292.5 ft). In the final years of his career, he returned to the United States and won a medal at the 1999 Pan American Games.

Magnus Arvidsson is a retired Swedish track and field athlete who competed in the javelin throw.

Ian Manley Reed was a discus thrower, who represented Australia at the 1952 Summer Olympics. He won the gold medal at the 1950 Commonwealth Games in the men's discus throw event. He was born in Victoria.

Boden is a surname. Notable people with the surname include:

Magnus Kirt is an Estonian athlete who competes in the javelin throw. He won the silver medal at the 2019 World Championships. His personal best of 90.61 m is the Estonian record.

Alexander William Molano is an American professional soccer player who currently plays for the Dallas Sidekicks in the Major Arena Soccer League.