Patscherkofel
Location in the Alps of Europe

Quartz phyllite is the dominant bedrock, with gneiss and feldspar at the peak. Calcium-rich bedrock such as basalt, chalk and dolomite also occurs but is too scarce to have much influence on the soils of this severely glaciated mountain. Acid brown earth, podzolized brown earth and iron-humus podzol are the dominant soil types. [1]

During both the 1964 [2] and 1976 Winter Olympics, [3] the mountain was the venue for the men's downhill race, along with the bobsleigh and luge competitions in neighboring Igls. The other five alpine skiing events were held at Axamer Lizum. [4]

Egon Zimmermann, also of Austria, took the gold medal a dozen years earlier in the 1964 Olympic downhill. His winning time was 2:18.16, more than a half minute behind Klammer's.

The 1964 Winter Olympics, officially known as the IX Olympic Winter Games, was a winter multi-sport event which was celebrated in Innsbruck, Austria, from January 29 to February 9, 1964. The city was already an Olympic candidate, unsuccessfully bidding to host the 1960 Games. Innsbruck won the 1964 Games bid defeating the cities of Calgary in Canada and Lahti in Finland. The sports venues, many of which were built for the Games, are located within a radius of around twenty kilometers around Innsbruck. The Games included 1,091 athletes from 36 nations, which was a record for the Winter Games at the time. Athletes participated in six sports and ten disciplines which bring together a total of thirty-four official events, seven more than the 1960. The luge made its debut on the Olympic program. Three Asian nations make their Winter Games debut: North Korea, India and Mongolia.

The 1976 Winter Olympics, officially known as the XII Olympic Winter Games, was a winter multi-sport event celebrated in Innsbruck, Austria, from February 4 to February 15, 1976. The Games were awarded to Innsbruck after Denver, the original host city, withdrew in 1972. This was the second time the Tyrolean capital had hosted the Winter Olympics, having first done so in 1964. 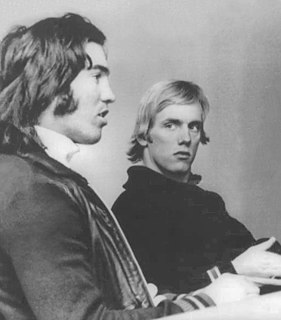 Andy Ray Mill is a former alpine ski racer on the U.S. Ski Team. He was two-time Olympian, competing primarily in the downhill and combined events on the World Cup circuit. 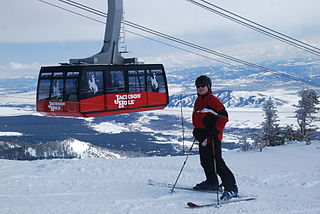 Jackson Hole Mountain Resort (JHMR) is a ski resort in the western United States, at Teton Village, Wyoming. In the Teton Range of the Rocky Mountains, it is located in Teton County, 12 miles (20 km) northwest of Jackson and due south of Grand Teton National Park. It is named after the historically significant Jackson Hole valley and is known for its steep terrain and large continuous vertical drop of 4,139 ft (1,262 m). JHMR appears frequently in the media as one of North America's most expensive ski resorts. 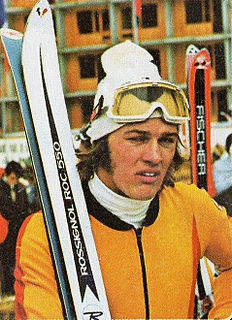 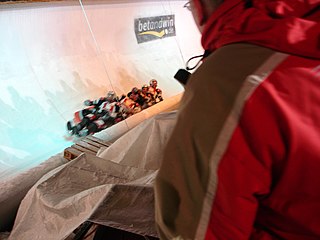 The Men's downhill competition of the 1984 Winter Olympics was held at Bjelašnica, Yugoslavia. Due to weather delays, it was run on Thursday, February 16, a full week after originally scheduled.

Alpine Skiing at the 2012 Winter Youth Olympics was held at the Olympia Run Patscherkofel in Igls, Innsbruck, Austria from 14 to 22 January. The difference in the Youth Olympic program for alpine skiing compared to the Winter Olympics was that there were no downhill for both genders, and an inclusion of a team event. 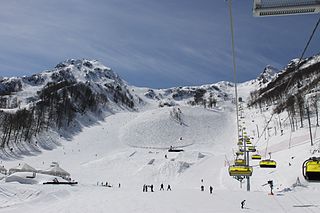 The Rosa Khutor Alpine Resort is an alpine ski resort in Krasnodar Krai, Russia, located at the Aibga Ridge of the Western Caucasus along the Roza Khutor plateau near Krasnaya Polyana. Constructed from 2003 to 2011, it hosted the alpine skiing events for the 2014 Winter Olympics and Paralympics, based in nearby Sochi. The resort is 50 kilometers (30 mi) east of the Black Sea at Sochi; the majority of the slopes at Rosa Khutor face northeast, with the backside slopes facing southwest. 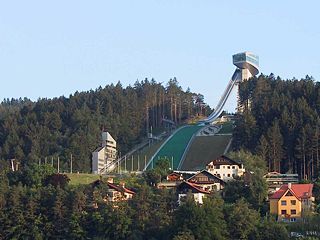 The Men's Downhill competition of the 1980 Winter Olympics at Lake Placid was held at Whiteface Mountain on Thursday, February 14.

The Men's downhill competition of the 1964 Winter Olympics at Innsbruck, Austria, was held at Patscherkofel on Thursday, 30 January. The defending world champion was Karl Schranz of Austria, and defending Olympic champion Jean Vuarnet of France had retired from competition.