Robert Paul Hawkins (12 October 1937 – 26 May 1969) was an Australian motor racing driver. The son of a racing motorcyclist-turned-church minister, Hawkins was a capable single-seater driver but really made his mark as an outstanding sports car competitor driving Ford GT40s and Lola T70s. In 1969 Hawkins was included in the FIA list of graded drivers, an elite group of 27 drivers who by their achievements were rated the best in the world. [1]

Hawkins was hugely popular and known as Hawkeye; the son of a gentleman of the cloth he was a colourful character with a wide colourful vocabulary. [2] He was also famous for being one of two racers to crash into the harbour at the Monaco Grand Prix.

Hawkins began racing in Australia with an Austin-Healey in 1958. He left Australia and arrived in England in 1960. [3] He found employment with the Donald Healey Motor Company Ltd., [4] under John Sprinzel:

"I put an ad in the Evening Standard newspaper looking for a mechanic and employed a really good guy to be our works foreman; his name was Paul Hawkins. Paul literally came in straight off the boat from Australia. He’d done a little bit of racing and was a very good mechanic, very good as he knew his stuff, and certainly knew the best parts of the English language, too." [5]

Hawkins was soon behind the wheel of an Austin-Healey Sprite, racing at the Aintree 200 meeting on 30 April 1960, and winning his class in the GT race. [6] He then finished 38th at the 1960 Nürburgring 1000 km race, with co-driver Cyril Simson, known as Team 221, on a "miserable foggy day in May". [7] In 1961 at Le Mans Hawkins teamed with John Colgate in an Austin-Healey Sprite, but they retired in the eighth hour with engine problems. [8] On Whit Monday, 1962, at Crystal Palace Hawkins drove Ian Walker's Lotus-Ford to victory in the up to 1,150 c.c. sports car race, setting lap and race records. [9] At Le Mans in 1965 Hawkins, with John Rhodes, finished twelfth overall, and first in class, in a 1.3-litre Austin-Healey Sebring Sprite entered by the Donald Healey Motor Company, completing 278 laps. [10]

Hawkins also drove single-seaters, participating in the first race run to the new Formula Two regulations at Pau on 5 April 1964, finishing seventh in a pushrod Alexis. [11] He was entered in a Team Alexis Alexis-Cosworth at Silverstone on 20 March 1965 but the race was abandoned due to heavy rain. [12] He went on to win the Formula Two Eifelrennen race on the Nürburgring south circuit, in bad weather, in an Alexis-Cosworth Mk. 7 on 25 April 1965. [13]

Hawkins participated in three Formula One World Championship Grands Prix, debuting on 1 January 1965 at the South African Grand Prix in a pushrod Ford 1500cc-engined Brabham Formula Two car. Like fellow-Australian Frank Gardner he started with the John Willment Automobiles team. He scored no championship points, as his best finish was ninth on his debut. He did have two podium finishes in the non-championship Rand Grand Prix, held in South Africa. He finished second in 1964 and third in 1965. In 1964 he won the Rhodesian Grand Prix in the Brabham [14] and in 1965 he also won the Cape South Easter Formula One Trophy. He was a non-starter in the 1965 British Grand Prix [15] and retired from the German Grand Prix that year with an oil leak. [16]

He is one of only two Formula One drivers, along with Italian Alberto Ascari, to have crashed into the harbour in Monaco during a Grand Prix. He did so during the 1965 race, when he spun at the chicane after 79 of the 100 laps. He escaped from the crash unhurt:

"At this point there was a bit of a furore at the chicane for Hawkins struck the wooden barrier at the entry and spun through the straw bales and over the edge of the quay and into the harbour. The Lotus sank to the bottom and the rugged Australian bobbed to the surface and struck out for shore, while boats went to his rescue." [17]

Hawkins was building a business as an owner/operator of racing cars, and in the spring of 1969 he moved his racing shop from North London to Slough. [25] He was killed when his Lola T70 MkIIIB GT crashed and burned at Island Bend during the 1969 RAC Tourist Trophy at Oulton Park. [26]

"The news of his death horrified me. I can hardly believe that a man as skilful and as experienced as he was should be killed in this way" [27] 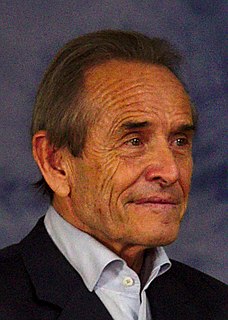 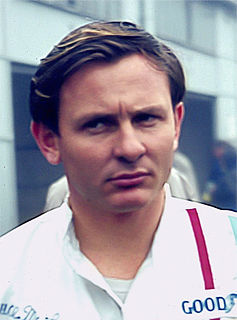 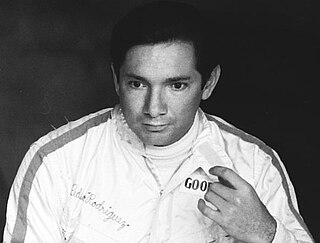 Timothy Theodore Schenken is a former racing driver from Sydney, Australia. He participated in 36 Formula One World Championship Grands Prix, debuting on 16 August 1970. He achieved one career podium at the 1971 Austrian Grand Prix, and scored a total of seven championship points. He did however have two non-championship race podiums – he finished third in the 1971 BRDC International Trophy and third in the 1972 International Gold Cup. 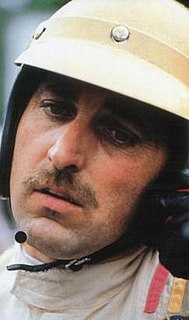 Joseph Schlesser was a French Formula One and sports car racing driver. He participated in three World Championship Grands Prix, including the 1968 French Grand Prix in which he was killed. He scored no championship points. He was the uncle of Jean-Louis Schlesser who himself became a Formula One driver in the 1980s.

Lucien Bianchi, born Luciano Bianchi, was an Italian born Belgian racing driver who raced for the Cooper, ENB, UDT Laystall and Scuderia Centro Sud teams in Formula One. He entered a total of 19 Formula One World Championship races, scoring six points and had a best finish of third at the 1968 Monaco Grand Prix.

Michael Johnson Parkes was a British racing driver, from England. Parkes was born into an automotive background as his father John, was Chairman of the Alvis Group. 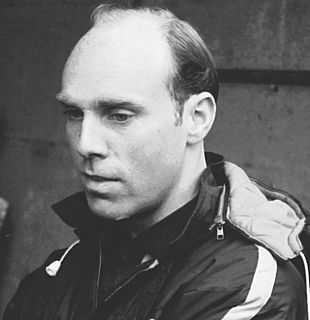 Richard James David "Dickie" Attwood is a British motor racing driver, from England. During his career he raced for the BRM, Lotus and Cooper Formula One teams. He competed in 17 World Championship Grands Prix, achieved one podium and scored a total of 11 championship points. He was also a successful sports car racing driver and won the 1970 24 Hours of Le Mans race, driving a Porsche 917, the first of Porsche's record 19 victories at the famous race.

John Rhodes is a British former racing driver from England, who participated in one Formula One World Championship Grand Prix, the 1965 British Grand Prix, at Silverstone on 10 July 1965, from which he retired on lap 39 with ignition problems. His Cooper-Climax T60 was provided for him by veteran racer Bob Gerard.

Ecurie Ecosse was a motor racing team from Edinburgh Scotland. The team was founded in November 1951 by Edinburgh businessman and racing driver David Murray and mechanic Wilkie Wilkinson, its most notable achievement was winning both the 1956 and 1957 24 Hours of Le Mans. The team also raced in three Formula One races. Ecurie Ecosse's cars were always distinctive in their Flag Blue Metallic paint. 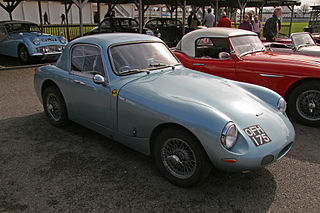 The Austin-Healey Sebring Sprite is an automobile that was produced by the Donald Healey Motor Company at its Cape Works in Warwick, the Healey's Speed Equipment Division in Grosvenor Street, London and subsequently by John Sprinzel Ltd from their well-known premises in Lancaster Mews. A modified version of the production Austin-Healey Sprite, it was recognized by the governing body of motorsport, the Fédération Internationale de l'Automobile, as a separate model in its own right, featuring Girling disc brakes as well as specified engine and chassis improvements. After its homologation (motorsport) on 17 September 1960, FIA regulations permitted the use of 'special bodies' and a small number of Sebring Sprites were subsequently fitted with coupé bodywork in aluminium alloy and glassfibre, the most strikingly attractive examples being those devised by well-known race and rally driver John Sprinzel, who had won the 1959 RAC British Rally Championship. Sprinzel commissioned the coachbuilders Williams & Pritchard, renowned for their racing and prototype work, to produce the bodies. These are usually said to have numbered six, but eight are known to have been made. Further Sprites received similar alloy bodywork from Alec Goldie and Fred Faulkner of the firm Robert Peel Sheet Metal Works. The name 'Sebring Sprite' would become a generic term for any Sprite with disc brakes, and later for any Sprite with coupé or fastback bodywork.

Peter Harry Sutcliffe, a British textile manufacturer from Huddersfield, was active in sports car racing until 1967. Between 1959 and 1967 he won the 1964 Prix de Paris at the Autodrome de Linas-Montlhéry, and the 1965 Pietermaritzburg 3 hours. He raced in Aston Martins, Jaguar D-Type and E types, Shelby Cobra Daytona, Ford GT40s and works Ferrari 330P4s.

Leo Geoghegan was a former Australian racing driver. He was the elder of two sons of former New South Wales car dealer Tom Geoghegan, both of whom become dominant names in Australian motor racing in the 1960s. While his younger brother Ian "Pete" Geoghegan had much of his success in touring car racing, winning five Australian Touring Car Championships, Leo spent most of his racing career in open wheel racing cars.

John Sprinzel is a German born British former auto racing driver. He was renowned for competing in saloon and sports car racing and rallying.

Alfredo Costanzo is a retired Italian born Australian racing driver. From 1980 to 1983 Costanzo won a record four Australian Drivers' Championship in a row, equalling the record set by Bib Stillwell from 1962 to 1965.

Throughout its history, the Italian auto manufacturer Maserati has participated in various forms of motorsports including Formula One, sportscar racing and touring car racing, both as a works team and through private entrants.

Bib Stillwell was a racing driver who was active in Australian motor racing from 1947 to 1965. He won the Australian Drivers' Championship in each of the four years from 1962 to 1965.

Brian Foley is a retired Australian racing driver. He was active from the late 1950s through to 1974. Foley competed in Touring Car, GT and Sports Sedan categories and also contested numerous production car endurance races. His career highlights included a victory in the 1965 Lowood 4 Hour, second place in the 1967 Australian Touring Car Championship and a third-place finish in the 1965 Armstrong 500, all three attained driving a Morris Cooper S.