Paul Kogerman was born into a family of gas factory worker (and former sailor). He went to an elementary school in 1901–1904 and a town school in 1904–1908. After town school Kogerman earned a living by teaching in church manors near Tallinn. [1] In 1913, he was graduated from the Alexander Gymnasium in Tallinn (Reval) as an extern. Starting in 1913, he studied at the University of Tartu, graduating from its Department of Chemistry in 1918. [1] [2] In the Estonian War of Independence he fought in a unit of Tallinn teachers. [1] In 1919–1920 he got a state scholarship to study at the Imperial College London. [1] [2] In May 1921 he was given a qualification of chemical technologist by the University of London and in 1922 he received the degree of Master of Sciences. [1]

From 1921 to 1936, Kogerman was active at the University of Tartu. After the defence of his Master's thesis on the thermal decay of oil-shale, he was elected docent of Organic Chemistry of the University in 1922. He went on to become extraordinary professor in 1924 and full professor in 1925. [1] [2] In 1926 and 1933 he was guest lecturer at the ETH Zürich and in 1927–1928 at Harvard University. In 1934, he defended, in Zürich, his doctoral thesis on the combining and polymerization reactions of the isolated double bond dienes. [2]

From 1936 to 1941, Kogerman was professor of organic chemistry at the Tallinn University of Technology, in 1936–1939 he was also a rector of the University. In 1938, Kogerman was selected to the newly established Estonian Academy of Sciences and in 1946 reselected after re-establishment of the Academy as the Academy of Sciences of the Estonian Soviet Socialist Republic. He was the president of the Estonian Naturalists' Society in 1929–1936.

In 1938–1939 Kogerman was ex officio member of the National Council (Riiginõukogu). From October 1939 until the Soviet occupation of Estonia on 21 June 1940 Kogerman served as Minister of Public Education.

In 1941,Kogerman,together with his family,was deported by Soviet authorities to the prisoner camp in Sverdlovsk Oblast. [1] [3] He was prematurely released and allowed to return to Estonia in 1945. [4] From 1945 to 1951 he was director of the chair for organic chemistry at Tallinn University of Technology. From 1947 to 1950 he served also as the director of the Chemistry Institute of the Academy of Sciences. [5]

In 1927,Kogerman was decorated with the insignia of the Légion d'honneur and in 1938 with the Second Class of the Order of the White Star. In 2006,the Paul Kogerman scholarship was founded,to be granted to successful master's and doctoral level students of the Faculties of Science and Chemical and Materials Technology of the Tallinn University of Technology. [6]

Paul Kogerman won international reputation with his work on oil shale. He initiated systematic research of oil shale and its products by establishing,together with professor Michael Wittlich,a laboratory to study oil-bearing shales in 1925. [2] [7] Kogerman submitted fundamental work on the structure and origin of oil shale and its chemical characteristics,as well as work on thermal processes. 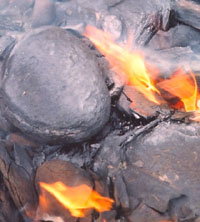 Oil shale is an organic-rich fine-grained sedimentary rock containing kerogen from which liquid hydrocarbons can be produced, called shale oil. Shale oil is a substitute for conventional crude oil; however, extracting shale oil is costlier than the production of conventional crude oil both financially and in terms of its environmental impact. Deposits of oil shale occur around the world, including major deposits in the United States. A 2016 estimate of global deposits set the total world resources of oil shale equivalent of 6.05 trillion barrels of oil in place.

Carl Friedrich Schmidt was a Baltic German geologist and botanist in the Russian Empire. He is acknowledged as the founder of Estonian geology. In the mid-19th century, he researched Estonian oil shale, kukersite, and named it as kuckers.

Friedrich Karl Akel was an Estonian diplomat and politician, a member of the International Olympic Committee, and Head of State of Estonia in 1924.

Paul Ariste was an Estonian linguist renowned for his studies of the Finno-Ugric languages, Yiddish and Baltic Romani language.

The oil shale industry is an industry of mining and processing of oil shale—a fine-grained sedimentary rock, containing significant amounts of kerogen, from which liquid hydrocarbons can be manufactured. The industry has developed in Brazil, China, Estonia and to some extent in Germany and Russia. Several other countries are currently conducting research on their oil shale reserves and production methods to improve efficiency and recovery. Estonia accounted for about 70% of the world's oil shale production in a study published in 2005. 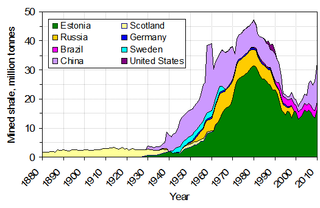 The history of the oil shale industry started in ancient times. The modern industrial use of oil shale for oil extraction dates to the mid-19th century and started growing just before World War I because of the mass production of automobiles and trucks and the supposed shortage of gasoline for transportation needs. Between the World Wars oil shale projects were begun in several countries.

Oil shale gas is a synthetic non-condensable gas mixture (syngas) produced by oil shale thermal processing (pyrolysis). Although often referred to as shale gas, it differs from the natural gas produced from shale, which is also known as shale gas.

Kukersite is a light-brown marine type oil shale of Ordovician age. It is found in the Baltic Oil Shale Basin in Estonia and North-West Russia. It is of the lowest Upper Ordovician formation, formed some 460 million years ago. It was named after the German name of the Kukruse Manor in the north-east of Estonia by the Russian paleobotanist Mikhail Zalessky in 1917. Some minor kukersite resources occur in sedimentary basins of Michigan, Illinois, Wisconsin, North Dakota, and Oklahoma in North America and in Amadeus and Canning basins Australia.

There are two kinds of oil shale in Estonia, both of which are sedimentary rocks laid down during the Ordovician geologic period. Graptolitic argillite is the larger oil shale resource, but, because its organic matter content is relatively low, it is not used industrially. The other is kukersite, which has been mined for more than a hundred years. Kukersite deposits in Estonia account for 1.1% of global oil shale deposits. 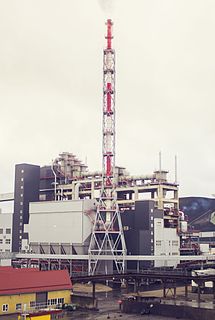 The Galoter process is a shale oil extraction technology for a production of shale oil, a type of synthetic crude oil. In this process, the oil shale is decomposed into shale oil, oil shale gas, and spent residue. A decomposition is caused by mixing raw oil shale with a hot oil shale ash, generated by combustion of carbonaceous residue (semi-coke) in the spent residue. The process was developed in 1950s and it is used commercially for the shale oil production in Estonia. There are projects for further development of this technology and for expansion of its usage, e.g. in Jordan and USA. 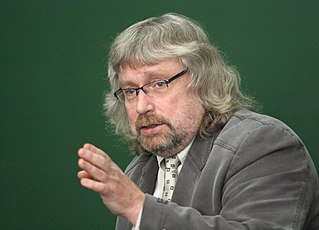 Lauri Vahtre is an Estonian politician, historian, translator and writer.

NPM Silmet AS is a rare-earth processor located in Sillamäe, Estonia. It is a subsidiary of Neo Performance Materials.

Ahtme Power Plant was an oil shale-fired power plant in Ahtme, Kohtla-Järve, Estonia. It was owned by VKG Soojus, a subsidiary of Viru Keemia Grupp. Until the end 2012, it supplied with heat Ahtme district of Kohtla-Järve and Jõhvi.

Mikhail Dmitrievich Zalessky was a Russian paleontologist and paleobotanist. His main focus was an investigation of plant remains in coals and oil shales.

Esimene Eesti Põlevkivitööstus was an oil shale company located in Kohtla-Järve, Estonia. It was a predecessor of Viru Keemia Grupp, a shale oil extraction company.