Pavel Stepanovich Nakhimov (Russian : Павел Степанович Нахимов, pronounced  [ˈpavʲɪl stʲɪˈpanəvʲɪtɕ nɐˈxʲiməf] ) (July 5 [ O.S. June 23] 1802–July 12 [ O.S. June 30] 1855) was one of the most famous admirals in Russian naval history, best remembered as the commander of naval and land forces during the Siege of Sevastopol during the Crimean War.

Born in the village of Gorodok in the Vyazma uyezd  [ ru ] (district) of Smolensk Governorate into a noble Russian family. He was the seventh of eleven children of a landlord, a second major Stepan Mikhailovich Nakhimov and his wife Feodosia Ivanovna Nakhimova (née Kozlovskaya). Six of his siblings died as infants; all of his four brothers also became professional seamen, including vice admiral Sergei Stepanovich Nakhimov (1805—1872). [1]

In 1817 he entered the Naval Academy for the Nobility (Morskoy Dvoryanskiy Korpus) in Saint Petersburg. He made his first sea voyage in 1817, aboard the frigate Feniks ("Phoenix"), to the shores of Sweden and Denmark. Soon afterwards he was promoted to the rank of non-commissioned officer. In February 1818 he passed examinations to become a midshipman and was immediately assigned to the second Fleet Crew (Flotskiy Ekipazh) of the Russian Imperial Navy's Baltic Fleet.

At the beginning of his naval career, Nakhimov's experience was limited to voyages in the Baltic Sea and to a more extensive trip from the White Sea port of Arkhangelsk to Kronstadt naval base near Saint Petersburg. His lucky break came in March 1822, when he was assigned to the frigate Kreiser ("Cruiser"); the vessel took part in a round-the-globe expedition commanded by the well-known Russian explorer Mikhail Petrovich Lazarev (1788-1851), who had already undertaken several such voyages.

During the three-year voyage, Nakhimov was promoted to the rank of lieutenant. On conclusion of this adventure, he received his first award, the Order of Saint Vladimir IV degree. He returned to his native Smolensk and was assigned to the 74-gun warship Azov, which made its maiden voyage from Arkhangelsk to Kronstadt in the autumn of 1826.

In the summer of 1827, Azov sailed to the Mediterranean as flagship of the Russian squadron under the command of Rear-Admiral Lodewijk van Heiden for a joint expedition with the French and British navies against the Ottomans. Just before its departure, Emperor Nicholas I visited the Azov and ordered that in the case of hostilities, the crew should deal with the enemy "as the Russians do".

Azov, under then-Captain First Rank M.P. Lazarev, distinguished itself most prominently in the Battle of Navarino (20 October 1827), during which the allied British-French-Russian fleet "totally" destroyed the Ottoman squadron. [2] For his outstanding gunnery performance during the battle, the 27-year-old Nakhimov was promoted to the captaincy of a trophy ship [ citation needed ] and was decorated by the allied governments. [3] [ dead link ]

During the Crimean War of 1853-1856 Nakhimov distinguished himself by annihilating the Ottoman fleet at Sinope in 1853. His finest hour came during the siege of Sevastopol, where he and Admiral V. A. Kornilov organized from scratch the land defense of the city and its port, the home base of the Russian Black Sea Fleet. As the commander of the port and the military governor of the city, Nakhimov became in fact the head of the Sevastopol naval and land defense forces. On July 10 [ O.S. June 28] 1855, while inspecting the forward-defense positions on Malakhov Kurgan, he was fatally wounded by a sniper; he died two days later.

Nakhimov was buried inside St Vladimir's Cathedral in Sevastopol along with Mikhail Lazarev, V.A. Kornilov and Vladimir Istomin. There is a monument erected in his memory. The Soviet government instituted posthumous honors as well, introducing Nakhimov Naval Schools for teenagers in 1943, and establishing in 1944 both the Order of Nakhimov (with two degrees) and the Nakhimov Medal for Navy personnel. The Order of Nakhimov, one of the highest military decorations in the Soviet Union, continues in the Russian Federation. 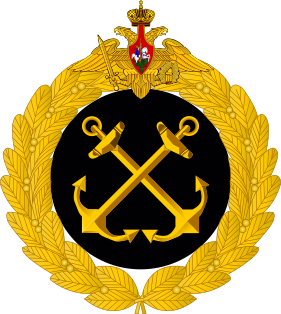 The Battle of Sinop, or the Battle of Sinope, was a Russian naval victory over the Ottoman Empire during the Crimean War that took place on 30 November 1853 at Sinop, a sea port in northern Anatolia, when a squadron of Imperial Russian warships struck and defeated a squadron of Ottoman ships anchored in the harbor. The battle was a contributing factor to bringing France and Britain into the conflict. It is commemorated in Russia as a Day of Military Honour.

The Imperial Russian Navy was the navy of the Russian Empire from 1696 to 1917. It was formally established in 1696 and lasted until being dissolved during the February Revolution of 1917. It developed from a smaller force that had existed prior to Tsar Peter the Great's founding of the modern Russian Navy during the Second Azov campaign. It was expanded in the second half of the 18th century and by the early part of the 19th century, it reached its peak strength, behind only the British and French fleets in terms of size.

Filipp Sergeyevich Oktyabrsky was a Soviet naval commander. He began service in the Baltic Fleet in 1918. From 1925–27 he studied at the Naval Academy in Leningrad. As vice-admiral he was given command of the Black Sea Fleet in March 1939 and headed its actions during the Sieges of Sevastopol (1941-1942) and Odessa (1941). After the war he became a Deputy Commander-in-Chief of the Navy, commander of all naval test centres and from 1957 to 1960 head of the Black Sea Higher Naval Institute "Admiral Pavel Nakhimov" in Sevastopol.

Pavel Alexandrovich Pereleshin was a Russian admiral and general.

Yevfimiy Vasilyevich Putyatin, also known as Euphimius Putiatin, was an admiral in the Imperial Russian Navy. His diplomatic mission to Japan resulted in the signing of the Treaty of Shimoda in 1855, for which he was made a count. His mission to China in 1858 resulted in the Russian Treaty of Tianjin. 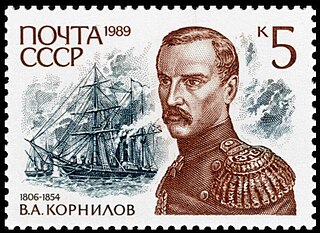 Azov was a 74-gun ship of the line of the Imperial Russian Navy. Azov was built in 1826 to compensate the losses of the disastrous 1824 Saint Petersburg flood. In the same year Azov, commanded by Mikhail Lazarev, became the flagship of Admiral Login Geiden's First Mediterranean Squadron and sailed to the Aegean on a joint English-French-Russian peacekeeping mission. On October 20, 1827 Azov spearheaded the Russian squadron in the Battle of Navarino. She engaged numerous enemy ships and sustained heavy damage.

St. Vladimir's Cathedral is an Orthodox church in Sevastopol which was built in the aftermath of the Crimean War as a memorial to the heroes of the Siege of Sevastopol (1854–1855). 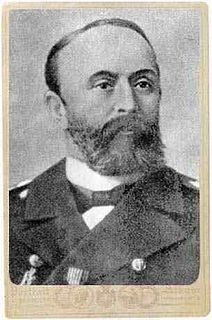 Vsevolod Fyodorovich Rudnev was a career naval officer in the Imperial Russian Navy, noted for his heroic role in the Battle of Chemulpo Bay during the Russo-Japanese War of 1904–1905.

Grigory Ivanovich Butakov was a Russian admiral who fought in the Crimean War. Butakov is widely credited as being the father of steam-powered ship tactics during the 19th century. He was involved in the first battles of the Crimean War, which includes the first sea battles involving steam-powered ships. Butakov wrote of his experiences in his book: New Principles of Steamboat Tactics (1863), which won him the Demidov Prize. In 1881 Butakov assumed the role of Commander-in-Chief of the Port of St. Petersburg. He was also made a member of the State Council in March 1882. Shortly after gaining both titles however, Butakov fell seriously ill, and died on the 31 May 1882, aged 62. The minor planet 4936 Butakov was named in his memory.

The Russian corvette Navarin was an Egyptian corvette captured during the Russo-Turkish War of 1828–1829 and placed into service by the Russians. She remained in the Mediterranean until 1830 when she was transferred to the Baltic Fleet. Navarin remained there until she was ordered to the Far East in late 1853. She was so badly damaged by a series of storms en route that she was deemed too expensive to repair and was sold for scrap in the Netherlands in 1854. 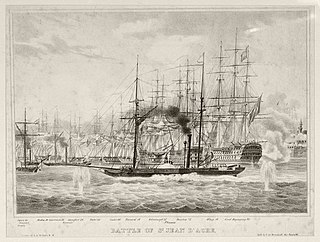