listen )) is the collective name for two peace treaties signed in October 1648 in the Westphalian cities of Osnabrück and Münster. They ended the Thirty Years War and brought peace to the Holy Roman Empire, closing a calamitous period of European history that killed approximately eight million people. [1]

The negotiation process was lengthy and complex. Talks took place in two cities, because each side wanted to meet on territory under its own control. A total of 109 delegations arrived to represent the belligerent states, but not all delegations were present at the same time. Two treaties were signed to end each of the overlapping wars: the Peace Treaty of Münster and the Peace Treaty of Osnabrück. [2] [3] These treaties ended the Thirty Years' War (1618–1648) in the Holy Roman Empire, with the Habsburgs (rulers of Austria and Spain) and their Catholic allies on one side, battling the Protestant powers (Sweden, Denmark, and certain Holy Roman principalities) allied with France, which was Catholic but strongly anti-Habsburg under King Louis XIV.

Joachim Whaley, a leading English-language historian of the Holy Roman Empire, mentions that later commentators such as Leibniz, Rousseau, Kant, and Schiller eulogized the Peace of Westphalia as the first step towards a universal peace, but he points out that "their projections for the future should not be mistaken for descriptions of reality". [4]

Peace negotiations between France and the Habsburgs began in Cologne in 1641. These negotiations were initially blocked by Cardinal Richelieu of France, who insisted on the inclusion of all his allies, whether fully sovereign countries or states within the Holy Roman Empire. [6] [ page needed ] In Hamburg and Lübeck, Sweden and the Holy Roman Empire negotiated the Treaty of Hamburg with the intervention of Richelieu. [7] The Holy Roman Empire and Sweden declared that the preparations of Cologne and the Treaty of Hamburg were preliminaries of an overall peace agreement.

The main peace negotiations took place in Westphalia, in the neighbouring cities of Münster and Osnabrück. Both cities were maintained as neutral and demilitarized zones for the negotiations.

In Münster, negotiations took place between the Holy Roman Empire and France, as well as between the Dutch Republic and Spain who on 30 January 1648 signed a peace treaty, [8] that was not part of the Peace of Westphalia. [9] Münster had been, since its re-Catholicisation in 1535, a strictly mono-denominational community. It housed the Chapter of the Prince-Bishopric of Münster. Only Roman Catholic worship was permitted, while Calvinism and Lutheranism were prohibited.

Sweden preferred to negotiate with the Holy Roman Empire in Osnabrück, controlled by the Protestant forces. Osnabrück was a bidenominational Lutheran and Catholic city, with two Lutheran churches and two Catholic churches. The city council was exclusively Lutheran, and the burghers mostly so, but the city also housed the Catholic Chapter of the Prince-Bishopric of Osnabrück and had many other Catholic inhabitants. Osnabrück had been subjugated by troops of the Catholic League from 1628 to 1633 and then taken by Lutheran Sweden. [7]

The peace negotiations had no exact beginning or end, because the 109 delegations never met in a plenary session. Instead, various delegations arrived between 1643 and 1646 and left between 1647 and 1649. The largest number of diplomats were present between January 1646 and July 1647.

The power asserted by Ferdinand III was stripped from him and returned to the rulers of the Imperial States. The rulers of the Imperial States could henceforth choose their own official religions. Catholics and Protestants were redefined as equal before the law, and Calvinism was given legal recognition as an official religion. [15] [16] The independence of the Dutch Republic, which practiced religious toleration, also provided a safe haven for European Jews. [17]

The Holy See was very displeased at the settlement, with Pope Innocent X calling it "null, void, invalid, iniquitous, unjust, damnable, reprobate, inane, empty of meaning and effect for all time" in the bull Zelo Domus Dei. [18] [19]

The main tenets of the Peace of Westphalia were:

It is often argued that the Peace of Westphalia resulted in a general recognition of the exclusive sovereignty of each party over its lands, people, and agents abroad, as well as responsibility for the warlike acts of any of its citizens or agents.

The treaties did not entirely end conflicts arising out of the Thirty Years' War. Fighting continued between France and Spain until the Treaty of the Pyrenees in 1659. The Dutch-Portuguese War had begun during the Iberian Union between Spain and Portugal, as part of the Eighty Years' War, and went on until 1663. Nevertheless, the Peace of Westphalia did settle many outstanding European issues of the time.[ citation needed ]

Scholars of international relations have identified the Peace of Westphalia as the origin of principles crucial to modern international relations, including the inviolability of borders and non-interference in the domestic affairs of sovereign states. This system became known in the literature as Westphalian sovereignty. [27] [ page needed ] Although scholars have challenged the association with the Peace of Westphalia, [28] the debate is still structured around the concept of Westphalian sovereignty.[ citation needed ]

However, scholars have challenged the view that the modern European states system originated with the Westphalian treaties. The treaties do not contain anything in their text about religious freedom, sovereignty, or balance of power that can be construed as international law principles. Constitutional arrangements of the Holy Roman Empire are the only context in which sovereignty and religious equality are mentioned in the text, but they are not new ideas in this context. While the treaties do not contain the basis for the modern laws of nations themselves, they do symbolize the end of a long period of religious conflict in Europe. [29]

The Thirty Years' War was a conflict fought primarily in modern Germany and Central Europe. Estimates of total military and civilian deaths range from 4.5 to 8 million, mostly from disease or starvation, while it has been suggested that up to 60% of the population died in some areas of Germany. Related conflicts include the Eighty Years War, the War of the Mantuan Succession, the Franco-Spanish War, and the Portuguese Restoration War. 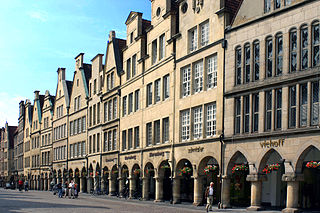 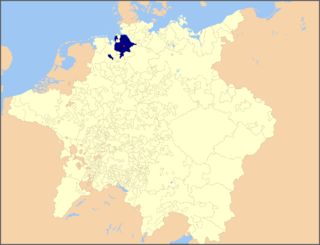 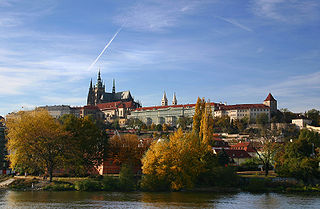 The Peace of Prague, Pražský mír (Czech), Prager Frieden (German), signed on 30 May 1635, ended Saxony's participation in the Thirty Years War. The terms would later form the basis of the 1648 Peace of Westphalia. 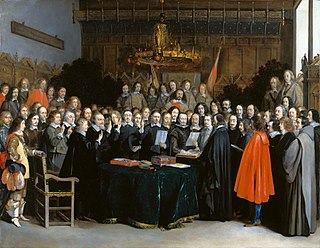 The Peace of Münster was a treaty between the Lords States General of the United Netherlands and the Spanish Crown, the terms of which were agreed on 30 January 1648. The treaty, part of the Peace of Westphalia, is a key event in Dutch history, marking the formal recognition of the independent Dutch Republic and the end of the Thirty Years' War and the Eighty Years' War. 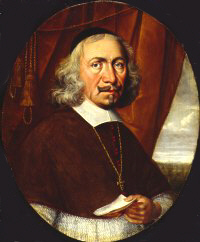 Christoph Bernhard Freiherr von Galen was Prince-bishop of Münster. He was born into a noble Westphalian family.

The Battle of Zusmarshausen was fought on 17 May 1648 between Bavarian-Imperial forces under von Holzappel and an allied Franco-Swedish army under the command of Turenne in the modern Augsburg district of Bavaria, Germany. The allied force emerged victorious, and the Imperial army was only rescued from annihilation by the stubborn rearguard fighting of Raimondo Montecuccoli and his cavalry.

Westphalian sovereignty, or state sovereignty, is a principle in international law that each state has exclusive sovereignty over its territory. The principle underlies the modern international system of sovereign states and is enshrined in the United Nations Charter, which states that "nothing ... shall authorize the United Nations to intervene in matters which are essentially within the domestic jurisdiction of any state". According to the idea, every state, no matter how large or small, has an equal right to sovereignty. Political scientists have traced the concept to the Peace of Westphalia (1648), which ended the Thirty Years' War. The principle of non-interference was further developed in the 18th century. The Westphalian system reached its peak in the 19th and 20th centuries, but it has faced recent challenges from advocates of humanitarian intervention.

The Prince-Bishopric of Osnabrück) was an ecclesiastical principality of the Holy Roman Empire from 1225 until 1803. It should not be confused with the Diocese of Osnabrück, which was larger and over which the prince-bishop exercised only the spiritual authority of an ordinary bishop. It was named after its capital, Osnabrück. 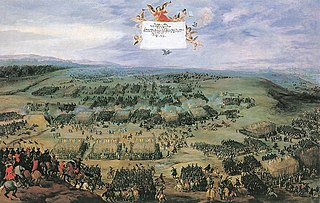 The so-called European wars of religion were a series of wars waged in Europe during the 16th, 17th and early 18th centuries. Fought after the Protestant Reformation began in 1517, the wars disrupted the religious and political order in the Catholic countries of Europe. However, many historians have rejected the description of these conflicts as wars of "religion" because religion was not the only or even the most important factor in the proliferation of these battles. Instead, some historians have labelled the religious nature of the conflict and what res modern nation-state. Other motives during the wars involved revolt, territorial ambitions, and Great Power conflicts. By the end of the Thirty Years' War (1618–1648), Catholic France was allied with the Protestant forces against the Catholic Habsburg Monarchy. The wars were largely ended by the Peace of Westphalia (1648), establishing a new political order now known as Westphalian sovereignty.

The Swedish Wars on Bremen were fought between the Swedish Empire and the Hanseatic town of Bremen in 1654 and 1666. Bremen claimed to be subject to the Holy Roman Emperor, maintaining Imperial immediacy, while Sweden claimed Bremen to be a mediatised part of her dominions of Bremen-Verden, themselves territories immediately beneath the emperor. Sweden was able to gain some territory, but despite forcing a formal oath of allegiance on Bremen, did not gain control of the town. 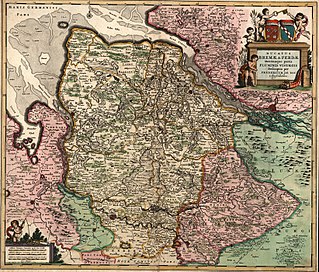 The historic territory of Verden emerged from the Monarchs of the Frankish Diocese of Verden in the area of present-day central and northeastern Lower Saxony and existed as such until 1648. The territory managed by secular lords for the bishops was not identical with that of the bishopric, but was located within its boundaries and made up about a quarter of the diocesan area. The territory was referred to at the time as Stift Verden or Hochstift Verden, roughly equating to Prince-Bishopric of Verden. This territory described in local sources today incorrectly as Bistum Verden and, in 1648, was given the title Principality of Verden, sometimes referred to as the Duchy of Verden.

Events from the year 1648 in Sweden

The itio in partes was a procedure of the Imperial Diet of the Holy Roman Empire between 1648 and 1806. In this procedure, the members of the diet divided into two bodies (corpora), the Corpus Evangelicorum and the Corpus Catholicorum, irrespective of the colleges to which they otherwise belonged. That is, the Protestant (Evangelical) members of the College of Electors, the College of Princes and the College of Cities gathered together separately from the Catholic members of the same. The two bodies then negotiated with each other, but debated and voted among themselves. A decision was reached only when both bodies agreed. The itio in partes could be invoked whenever there was a unanimous vote of one body. At first, it could only be invoked in matters affecting religion, but gradually this requirement was dropped.