Kwon Sung-hwan (Korean : 권성환; born May 27, 1989), better known by his stage name Peakboy (픽보이), is a South Korean rapper, record producer, and singer-songwriter. He released his debut single "Gin & Tonic" in 2017 via SoundCloud and first mini-album Portrait the following year. Since signing with Neuron Music, he has released two additional mini-albums and numerous stand-alone singles.

Peakboy was born Kwon Sung-hwan on May 27, 1989, the older of two sons. He lived in Gyeyang District, Incheon, where he attended Annam High School. [1] [2] He and Park Yong-in  [ ko ] of Urban Zakapa attended the same hagwon, and Peakboy took interest in music upon seeing Park use a music program. [3] He joined a company as a trainee and intended to become a vocalist by age 22 before giving up. He enlisted in mandatory military service and was discharged in 2016. [4] After completing his service, he deliberated between being a pop music composer or a self-produced artist. [5]

Peakboy came up with his stage name the day before registering it with the Korea Copyright Commission. "Peak" refers to the peak point which arises when making music, and "boy" was attached due to its regular usage in the monikers of foreign record producers. [6] Early in his career, Peakboy composed music for girl group Hello Venus. [7] He would go on to take part in songwriting and production for other musicians, including on Urban Zakapa's "Another Me" (2015) and Kkal & Maxx's debut record Caffe in the Morning (2016). [6] [8] He also produced tracks for the fifth and sixth seasons of the rap competition series Show Me the Money . [6] Peakboy joined the music crew Juicy Wave after having it suggested to him by rapper Kyu Young. [3]

In 2017, Peakboy uploaded his debut single "Gin & Tonic" onto audio sharing website SoundCloud and he began receiving contract offers from various companies. [2] [6] His first mini-album Portrait and its lead single "Shame" featuring George were released on March 14, 2018. [9] Peakboy signed an exclusive contract with Neuron Music and released the single album 05/27 through the record label on August 23, headed by the electronic hip-hop track "Birthday" with Hanhae as its featured guest. [10] [11] Peakboy penned the track in four days, which was influenced by his stay in the United States two months earlier. [3] [4] He released his second mini-album Us on April 11, 2019. [12] "Kelly", released from the single album Frola, samples "Doowap" by labelmate Paul Kim. [13] Its accompanying music video published the following month. [14] By the end of the year, he held his first concert with Bibi on Christmas Eve. [15]

Peakboy's third mini-album Loop, fronted by the lead single "Diet" featuring Wheein of Mamamoo, was released on August 18, 2020. [16] From the following month, he hosted three episode of his radio program entitled Peakboy's Arcade on Naver Now. [17] In early 2021, he accompanied Kim to Jeju Island for a music video shoot. Peakboy was inspired by the trip and the ongoing COVID-19 pandemic to write "Anywhere". [18] A song about traveling, the R&B digital single was released on April 20. [19] [20] On July 25, the electronic hip-hop single "Gyopo Hairstyle" was issued. Its music video features cameos by model Han Hyun-min, actors Choi Woo-shik, Park Seo-joon, Park Hyung-sik, and singer V of BTS. [21]

Peakboy's song lyrics deal with his thoughts and experiences of everyday life. [22] His lyricism has been noted for being blunt and candid, while his music has been described as trendy and original. [3] [6] The foundations of his work are classified as electronic and black music. In terms of voice type, he is a baritone. [5] Writing for Atstar1 magazine, editor Hwang Yeon-do described Peakboy as one of the few musicians with a good musical tone, skilled rapping, and talented capabilities as a singer-songwriter. [23] Peakboy cites You Hee-yeol, Yoon Jong-shin, and Yoon Sang as his role models. [24]

Kang Chang-mo, better known by his stage name KCM, is a South Korean singer. He debuted in 2003 with the song "I Know", from the soundtrack to the Korean drama, Punch.

Jung Dae-hyun, also known mononymously as Daehyun, is a South Korean singer and actor. He debuted as an idol in the six-member group B.A.P under TS Entertainment, where he served as the main vocalist from 2012 to its dissolution in 2019. Following his departure from TS Entertainment, he released his debut mini-album Chapter2 "27" in April 2019. Jung has ventured into musical theater since being cast for Napoleon in 2017.

This is a list of singles and albums released under Starship Entertainment. The entertainment company is home to prominent artists such as K. Will, Jooyoung, Monsta X, Brother Su, WJSN, Cravity, and Ive, as well as formerly artists such as Sistar, Boyfriend, Junggigo, and Mad Clown. 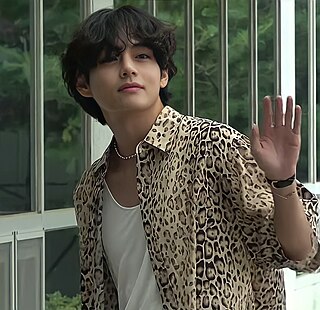 Kim Tae-hyung, also known professionally as V, is a South Korean singer and songwriter. A member of the South Korean boy band BTS, V has released three solo tracks under the band's name: "Stigma" in 2016, "Singularity" in 2018, and "Inner Child" in 2020, all of which have charted on South Korea's Gaon Digital Chart. In 2019, V released his first independent song, the self-composed digital track "Scenery". He also appeared on the Hwarang: The Poet Warrior Youth (2016) soundtrack alongside bandmate Jin.

Kim Sung-joo is a South Korean television host and a former announcer. A former sports broadcaster and presenter, he became known to the wider public as a variety show host and for his stint on the reality-variety show Dad! Where Are We Going?.

The following is a list of notable events and releases that happened in 2018 in music in South Korea.

The following is a list of notable events and releases that happened in 2019 in South Korean music.

Run BTS is a South Korean variety web series starring boy band BTS. The series broadcasts weekly and has been offered for free viewing on V Live since 2015 and on Weverse since 2020. In each episode, the band members play games or participate in a variety of activities that require them to complete challenges, and sometimes carry out secret missions, in order to earn prizes or receive punishments.

The following is a list of notable events and releases that have happened, or are expected to happen in 2020 in music in South Korea. 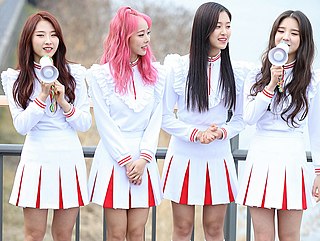 Loona 1/3 is the first sub-unit of South Korean girl group Loona, formed through a pre-debut project titled "Girl of the Month". The unit consists of 4 members, HeeJin, HyunJin, HaSeul and ViVi. They debuted on March 13, 2017, with the extended play Love & Live. 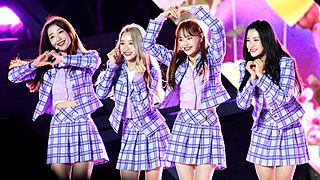 yyxy also known as Loona yyxy is the third sub-unit of the South Korean girl group Loona, formed through a pre-debut project titled "Girl of the Month". The unit consists of 4 members, Yves, Chuu, Go Won and Olivia Hye. They debuted with their first extended play titled Beauty & the Beat on May 30, 2018. They were the last sub-unit to debut with the pre-debut project, before the group debuted as a whole with their extended play titled [+ +].

Jo Hyun-soo, better known by his stage name twlv, is a South Korean singer-songwriter and record producer. He began his music career by uploading songs onto music sharing website SoundCloud and collaborating with rapper Superbee. twlv released his solo mini-album Contents ½ in 2018 and competed on SBS TV's survival program The Fan. He signed with Yng & Rich Records the following year and has released several records, including his first studio album K.I.S.S (2020).

The following is a list of notable events and releases that have happened, or are expected to happen in 2021 in music in South Korea.

Across the Universe is the third mini-album by South Korean idol group D-Crunch. It was released on October 20, 2020, by Ai Grand Korea and distributed by Kakao M. Upon the expiration of the group's contract with their former agency All-S Company at the beginning of the year, D-Crunch signed with Ai Grand Korea. While preparing music for the project, vocalist Hyunwoo suspended his activities with the group due to a back injury that had worsened. 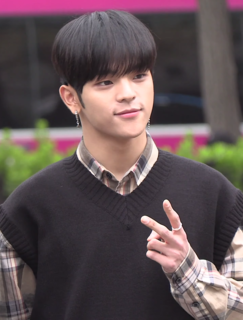 Kim Woo-jin, also known mononymously as Woojin (우진), is a South Korean singer and actor. He was signed to JYP Entertainment and was a member of the boy group Stray Kids from their formation through the eponymous survival show in 2017 until his departure two years later. He signed with 10x Entertainment in his endeavor to launch a solo career. Amidst his transition to a soloist, he faced accusations of sexual misconduct by anonymous women on social media website Twitter. He denied the allegations and an investigation found various forms of fabrication from the accusers. He released his debut mini-album The Moment : A Minor and its lead single "Ready Now" in August 2021.

The following is a list of notable events and releases that have happened, or are expected to happen in 2022 in music in South Korea.

In the Soop: Friendcation is a South Korean reality show created by Hybe Corporation. A spin-off of the In the Soop series that originally featured BTS and then Seventeen, it stars V of BTS, Park Seo-joon, Choi Woo-shik, Park Hyung-sik, and Peakboy. Comprising four episodes, the show follows the fivesome as they embark on a four-day vacation trip together. It premiered on July 22, 2022, on the South Korean pay television network JTBC and global over-the-top streaming platform Disney+. Episodes air first on JTBC, at 9PM KST, and then two hours later on Disney+.