The Pecos River (Spanish : Río Pecos) originates in north-central New Mexico and flows into Texas, emptying into the Rio Grande. Its headwaters are on the eastern slope of the Sangre de Cristo mountain range in Mora County north of Pecos, NM, at an elevation of over 12,000 feet (3,700 m) feet. [4] The river flows for 926 miles (1,490 km) before reaching the Rio Grande near Del Rio. Its drainage basin encompasses about 44,300 square miles (115,000 km2). [2]

The name "Pecos" derives from the Keresan (Native American language) term for the Pecos Pueblo, [p'æyok'ona]. [5]

The river played a large role in the exploration of Texas by the Spanish. In the latter half of the 19th century, "West of the Pecos" was a reference to the rugged desolation of the Wild West. The Texas storekeeper, bartender, and justice of the peace, Roy Bean, a native of Kentucky, was often described as "The Only Law West of the Pecos", a phrase made popular from the 1956 syndicated television series, Judge Roy Bean , with Edgar Buchanan in the starring role. In the series narration, "West of the Pecos" is described as:

the wildest spot in the United States ... virtually beyond the reach of the authorities, the railroads, then pushing their way west, attracted the most vicious characters in the country. It was said that all civilization and law stopped at the east bank of the Pecos. It took one man, a lone storekeeper who was sick of the lawlessness, to change all this. His name was Judge Roy Bean." [6]

Multiple dams have been built along the Pecos River. Santa Rosa Lake is 117 miles/188 km east of Albuquerque. [9] Sumner Lake, formed by the 1939 Sumner Dam, is located between Santa Rosa and Fort Sumner, NM. [10] Two dams are located north of Carlsbad, New Mexico, at Avalon Dam and Brantley Dam, to help irrigate about 25,000 acres (10,000 ha) as part of the Carlsbad reclamation project (established in 1906). Texas has also dammed the river at the Red Bluff Dam in the western part of that state to form the Red Bluff Reservoir. The portion of the reservoir that extends into New Mexico forms the lowest point in that state.

The Pecos River Flume is an aqueduct carrying irrigation water over the Pecos River. Construction took place from 1889 to 1890 and was part of the Pecos River Reclamation Project. It was originally constructed of wood and spanned 145 feet (44 m). It carried water at a depth of 8 feet (2.4 m). In 1902, a flood destroyed the flume and it was subsequently rebuilt using concrete. In 1902, it was identified as the largest concrete aqueduct in the world. [12] [13]

The flume and its surrounding area have been reclaimed by the city of Carlsbad and transformed into a tourist attraction, with park improvements along the river and spotlights to give a spectacular nightly view. 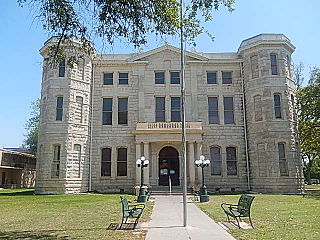 Val Verde County is a county located on the southern Edwards Plateau in the U.S. state of Texas. The 2010 population is 48,879. Its county seat is Del Rio. In 1936, Val Verde County received Recorded Texas Historic Landmark number 5625 to commemorate its founding. 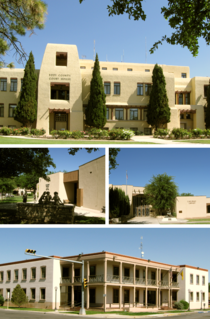 Carlsbad is a city in and the county seat of Eddy County, New Mexico, United States. As of the 2010 census, the city population was 26,138. Carlsbad is centered at the intersection of U.S. Routes 62/180 and 285, and is the principal city of the Carlsbad-Artesia Micropolitan Statistical Area, which has a total population of 55,435. Located in the southeastern part of New Mexico, Carlsbad straddles the Pecos River and sits at the eastern edge of the Guadalupe Mountains. 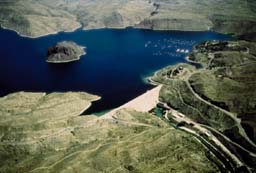 The Rio Grande Gorge is a geological feature in northern New Mexico where the watercourse of the Rio Grande follows a tectonic chasm. Beginning near the Colorado border, the approximately 50-mile (80 km) gorge runs from northwest to southeast of Taos, New Mexico, through the basalt flows of the Taos Plateau volcanic field. The gorge depth is 800 feet (240 m) just south of the Rio Grande Gorge Bridge, which spans the gorge 10 miles (16 km) northwest of Taos. 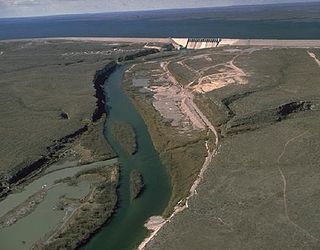 Amistad Reservoir is a reservoir on the Rio Grande at its confluence with the Devils River 12 miles (19 km) northwest of Del Rio, Texas. The lake is bounded by Val Verde County on the United States side of the international border and by the state of Coahuila on the Mexican side of the border; the American shoreline forms the Amistad National Recreation Area. The reservoir was formed in 1969 by the construction of Amistad Dam. The dam and lake are managed jointly by the governments of the United States and Mexico through the International Boundary and Water Commission. The name of the dam and lake is the Spanish word for "friendship". The reservoir is also known as Lake Amistad. 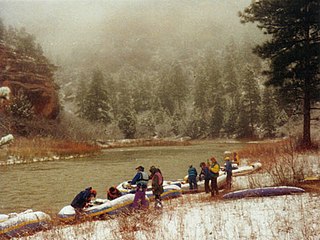 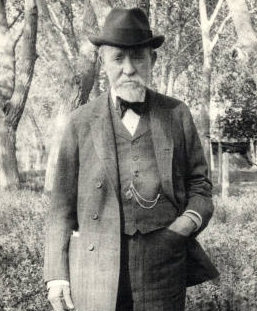 James John (J.J.) Hagerman was an American industrialist who owned mines, railroads and corporate farms in the American West in the late 19th and early 20th centuries. He was one of the most influential men in territorial New Mexico.

The Carlsbad Irrigation District, also known as Carlsbad Reclamation Project or Irrigation system of the Pecos Irrigation and Improvement Company, is a major early water reclamation project located near Carlsbad in southeastern New Mexico. Begun in the 1880s, it is now managed by the United States Bureau of Reclamation, and provides irrigation water to a large area around Carlsbad, diverted from the Pecos River and the Black River. The late 19th and early 20th-century elements of the project were designated a National Historic Landmark District in 1964. 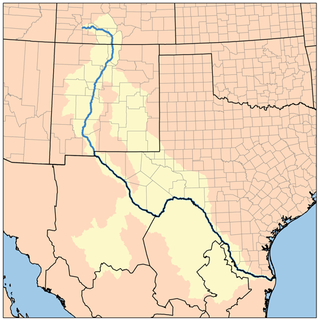 The Rio Grande Project is a United States Bureau of Reclamation irrigation, hydroelectricity, flood control, and interbasin water transfer project serving the upper Rio Grande basin in the southwestern United States. The project irrigates 193,000 acres (780 km2) along the river in the states of New Mexico and Texas. Approximately 60 percent of this land is in New Mexico. Some water is also allotted to Mexico to irrigate some 25,000 acres (100 km2) on the south side of the river. The project was authorized in 1905, but its final features were not implemented until the early 1950s.

The Rio Hondo is a 79-mile-long (127 km) river in southern New Mexico which begins at the confluence of the Rio Bonito and Rio Ruidoso rivers near the town of Hondo, New Mexico. The river flows eastward through the Hondo Valley in the foothills of the Sierra Blanca and Capitan Mountains, roughly paralleling the route of U.S. Route 70 through the towns of Picacho and Tinnie. Near the community of Riverside the river passes through a deep canyon before entering the rolling hills west of Roswell.

Amistad Dam is a major embankment dam across the Rio Grande between Texas, United States, and Coahuila, Mexico. Built to provide irrigation water storage, flood control, and hydropower generation, it is the largest dam along the international boundary reach of the Rio Grande. The dam is over 6 miles (9.7 km) long, lies mostly on the Mexican side of the border, and forms Amistad Reservoir. It supplies water for irrigation in the Rio Grande Valley, 574 miles (924 km) upstream of the Rio Grande's mouth on the Gulf of Mexico at Brownsville, Texas/Matamoros, Tamaulipas.

The San Juan–Chama Project is a U.S. Bureau of Reclamation interbasin water transfer project located in the states of New Mexico and Colorado in the United States. The project consists of a series of tunnels and diversions that take water from the drainage basin of the San Juan River – a tributary of the Colorado River – to supplement water resources in the Rio Grande watershed. The project furnishes water for irrigation and municipal water supply to cities along the Rio Grande including Albuquerque and Santa Fe.

Sumner Dam is a dam on the Pecos River in De Baca County in eastern New Mexico.

Brantley Dam is a flood-control and irrigation water-storage dam on the Pecos River in Eddy County, New Mexico, about 13 miles (21 km) north of Carlsbad, New Mexico, and 10 miles (16 km) upstream from Avalon Dam.

Avalon Dam is a small dam on the Pecos River about 5 miles (8.0 km) north of Carlsbad, New Mexico, United States. The dam is a storage and regulating reservoir, and diverts water into the main canal of the Carlsbad Project, an irrigation scheme.

The Percha Diversion Dam is a structure built in 1918 on the Rio Grande in New Mexico, United States. It diverts water from the Rio Grande into the Rincon Valley Main Canal, an irrigation canal.

Pope's Crossing was a ford on the Pecos River located one mile south of the New Mexico–Texas border on the modern Loving–Reeves county line. Discovered by members of an 1855 expedition tasked with drilling artesian wells east of the Pecos led by U.S. Army topographical engineer John Pope, the ford quickly became the primary crossing of the river on the "upper" military or emigrant road between San Antonio and the ford on the Rio Grande opposite the Mexican town of El Paso del Norte. Heavily used by emigrants, soldiers, traders, and freighters eager to avoid the more difficult and unpredictable crossings further south, Pope's Crossing became a well-traveled part of the network of transcontinental wagon roads that developed across Texas in the 1850s to facilitate settlement and commerce in the southwestern lands recently acquired as a result of the Mexican–American War.