Born in Cartago, Colombia, Rubiano Sáenz studied at the seminary in Popayán before his being ordained as a priest on 8 July 1956. He did pastoral ministry 1956–1971. Pastor and founder of the parishes of "San Pedro Claver" and of "Nuestra Señora de la Providencia". He served as treasurer and pastoral vicar of the archdiocese of Cali and vice-rector of the Major School "Santiago di Cali".

In 1971, he was named Bishop of Cúcuta. He was consecrated only fifteen years after his ordination to the priesthood and just within the canonical limit, on 11 July 1972 in Cali, by Archbishop Angelo Palmas, nuncio to Colombia. He was appointed Coadjutor Archbishop of Cali in 1983 and was transferred to the metropolitan and primatial see of Bogotá, 27 December 1994. From 1990 to 1996, he chaired the Colombian Bishops' Conference.

Pope John Paul II proclaimed Rubiano Sáenz Cardinal-Priest of Trasfigurazione di Nostro Signore Gesù Cristo in the consistory of February 21, 2001. In 2002, he was elected president of the Colombian Episcopal Conference, and he was one of the cardinal electors who participated in the 2005 papal conclave that elected Pope Benedict XVI. Cardinal Rubiano Sáenz's resignation as Archbishop of Bogotá was accepted by Pope Benedict on 8 July 2010. He was apostolic administrator of the archdiocese until the installation of his successor, Archbishop Jesus Salazar Gómez, on August 13, 2010.

Cardinal Rubiano Sáenz has pleaded with pro-lifers worldwide to join in a massive prayer effort to stop abortion from being legalized in the country. [1] He has warned that the procedure leads to an automatic excommunication. [2]

Cardinal Rubiano Saenz has said that the intervention by Venezuelan President Hugo Chávez is not necessary for achieving an agreement over the exchange of prisoners with the Marxists rebel group FARC. [4]

Sáenz has been honored with the following:

Edmund Casimir Szoka was an American prelate of the Roman Catholic Church. He was President Emeritus of the Pontifical Commission for Vatican City State and President Emeritus of the Governorate of Vatican City State, having previously served as Bishop of Gaylord from 1971 to 1981 and Archbishop of Detroit from 1981 to 1990. Szoka was elevated to the cardinalate in 1988.

Alfonso López Trujillo was a Colombian Cardinal Bishop of the Roman Catholic Church and president of the Pontifical Council for the Family.

The Latin American Episcopal Council, better known as CELAM, is a council of the Roman Catholic bishops of Latin America, created in 1955 in Rio de Janeiro, Brazil.

The Archdiocese of Bogotá is a particular church of the Roman Catholic Church in Colombia. It was established in 1562 as the Diocese of Santa Fe en Nueva Granada, elevated to an archdiocese two years later, and was given its current name in 1891. It serves nearly 3.8 million Catholics in Bogotá and parts of the Cundinamarca Department, and covers a total area of 4,109 km2. The current archbishop is Rubén Salazar Gómez since 2010.

Luis Concha Córdoba was a Colombian Cardinal of the Roman Catholic Church. He served as Archbishop of Bogotá from 1959 to 1972, and was elevated to the cardinalate in 1961.

Aníbal Muñoz Duque was a Roman Catholic Cardinal and Archbishop of Bogotá.

Jorge Enrique Serpa Perez is the bishop of the Roman Catholic Diocese of Pinar del Rio.

José Octavio Ruiz Arenas is a Colombian prelate of the Roman Catholic Church, who currently serves as secretary of the Pontifical Council for the Promotion of the New Evangelisation.

Oscar Urbina Ortega is a Colombian prelate of the Roman Catholic Church. He is the second and current Archbishop of Villavicencio.

The Roman Catholic Archdiocese of Cali is an archdiocese located in the city of Cali in Colombia. 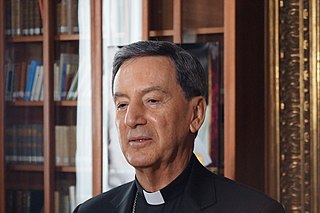 Jesús Rubén Darío Salazar Gómez is Cardinal, and current Archbishop of Bogotá since his installation on 13 August 2010.

Monsignor Isaías Duarte Cancino was a Colombian Catholic priest, who from 1995 until the day of his death was archbishop of the Archdiocese of Cali.

Mario Eduardo Dorsonville-Rodríguez is a Colombian-born bishop of the Catholic Church in the United States. He has been an auxiliary bishop of Washington since 2015.

José Miguel Gómez Rodríguez is a Roman Catholic clergyman and bishop of Facatativá. 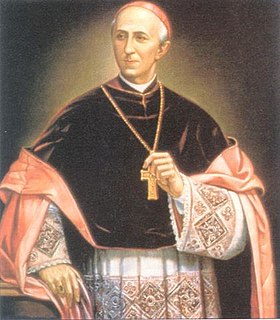 José TelésforoPaúl y Vargas, SJ was a Colombian Catholic bishop and Jesuit who worked in Panama and Colombia. Born in Bogotá, he served as bishop of Panamá from 1876 to 1884 and as archbishop of Santafé en Nueva Granada from 1884 until his death in 1889.

Antonio Claudio Álvarez de Quiñones was a Spanish-born prelate of the Roman Catholic Church in what is now the Dominican Republic and Colombia.

Emilio de Brigard Ortiz was a Colombian prelate of the Catholic Church. From 1944 until his death in 1986, he was an auxiliary bishop of the Archdiocese of Bogotá.