Peeblesshire (Scottish Gaelic : Siorrachd nam Pùballan), the County of Peebles or Tweeddale is a historic county of Scotland. Its county town is Peebles, and it borders Midlothian to the north, Selkirkshire to the east, Dumfriesshire to the south, and Lanarkshire to the west. [1]

After the local government reorganisation of 1975 the county lost its administrative status, and the area was governed as the district of Tweeddale. It currently forms part of the Scottish Borders administrative area.

The coat of arms of the county, which was matriculated by the Lord Lyon in 1931, ia as follows: Quarterly, 1st sable five fraises (strawberry leaves) argent; 2nd azure, a horse's head couped argent; 3rd vert, a fleece or; 4th or, fretty gules, on a chief embattled of the last, two thunderbolts of the first. The arms are supported by two salmon proper, and the crest is a Border cavalryman. The motto is ONWARD TWEEDDALE. The first quarter is the arms of Fraser of Oliver Castle, a prominent local laird; the second, that of Horsburgh, another prominent local laird; the third, a reference to the area's wool industry; and the fourth, that of M. G. (later Sir Michael) Thorburn of Glenormiston, who was sheriff of Peebles at the time of the arms' matriculation. [4]

The county is landlocked and forms part of the Southern Uplands geographic region of Scotland. There are few settlements and the county consists mostly of low hill country, including parts of the Pentland Hills and Moorfoot Hills, with the highest point being Broad Law at 840 m (2,760 ft). The river Tweed is the chief river, flowing in a crescent shape through the county. Bodies of water in Peeblesshire include the Baddinsgill Reservoir, West Water Reservoir and Portmore Loch in the north and the Megget Reservoir, Talla Reservoir and Fruid Reservoir in the south. [ citation needed ]

The county was formerly served by the Peebles Railway and the Symington, Biggar and Broughton Railway, however these lines closed in the 1950s-60s and there are now no active railways in the county. 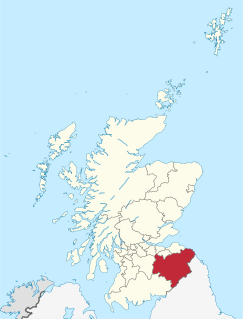 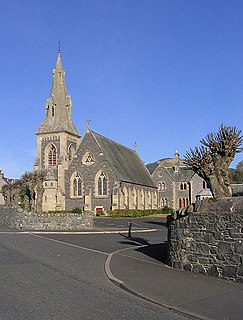 Innerleithen is a civil parish and a small town in the committee area of Tweeddale, in the Scottish Borders. It was formerly in the historic county of Peeblesshire or Tweeddale. 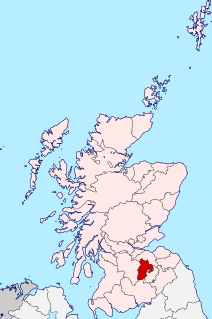 Kilbucho is a small settlement in the parish of Broughton, Glenholm and Kilbucho in the Scottish Borders area of Scotland in Peeblesshire and near Biggar and Broughton. 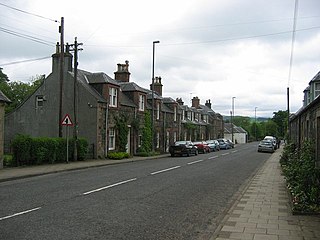 Broughton is a village in Tweeddale in the historical county of Peeblesshire in the Scottish Borders council area, in the south of Scotland, in the civil parish of Broughton, Glenholm and Kilbucho and Upper Tweed Community Council. Broughton is on the Biggar Water, near where it flows into the River Tweed. It is about 7 km east of Biggar, and 15 km west of Peebles.

Walkerburn is a small village in the Scottish Borders area of Scotland, on the A72 about 8 miles (13 km) from Peebles and 10 miles (16 km) from Galashiels. 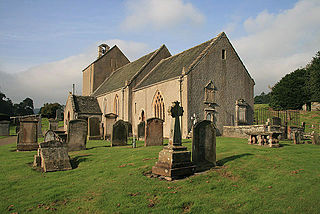 Stobo Kirk is an ancient church of the Church of Scotland. It is dedicated to St Mungo and is situated near the B712 off the A72 just 6 miles south-west of Peebles in the ancient county of Peeblesshire, now part of the Scottish Borders Council area. 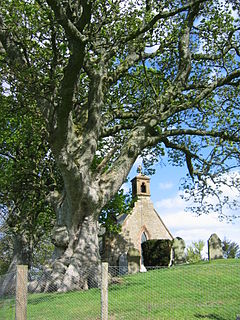 Lyne is a small village and civil parish in the Scottish Borders area of Scotland, 4 miles (6.4 km) west of the market town of Peebles; it lies off the A72, in the old county of Peeblesshire and has an area of about 4 square miles (10 km2).

Darnhall Mains is a farm and settlement off the A703, near Eddleston and the Eddleston Water in the Scottish Borders area of Scotland, in the former Peeblesshire. 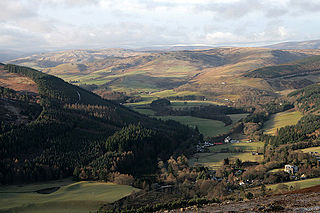 Yarrow is a place and parish in the Scottish Borders area of Scotland and in the former county of Selkirkshire.The name "Yarrow" may derive from the Celtic word garw meaning "rough" or possibly share a derivation with the English name "Jarrow".

Manor is a parish in Peeblesshire in the Scottish Borders, whose church lies on the west bank of Manor Water 3 miles south-west of Peebles. 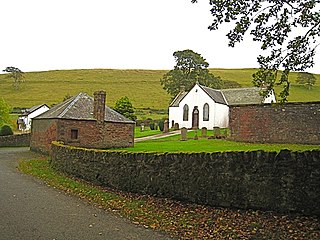 Kirkurd is a parish in Peeblesshire in the Scottish Borders situated 3 miles south-east of Dolphinton and 6 miles north-east of Broughton. Tarth Water, a tributary of Lyne Water forms the northern boundary, with the parishes of Linton and Newlands on the north bank. The parish of Stobo lies to the east and south, the parish of Broughton, Glenholm and Kilbucho to the south, Skirling and Dolphinton (Lanarkshire) to the east. 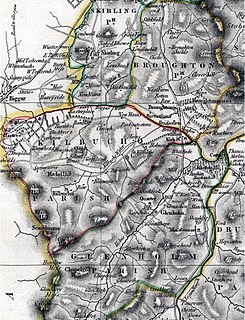 Broughton, Glenholm and Kilbucho is a parish in Peeblesshire in the Scottish Borders, 11 miles south-west of Peebles, lying in the upper part of the valley of the River Tweed in the Southern Uplands. It is a union of three former parishes of bearing these names and the united parish is bound by Kirkurd on the north, Stobo on the east, Drumelzier on the south-east, Culter and Biggar, South Lanarkshire on the west and by Skirling in the north-west. For 4½ miles the eastern border of the parish follows the northward flowing Tweed. It is 9½ miles long north-to-south and 3½ miles wide. The only village is Broughton. 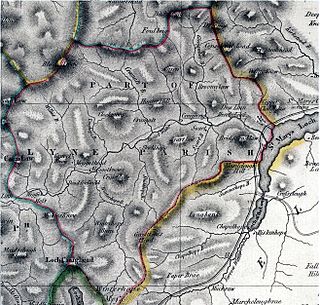 Megget is a former chapelry or parish containing the valley of Megget Water, now forming the westernmost part of the parish of Yarrow, Selkirkshire in the Scottish Borders area of Scotland. The centre of the valley is 19 miles west of Selkirk.

Skirling is a parish, community council area and village in Peeblesshire in the Scottish Borders situated 2½ miles east of Biggar in Lanarkshire. Biggar Water, a tributary the River Tweed forms the southern boundary of the parish with the parish of Broughton, Glenholm and Kilbucho. It is also bounded by that parish on the east, namely the Broughton part of it. On the north it is bounded by the parish Kirkurd in Peeblesshire. Spittal Burn forms most of its western boundary with Lanarkshire. 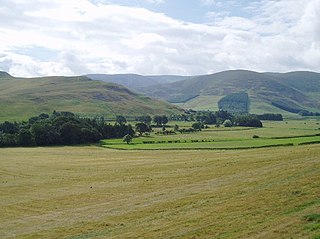 The Upper Tweeddale National Scenic Area lies in the Borders region of Scotland. It is one of 40 national scenic areas (NSA) in Scotland, which are defined so as to identify areas of exceptional scenery and to ensure their protection from inappropriate development. The designated area covers 12,770 ha of countryside surrounding the upper reaches of the River Tweed between Broughton and Peebles. 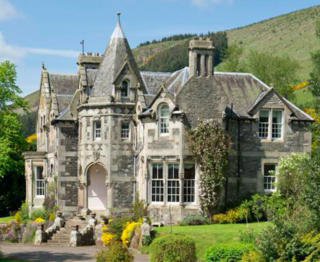 The Kirna, known locally as Kirna House, is a Category A listed villa in Walkerburn, Peeblesshire, Scotland. It is one of four villas in Walkerburn designed by Frederick Thomas Pilkington between 1867 and 1869 for the Ballantyne family. It is listed as a fine example of a Pilkington mansion retaining original external features, a fine interior, and for its importance as a Ballantyne property. 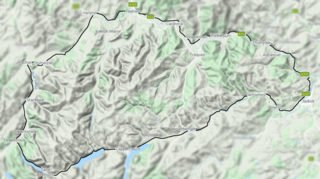 The Manor Hills, also known as the Tweedsmuir Hills, are a range of hills south of Peebles in the Scottish Borders, one of the ranges which collectively form the Southern Uplands. They are separated from the Moffat Hills by the Talla Reservoir, Megget Reservoir and St. Mary's Loch, the Moorfoot Hills by the A72 and the Culter Hills in South Lanarkshire by the A701. The western portion of the hills are designated as the 'Tweedsmuir Hills' Site of Special Scientific Interest and the 'Upper Tweeddale' National Scenic Area, with the major tributary rivers designated as Special Areas of Conservation.