Peeter Siegfried Nikolaus Põld (12 July 1878 – 1 September 1930) was an Estonian pedagogic scientist, school director and politician (member of the Estonian People's Party), and the first Estonian Minister of Education. He was born in Puru, Kreis Wierland, Governorate of Estonia. As curator of the University of Tartu (1918–1925), he oversaw the university's transition to the Estonian language in the newly independent country. 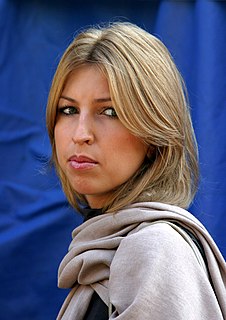 Maarja-Liis Ilus, sometimes better known by her performing name Maarja is a pop musician. She has represented her native Estonia in the Eurovision Song Contest twice. She was only 15 when she participated in the 1996 contest.

Peeter is an Estonian masculine given name. It is the Estonian cognate of the name Peter and may refer to:

Peeter Sauter is an Estonian author, translator and former actor.

"Tii" was the entry of Estonia in the Eurovision Song Contest 2004, performed by Neiokõsõ. It was composed by Priit Pajusaar and Glen Pilvre, and the lyrics, written in the Võro language, spoken in South-Eastern Estonia, were written by Aapo Ilves. 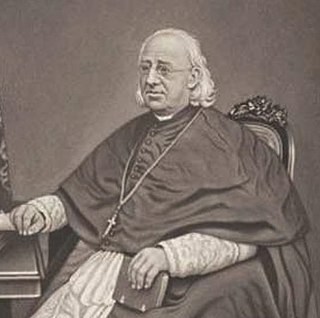 John Bede Polding, OSB was the first Roman Catholic Bishop and then Archbishop of Sydney, Australia.

Starman was an Estonian cable television and Internet service provider company founded in 1992 and located in Tallinn. Since December 2016, Starman Estonia is wholly owned by Elisa.

The Supreme Court of Estonia is the court of last resort in Estonia. It is both a court of cassation and a constitutional court. The courthouse is in Tartu. 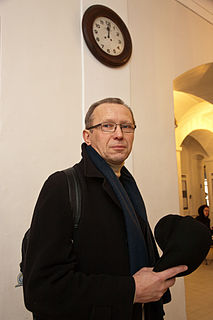 Peeter Torop is an Estonian semiotician. Following Roman Jakobson, he expanded the scope of the semiotic study of translation to include intratextual, intertextual, and extratextual translation and stressing the productivity of the notion of translation in general semiotics. He is a co-editor of the journal Sign Systems Studies, the oldest international semiotic periodical, the chairman of the Estonian Semiotics Association and professor of semiotics of culture at Tartu University.

Kõige Suurem Sõber was a long-running children's TV show on Estonian Television in the early 1980s. It featured a big orange furry creature called Leopold and a host of other more or less recurring characters, and is for many Estonians a symbol of childhood and/or children's TV.

Aleksandr Andreevich Rubel is a Ukrainian-born Estonian serial killer convicted of six murders in Tallinn, Estonia. Sentenced as a minor to the maximum punishment allowed by law, he was released from Tartu Prison on 8 June 2006. Now, Rubel lives in Kharkov, Ukraine.

Puru is a village in Jõhvi Parish, Ida-Viru County in northeastern Estonia.

Peeter Süda was a father of the Estonian organ school, composer and an early collector of Estonian folksongs.

Peeter Kreitzberg was an Estonian politician, member of parliament and a member of the Social Democratic Party. Kreitzberg served as the Estonian Minister of Culture and Education from April to November 1995. He also taught at Tallinn University from 1997 to 2011.

Estonian animation tradition dates back to the 1930s when the first experimental films were made. The only surviving short film from the era is Kutsu-Juku seiklusi (1931). After the Great Depression, World War II, and Soviet Occupation interrupted its development, Estonian animation was reborn in 1958. Elbert Tuganov founded a puppet film division Nukufilm in Tallinnfilm Studio. The first film was titled Peetrikese unenägu based on a Danish writer Jens Sigsgaard's children story Palle alene i verden. Joonisfilm a traditional cell animation division of Tallinnfilm was founded by Rein Raamat in 1971. Films like Põld (1978), nominee for Golden Palm at the Cannes Film Festival in 1979; Lend (1973), the winner of Special Jury Award at the Zagreb World Festival of Animated Films; the Suur Tõll (1980), 2nd place at Ottawa International Animation Festival in 1982 and Põrgu (Hell) (1983), the winner of FIPRESCI Prize and Special Jury Award at the Annecy International Animated Film Festival made Raamat the first internationally recognized Estonian animation director.

Põld is an Estonian surname, and may refer to: 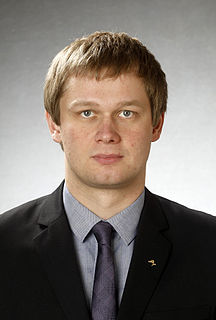 Remo Holsmer is an Estonian former basketball player and politician who represented the Estonian Reform Party in the Riigikogu from 2011 to 2018. He was a player for BC Kalev, and later, was the manager of the team from 2005 to 2009.