Like the Kangxi dictionary , the Peiwen Yunfu was compiled under the patronage of the Kangxi Emperor, whose imperial library was named Peiwen ("esteem/admire writing/phrases/literature"). He believed that previous Chinese dictionaries of multiple-character phrases, including the Yuan Dynasty Yunfu qunyu 韻府群玉 and the Ming Dynasty Wuche yunrui 五車韻瑞, were incomplete and sometimes erroneous. Over twenty editors, including Zhang Yushu (張玉書, 1642–1711) and Chen Tingjing (陳廷敬, 1638–1712), began the compilation in 1704 and finished in 1711. In 1716, the emperor ordered the creation of a supplement, the Yunfu shiyi 韻府拾遺, which was completed in 1720.

The Peiwen yunfu is a large dictionary (212 卷 "volumes; fascicles") of two-, three-, and four-character idioms. It contains roughly 560,000 items under 10,257 entries arranged by 106 rhymes. Classical allusions and phrases are classified under the rhyme of their last character, with numerous quotations given to illustrate usage.

Although the Peiwen yunfu, which James Legge calls the "Kangxi Thesaurus", [1] is less famous than the Kangxi dictionary, it can be helpful in tracing literary usages. "Whenever names or phrases are met with which are not understood," say Teng and Biggerstaff, "this is the first work which should be consulted." [2] 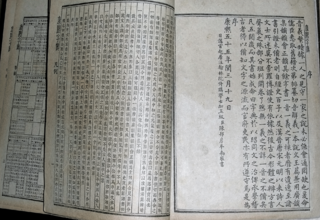 The Kangxi Dictionary is the standard Chinese dictionary during the 18th and 19th centuries. The Kangxi Emperor of Qing Dynasty ordered its compilation in 1710. It used the earlier Zihui system of 214 radicals, today known as 214 Kangxi radicals, and was published in 1716. The dictionary is named after the Emperor's era name.

A rime table or rhyme table is a Chinese phonological model, tabulating the syllables of the series of rime dictionaries beginning with the Qieyun (601) by their onsets, rhyme groups, tones and other properties. The method gave a significantly more precise and systematic account of the sounds of those dictionaries than the previously used fǎnqiè analysis, but many of its details remain obscure. The phonological system that is implicit in the rime dictionaries and analysed in the rime tables is known as Middle Chinese, and is the traditional starting point for efforts to recover the sounds of early forms of Chinese. Some authors distinguish the two layers as Early and Late Middle Chinese respectively.

The Qieyun is a Chinese rhyme dictionary, published in 601 during the Sui dynasty. The book was a guide to proper reading of classical texts, using the fanqie method to indicate the pronunciation of Chinese characters. The Qieyun and later redactions, notably the Guangyun, are important documentary sources used in the reconstruction of historical Chinese phonology. 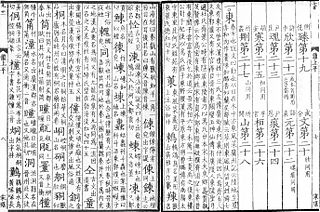 The Guangyun is a Chinese rime dictionary that was compiled from 1007 to 1008 under the patronage of Emperor Zhenzong of Song. Its full name was Dà Sòng chóngxiū guǎngyùn. Chen Pengnian and Qiu Yong (邱雍) were the chief editors.

The Jiyun is a Chinese rime dictionary published in 1037 during the Song Dynasty. The chief editor Ding Du (丁度) and others expanded and revised the Guangyun. It is possible, according to Teng and Biggerstaff (1971:147), that Sima Guang completed the text in 1067. The Jiyun has 53,525 character entries, approximately twice as many as the Guangyun, and likewise has 206 rime groups. 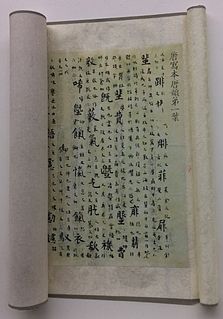 A rime dictionary, rhyme dictionary, or rime book is an ancient type of Chinese dictionary that collates characters by tone and rhyme, instead of by radical. The most important rime dictionary tradition began with the Qieyun (601), which codified correct pronunciations for reading the classics and writing poetry by combining the reading traditions of north and south China. This work became very popular during the Tang dynasty, and went through a series of revisions and expansions, of which the most famous is the Guangyun (1007–1008).

The Dai Kan-Wa Jiten is a Japanese dictionary of kanji compiled by Tetsuji Morohashi. Remarkable for its comprehensiveness and size, Morohashi's dictionary contains over 50,000 character entries and 530,000 compound words. Haruo Shirane (2003:15) says: "This is the definitive dictionary of the Chinese characters and one of the great dictionaries of the world."

The Zhonghua Da Zidian is an unabridged Chinese dictionary of characters, originally published in 1915 by the Zhonghua Book Company in Shanghai. The chief editors were Xu Yuan'gao (徐元誥), Lufei Kui (陆费逵), and Ouyang Pucun (歐陽溥存/欧阳溥存). It was based upon the 1716 Kangxi Zidian, and is internally organized using the 214 Kangxi radicals. The 1915 publication contains more than 48,000 entries for individual characters, including many invented in the two centuries since the Kangxi Dictionary, making it the largest character dictionary of its time.

The Zhongwen Da Cidian, also known in English as the Encyclopaedic Dictionary of the Chinese Language, is an unabridged Chinese dictionary, edited by Zhang Qiyun and others. The first edition had 40 volumes including its radical index in volume 39 and stroke index in volume 40. It was published from 1962 through 1968.

The Shenglei 聲類, compiled by the Cao Wei dynasty lexicographer Li Deng 李登, was the first Chinese rime dictionary. Earlier dictionaries were organized either by semantic fields or by character radicals. The last copies of the Shenglei were lost around the 13th century, and it is known only from earlier descriptions and quotations, which say it was in 10 volumes and contained 11,520 Chinese character entries, categorized by linguistic tone in terms of the wǔshēng 五聲 "Five Tones " from Chinese musicology and wǔxíng 五行 "Five Phases/Elements" theory.

The Zilin or Forest of Characters was a Chinese dictionary compiled by the Jin dynasty (265–420) lexicographer Lü Chen (呂忱). It contained 12,824 character head entries, organized by the 540-radical system of the Shuowen Jiezi. In the history of Chinese lexicography, the Zilin followed the Shuowen Jiezi and preceded the Yupian.

The Yunhai jingyuan 韻海鏡源 Ocean of Rhymes, Mirror of Sources Chinese dictionary, which was compiled by the Tang dynasty official and calligrapher Yan Zhengqing (709–785), was the first phonologically-arranged rime dictionary of words rather than characters. Although the Yunhai jingyuan is a lost work, several later dictionaries, such as the (1711) Peiwen Yunfu, followed its system of collating entries by the tone and rime of the last character in a term.

Matsu dialect is the local dialect of Matsu Islands, Taiwan. Native speakers also call it Bàng-huâ (平話), meaning the language spoken in everyday life. It is recognised one of the statutory languages for public transport announcements in Lienchiang County, Republic of China (ROC).

A Dictionary of the Chinese Language, in Three Parts or Morrison's Chinese dictionary (1815-1823), compiled by the Anglo-Scottish missionary Robert Morrison was the first Chinese-English, English-Chinese dictionary. Part I is Chinese-English arranged by the 214 Kangxi radicals, Part II is Chinese-English arranged alphabetically, and Part III is English-Chinese also arranged alphabetically. This groundbreaking reference work is enormous, comprising 4,595 pages in 6 quarto volumes and including 47,035 head characters taken from the 1716 Kangxi Dictionary. However, Morrison's encyclopedic dictionary had flaws, notably failing to distinguish aspirated consonants: the pronunciation taou is given for both aspirated táo and unaspirated dào.

A Syllabic Dictionary of the Chinese Language: Arranged According to the Wu-Fang Yuen Yin, with the Pronunciation of the Characters as Heard in Peking, Canton, Amoy, and Shanghai or the Hàn-Yīng yùnfǔ 漢英韻府 (1874), compiled by the American sinologist and missionary Samuel Wells Williams, is a 1,150-page bilingual dictionary including 10,940 character headword entries, alphabetically collated under 522 syllables. Williams' dictionary includes, in addition to Mandarin, Chinese variants from Middle Chinese and four regional varieties of Chinese, according to the 17th-century Wufang yuanyin 五方元音 "Proto-sounds of Speech in All Directions".

Pingshui Rhyming Scheme is a rhyming system of the Middle Chinese language. Compiled in the Jin Dynasty, Pingshui Yun is one of the most popular rhyming system in Chinese poetry after Tang Dynasty and the official standard in later dynasties.