Denis St George Daly was an Irish polo player in the 1900 Summer Olympics.

Nicholas Ponting is a former professional badminton player from England.

(Francis) Benedict Hunt-Davis is a former British competition rower and an Olympic champion.

James Henry "Jim" Hunt is an American sailor and Olympic Champion. He competed at the 1960 Summer Olympics in Rome and won a gold medal in the 5.5 metre class, with the boat Minotaur. a boat his father, C Raymond Hunt,designed.

David Charles Gower Hunt is an English sailor. He won a silver medal in the Tempest class with Alan Warren at the 1972 Summer Olympics.

Bryce Hunt is an American former competition swimmer who represented the United States at the 2004 Summer Olympics in Athens, Greece. Hunt competed in the men's 200-meter backstroke and advanced to the event semifinals, where he recorded a time of 1:59.74—the tenth-best time of the 2004 Olympics.

Jeff Hunt is an Australian long-distance runner. At the 2012 Summer Olympics, he competed in the Men's marathon, finishing in 63rd place.

Arthur William James Hunt was a water polo player from Lambeth, United Kingdom. He was a competitor at the 1924 Summer Olympics who competed at the Men's Water Polo event representing Great Britain. His team lost to Hungary in round one at 6-7 and did not advance any further. 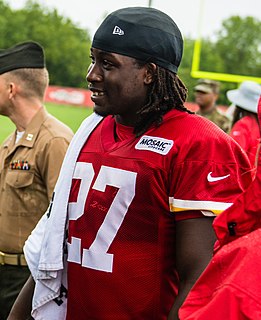 Kareem Asen Jeremy Hunt is an American football running back for the Cleveland Browns of the National Football League (NFL). He played college football at Toledo and was drafted by the Kansas City Chiefs in the third round of the 2017 NFL Draft. As a rookie in 2017, he led the NFL in rushing yards and was selected to the Pro Bowl. Hunt was released by the Chiefs on November 30, 2018, after a videotape of him kicking a woman on the ground in February of the same year surfaced on the internet.

Jamie Hunt is a New Zealand sailor. He competed at the 2004 Summer Olympics in Athens, in the men's 470 class.

Helen Stewart Hunt is a Canadian former swimmer from Vancouver. At the 1954 British Empire and Commonwealth Games, Stewart won a silver medal in the 4×110 yd freestyle relay. The next year, at the 1955 Pan American Games, she won a gold medal and two silver medals. She competed in two events at the 1956 Summer Olympics. After her swimming career, she was a member of the Canadian women's volleyball team at the 1967 Pan American Games and the 1971 Pan American Games. She is the sister of Mary Stewart. Stewart is married to Ted Hunt, a professional football player and member of the Canadian Olympic ski-jumping team, as well as a rugby and lacrosse player. Olympic snowboarder and politician Alexa Loo is her niece.

William Hunt was an Australian sprinter. He competed in the men's 100 metres at the 1920 Summer Olympics.

Christine Hunt was an Australian athlete. She competed in the women's javelin throw at the 1976 Summer Olympics.

Colin Hunt was a British basketball player. He competed in the men's tournament at the 1948 Summer Olympics.