The Pentlatch or Puntlatch or Puntledge language is a Salishan language that was spoken on Canada's Vancouver Island in a small area between Comox and Nanaimo, British Columbia. The Pentlatch people formerly numbered at least 3,000 with at least 90 settlements in the area, but were decimated by smallpox and then by conflicts. The language became extinct in the 1940s after the death of the last fluent speaker in 1940. [2]

The name of this people and their language survives on the modern map as that of the Puntledge River, the Comox Valley locality of Puntledge and the name of the Pentledge 2 Indian Reserve, now allocated to the K'ómoks First Nation band government. [3] [4]

The K’ómoks or K'omoks, usually known in English as the Comox people, are an indigenous group of Coast Salishan-speaking people in Comox, British Columbia and in Toba Inlet and the Malaspina Peninsula areas of the British Columbia mainland across Georgia Strait. They historically spoke the Komox language (Comox-Sliammon), and were divided in two main dialect and tribal groupings, which are known by academics as Island Comox and Mainland Comox. 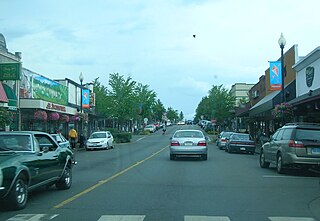 Courtenay is a city on the east coast of Vancouver Island, in the Canadian province of British Columbia. It is the largest community and only city in the area commonly known as the Comox Valley, and the seat of the Comox Valley Regional District, which replaced the Comox-Strathcona Regional District. Courtenay is 4 km (2.5 mi) west of the town of Comox, 7 km (4.3 mi) northeast of the village of Cumberland, 5 km (3.1 mi) northwest of the unincorporated settlement of Royston, and 108 km (67 mi) northwest of Nanaimo. Along with Nanaimo and Victoria, it is home to The Canadian Scottish Regiment, a Primary Reserve infantry regiment of the Canadian Armed Forces. 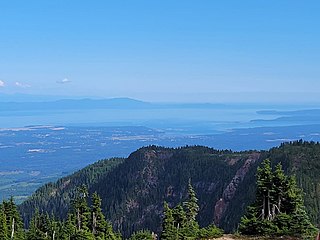 The Comox Valley is a region on the east coast of Vancouver Island, British Columbia, Canada, that includes the city of Courtenay, the town of Comox, the village of Cumberland, and the unincorporated settlements of Royston, Union Bay, Fanny Bay, Black Creek, and Merville. The communities of Denman Island and Hornby Island are also considered part of the Comox Valley. The Comox Valley contains the 47th largest metropolitan area in Canada with a population of about 66,000 as of 2016. 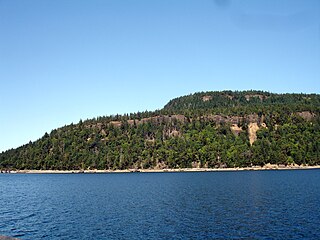 Hornby Island of British Columbia, Canada, is one of the two northernmost Gulf Islands, located near Vancouver Island's Comox Valley, the other being Denman Island.

Union Bay is south of Hart Creek on the east coast of central Vancouver Island, British Columbia. This Comox Valley community on BC Highway 19A is by road about 93 kilometres (58 mi) north of Nanaimo, and 14 kilometres (9 mi) south of Courtenay.

Cumberland is an incorporated village municipality east of Perseverance Creek near the east coast of central Vancouver Island, British Columbia. This Comox Valley community, west of BC Highway 19, is by road about 105 kilometres (65 mi) northwest of Nanaimo, and 10 kilometres (6 mi) southwest of Courtenay.

Black Creek is a community on the eastern side of Vancouver Island, British Columbia, Canada. It is approximately 16 kilometres (9.9 mi) north of Courtenay. It is primarily an agricultural hamlet and bedroom community to Courtenay and Campbell River - approximately 20 kilometres (12 mi) to the north. It is part of Electoral Area C in the Comox Valley Regional District.

Tk’emlúps te Secwépemc, abbreviated TteS and previously known as the Kamloops Indian Band, is a First Nations government within the Shuswap Nation Tribal Council, which represents ten of the seventeen Secwepemc band governments, all in the southern Central Interior region, spanning the Thompson and Shuswap districts. It is one of the largest of the 17 groups into which the Secwepemc (Shuswap) nation was divided when the Colony of British Columbia established an Indian reserve system in the 1860s.

Denman Island, or Sla-dai-aich (Taystayic), its indigenous name, is one of the Northern Gulf Islands and part of the Comox Valley Regional District of British Columbia, Canada, and is home to a small community of 1,165 year-round residents.

School District 71 Comox Valley is a school district on Vancouver Island in British Columbia, Canada. This includes the communities of Courtenay, Comox and Cumberland as well as the surrounding rural areas and the adjacent islands of Denman and Hornby.

The Skway First Nation,, is a band government of the Stó:lō people living in the Fraser Valley of British Columbia, Canada near the city of Chilliwack. They traditionally speak the Upriver dialect of Halkomelem, one of the Salishan family of languages. The band is a member government of the Sto:lo Nation tribal council, and should not be confused with the Skwah First Nation, which is in the same area but is a different band..

The Wuikinuxv Nation, also known as the Oweekeno Nation, is a First Nations band government whose traditional territory is the shores of Rivers Inlet and Owikeno Lake in the Central Coast region of the Canadian province of British Columbia, in the area south of Bella Bella and north of Queen Charlotte Strait. The Wuikinuxv people a.k.a. the Oweekeno people reside in the area of Rivers Inlet and Owikeno Lake, primarily at a village on the Wannock River. Substantial numbers of Wuikinuxv also reside away from the traditional territory in Port Hardy on Vancouver Island and in larger BC communities such as Campbell River, Vancouver and Victoria. Approximately 80 people reside at the village while overall membership was 283 in 2006, 194 of whom lived off-reserve. 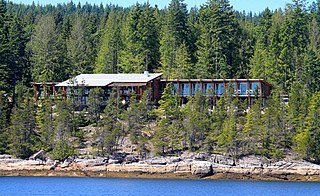 The ƛoʔos Klahoose are one of the three groups comprising the ʔayʔaǰuθəm Tla'Amin or Mainland Comox. The other two divisions of this once-populous group are the χʷɛmaɬku Homalco and Sliammon. The Klahoose, Homalco and Sliammon are, according to oral tradition, the descendants of the survivors of the Great Flood. The three groups were split by colonialism into different band councils but united historically as the Tla A'min, known as the Mainland Comox, and K’ómoks, the larger grouping of the Comox people, also known as the Island Comox and before the merger with the Laich-kwil-tach culture. Historically both groups are a subgroup of the Coast Salish though the K’ómoks name is from, and their language today, is the Lik'wala dialect of Kwak'wala. The ancestral tongue is the Comox language, though the Sahtloot/Island dialect is extinct. 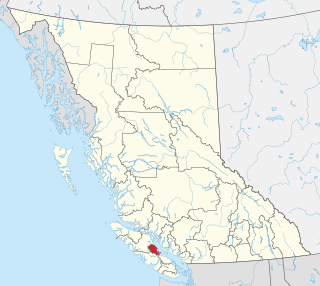 The Strathcona Regional District is a regional district in British Columbia, Canada. It was created on February 15, 2008, encompassing the northern and western portions of the former Regional District of Comox-Strathcona. The partition left the new Strathcona Regional District with 91.6 percent of the former Comox-Strathcona's land area, but only 42.1 percent of its population. Its current territory has a land area of 18,329.948 km2 and a 2016 census population of 44,671 inhabitants. There are 21 named Indian reserves within its territory, with a combined 2016 census population of 1,579 and combined land area of 16.444 km2.

The K'ómoks First Nation, also known as the Comox Indian Band, is the band government of the Island Comox or K'ómoks people of Vancouver Island, British Columbia, Canada. Closely allied to the Cape Mudge and Campbell River First Nations, historically they were a Coast Salish people since integrated into Kwakwaka'wakw society. Originally part of the Laich-kwil-tach Council of Chiefs, which is a treaty society, they are now negotiating independently in the BC Treaty Process. They remain a member government of the Kwakiutl District Council.

Obedjiwan is a First Nations reserve and village on the north shore of Gouin Reservoir in the Mauricie region of Quebec, Canada. It belongs to the Atikamekw of Opitciwan band of the Atikamekw Nation.