Last updated August 01, 2020
Not to be confused with People's Movement of Ukraine for Unity.
Ukrainian pro-independence organisation, then political party

The People's Movement of Ukraine (Ukrainian : Народний Рух України, romanized: Narodnyi Rukh Ukrajiny) is a Ukrainian centre-right political party. Often it is simply referred to as the Movement (Ukrainian : Рух, Rukh). The party under the name Rukh was an observer member of the European People's Party (EPP) until 2013.

Rukh gathers most of its voters and support from Western Ukraine. In November 2016, the party had 35,000 members. [4]

Initially organized as the People's Movement of Ukraine for Reconstruction (i.e. for Perestroika), Rukh was founded in 1989 as a civil-political movement as there were no other political parties allowed in the Soviet Union but the Communist Party. The founding of Rukh was made possible due to Soviet General Secretary Mikhail Gorbachev's Glasnost policies. [10] The program and statutes of the movement were proposed by the Writers Association of Ukraine and were published in the journal Literary Ukraine (Literaturna Ukraina) on 16 February 1989. The organization has its roots in Ukrainian dissidents — the most notable of them being Viacheslav Chornovil — yet not excluding the fact that it was accepting various other politically oriented members from liberal communists to integralist nationalists. From March to September 1989 numerous constituent party conferences took place across Ukraine. The first Constituent Congress of the "People's Movement of Ukraine for Reconstruction" took place on 8–10 September 1989 in Kiev. Elected as the first leader of the movement was the Ukrainian poet and screenwriter Ivan Drach.

Appearance of the organization coincided with dismissal of Volodymyr Shcherbytsky as the First Secretary of Central Committee of the Communist Party of Ukraine and rise of Leonid Kravchuk. On one hand Kravchuk officially promised that "faster he will grow hair on his palm than Rukh will be registered", on the other hand according to author of the book "People's Movement of Ukraine. History" (Ukrainian : Народный рух Украины. История), Hryhoriy Honcharuk, with reference to Ivan Drach, it was Kravchuk who facilitated publishing of the Rukh's program draft in "Literaturna Ukrayina" in February 1989. [11] And according to rumors, he also approved that the rector of KPI Talanchuk would grant the Politech's Assembly Hall to hold the Rukh's constituent congress. [11]

The official Soviet press and government portrayed members as anti-Semites at first. [12]

The movement's biggest public, political, cultural, and social actions were:

At first the movement aimed at supporting Gorbachev's reforms, [10] later the People's Movement of Ukraine was instrumental in conducting an independence referendum in the Ukrainian SSR. This was partially due to the Russification policies of the Soviet Union when the USSR Supreme Soviet officially announced the Russian language as the singular official state language of the country in 1989. During Rukh's existence within the Soviet Union, its members were threatened and intimidated. [10] In the western oblasts "Rukh" became colloquially known as an abbreviation for the call Save Ukraine, fellows! (Рятуйте Україну, Хлопці!). [13] [14] [15]

The movement initially registered by the Ministry of Justice on 9 February 1990 as the political party. After the creation of the Ukrainian Republican Party (URP) in January 1990 and later the Democratic Party of Ukraine (DemPU), the People's Movement of Ukraine unofficially existed as a coalition of those two along with numerous other smaller factions. These parties created a group within the Verkhovna Rada called the "Democratic Bloc" which stood in opposition to "Group 239", which was led by Oleksandr Moroz ("For the sovereign Soviet Ukraine") (see 1990 Ukrainian parliamentary election). In October 1990 Rukh's second Party Congress took place. During the session it was decided to exclude the word "Reconstruction" (Perestroika), not to be associated with the Communist movement. Ivan Drach was re-elected as leader, while his deputies became Mykhailo Horyn and Oleksandr Lavrynovych. In order to draw the URP and DemPU closer to Rukh, the "Institute of Associative Membership in the Movement" was established. The brittle coalition of the mentioned parties held until the presidential elections in September 1991 when URP and DemPU provided their own candidates in opposition to Vyacheslav Chornovil.

From 28 February – 1 March 1992 the third Party Congress took place during which a schism within Rukh was avoided by electing a leadership triad of Ivan Drach, Mykhailo Horyn, and Vyacheslav Chornovil. The new deputy leaders were M. Boychyshyn, O. Burakovsky, V. Burlakov, and O. Lavrynovych. The "Institute of Associative Membership in the Movement" was formally recognized as dissolved due to both the URP and DemPU declaring themselves as supporters of state president Leonid Kravchuk. The People's Movement of Ukraine declared its parliamentary opposition to the government and in January 1992 re-registered due to substantial changes in its statutes. Soon Ivan Drach left the party, followed by the resignation of Mykhailo Horyn in June 1992 together with V. Burlakov. Horyn was soon elected as leader of the Ukrainian Republican Party. In December 1992 Rukh's IV Party Congress took place which once again revised its statute and the party's goals. Vyacheslav Chornovil was elected leader, the rest of the party's leadership was left without major changes. During the Congress some party delegates in opposition to Chornovil created the All-National Movement of Ukraine (VNRU), headed by Larysa Skoryk.

The People's Movement of Ukraine was registered by the Ukrainian Ministry of Justice as a political party on 1 February 1993. [2] Rukh's parliamentary faction split up into 2 different factions in the spring of 1999 (the breakaway faction was led by Hennadiy Udovenko with its highest Rada membership of 19 dwindling to 14; the "other" faction ended with 23; meaning that 10 elected People's Movement of Ukraine deputies did not represent any segment of the party anymore by June 2002). [16] [17] Right before the 1999 presidential elections another major schism took place within the party. Yuriy Kostenko openly protested against the election of Viacheslav Chornovil as the party leader and established another party, People's Movement of Ukraine (Kostenko), where Kostenko became the leader of the party. Despite the split a followed party congress elected Vyacheslav Chornovil as party leader. The congress also adopted the signing of an agreement between People's Movement of Ukraine and the Reforms and Order Party for a political bloc supporting Hennadiy Udovenko as a single presidential candidate for the next elections. At the parliamentary elections on 29 March 1998, the party received 9.4% of the vote [2] and 46 seats. At the parliamentary elections on 30 March 2002, the party was part of the Viktor Yushchenko Bloc–Our Ukraine. Currently, Rukh was a part of the Our Ukraine Bloc, [2] where it represented the right wing of the Union's party spectrum. At the parliamentary elections on 26 March 2006, the party was part of the Our Ukraine alliance, [2] and the party's members secured 13 seats in the parliament. At the 2007 parliamentary elections the party was again part of the Our Ukraine–People's Self-Defense Bloc alliance, [2] that won 72 out of 450 seats.

The party competed as one single party under the "umbrella" party "Fatherland", together with several other parties, during the 2012 parliamentary elections [19] [20] [21] [22] [23] [24] During the election this list won 62 seats (25.55% of the votes) under the proportional party-list system and another 39 by winning 39 simple-majority constituencies; a total of 101 seats in Parliament. [25] The party independently unsuccessfully participated in 2 constituencies. [26]

In 2013, the party split in two parts. The party merged with Ukrainian People's Party in May 2013. [27] While its former chairman Borys Tarasyuk and others assimilated into "Fatherland" in June 2013. [28] [29] The bulk of the party organisation and ordinary members remained loyal to the party. [4]

In the 2014 Ukrainian presidential election party leader Vasyl Kuybida received 0.06% of the vote. [30]

In the 2014 Ukrainian parliamentary election the party participated in 3 constituencies; but its candidates lost in all of them and thus the party won no parliamentary seats. [26] [31] [32] However, after being expelled from (the political party) Self Reliance the lawmakers Pavlo Kyshkar and Viktor Kryvenko joined the party in April 2016 (in parliament they both joined the faction of the Petro Poroshenko Bloc in March 2016 before leaving it in December 2017). [4] [33] [34]

On 10 January 2019 Viktor Kryvenko was chosen the People's Movement of Ukraine candidate in the 2019 Ukrainian presidential election and their chairman. [35] [26] In the election he received 0.04% of the vote. [36]

In the 2019 Ukrainian parliamentary election the party had 18 candidates in constituencies, but none of them won a parliamentary seat. [26]

We do not impose on Russia how to interpret its own history. Why did Russia try and continues to try to impose on us the use of the Russian language? Why do Russians want to make us forget our own history and our heroes? Ukrainians must know their history and live accordingly, instead of living by the stereotypes spun by tsarist and Soviet ideologists.

a Temporarily merged with Batkivshchyna as Fatherland – United Opposition

European Solidarity is a political party in Ukraine. It has its roots in a parliamentary group called Solidarity dating from 2000 and has existed since in various forms as a political outlet for Petro Poroshenko.

Ukraine – Forward! is a political party in Ukraine. From its registration in December 1998 till March 2012 it was named Ukrainian Social Democratic Party. The party has, according to official figures, about 86,000 party members. The official name of the party is: Party of Natalia Korolevska "Ukraine – Forward!".

The Ukrainian People's Party is a political party in Ukraine, registered on Old Year's Day 1999 as Ukrainian National Movement. 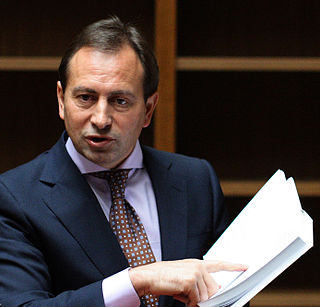 Mykola Volodymyrovych Tomenko is a Ukrainian politician. He has been a member of Ukraine's parliament, the Verkhovna Rada from 2006 until 2016. In 2014, Tomenko became a member of the Petro Poroshenko Bloc, which elected him to the 8th Ukrainian Verkhovna Rada on its party lists during the 2014 parliamentary election. On 25 March 2016 the party Congress of Petro Poroshenko Bloc removed Tomenko's parliamentary mandate using the Imperative mandate provisions of the Ukrainian constitution. This was considered illegal by Tomenko; on 28 July 2016 Ukraine's highest Administrative Court rejected his appeal to gain back his parliamentary seat. 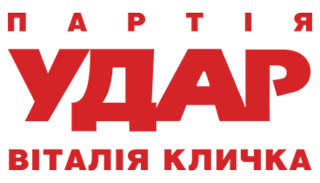 The Ukrainian Democratic Alliance for Reform is a political party in Ukraine headed by retired Ukrainian professional heavyweight boxer and the WBC world heavyweight champion emeritus Vitali Klitschko. The party has been an observer member of the European People's Party (EPP) since 2013.

Civil Position or Civic Position is a political party in Ukraine registered in March 2005. It is led by former Minister of Defence of Ukraine Anatoliy Hrytsenko.

Andriy Anatoliyovych Kozhemiakin is a Ukrainian politician and a former security service officer.

Democratic Alliance is a political party in Ukraine, registered in September 2011, formed on an anti-corruption platform.

}} Union "Self Reliance" or "Self Help" is a Christian democratic, pro-European political party in Ukraine. The party’s leadership is currently vacant as of 21 July 2019. It was founded on 29 December 2012, and identifies with the ideology of "Christian morality and common sense." The name of the party is similar to the name of the NGO, founded by former leader, Andriy Sadovyi in 2004. The party won 33 seats in the 2014 Ukrainian parliamentary election. In the 2019 Ukrainian parliamentary election the party won a single seat.

Opposition Bloc is a pro-Russian Ukrainian political party that was founded in 2014 by the merger of six parties that did not endorse Euromaidan. Legally, the party was created by renaming the lesser-known party Leading force. The party is perceived as the successor of the disbanded Party of Regions.

Movement of New Forces is a Ukrainian political party that was founded as the "Party of Harmonious Development" on February 11, 2015 and renamed in February 2017 by Mikheil Saakashvili.

Opposition Platform — For Life is a political party in Ukraine founded in December 2018 with the aim to contest together the 2019 Ukrainian presidential election and then the 2019 Ukrainian parliamentary election. The party is the successor of For life, formerly All-Ukrainian Union "Center" from 1999 to 2016. It was originally registered in December 1999. In the 2019 parliamentary election the party won 37 seats on the nationwide party list and 6 constituency seats.

Opposition Bloc, formerly called Opposition Bloc — Party for Peace and Development until June 2019, is a Ukrainian political party that was founded in 2019.