The People's Revolutionary Government (PRG) was proclaimed on 13 March 1979 after the New Jewel Movement overthrew the government of Grenada in a revolution. The government suspended the constitution and ruled by decree until a factional conflict broke out, culminating in an invasion by the United States on 25 October 1983.

The New Jewel Movement (NJM) under the leadership of Maurice Bishop was the main opposition party in Grenada during the 1970s. In 1979, the NJM overthrew the government of Eric Gairy, which had ruled the country since independence in 1974. The NJM launched an armed takeover of the radio station, police barracks, and various other key locations in Grenada while Gairy was on a trip outside the country. The armed takeover was conducted by the National Liberation Army (NLA), which had been formed in 1973 as the military wing of the NJM. [1]

The NJM suspended the constitution and announced new laws. Maurice Bishop announced the formation of the PRG over radio, which organized a cabinet to run the country with Bishop as prime minister. All political organizations except for the NJM were banned, and membership in the NJM was thereafter tightly controlled.

Maurice Bishop expressed his objective: "We are a small country, we are a poor country, with a population of African slave descendants, we are part of the exploited Third World and, definitively, our challenge is to seek the creation of a new international order that puts the economy at the service of the people and social justice". The new government worried the United States, which had previously supported Eric Gairy, and whose ambassador warned: "The United States government would dislike any inclination on the part of the Grenadines to develop closer ties with Cuba.

The regime was particularly active in developing social policies: a Centre for Popular Education was established to coordinate government initiatives in education, including literacy campaigns. The learning of Grenada Creole was allowed at school. Nevertheless, the Bishop government's tendency to marginalize the Church's role in education contributed to the deterioration of relations with the clergy. In the health sector, medical consultations were made free of charge with the help of Cuba, which provided doctors, and milk was distributed to pregnant women and children. In economics, the authorities were setting up a system of financial loans and equipment for farmers, and agricultural cooperatives were being set up to develop the activity. The Bishop government was also working to develop infrastructure, including building new roads and upgrading the power grid. Finally, the government was attacking marijuana growing operations to promote food agriculture and reduce violence. The PRG established close relations with the government of Cuba and, with Cuban assistance began construction of a large international airport.

Internationally, Grenada was increasingly isolated. The United Kingdom suspended its economic assistance and the United States used its influence to block loans from the IMF and the World Bank. The situation was also deteriorating internally: on 19 June 1980, a bomb exploded during a meeting during which Bishop was to intervene. The device killed three people and wounded 25. Bishop openly accused "American imperialism and its local agents". However, the real responsibility of the CIA was uncertain; if it had indeed imagined destabilization operations, the Carter administration was opposed to them. In 1983, Bishop finally went to Washington to try to "negotiate peace".

Literacy and health statistics improved dramatically during Bishop's tenure, but economic woes led to a crisis. In 1983, internal divisions occurred within the central committee of the PRG. A group led by Deputy Prime Minister Bernard Coard, a hard-line militaristic element, [2] attempted to convince Bishop to enter into a power-sharing agreement with Coard. Eventually Coard placed Bishop under house arrest and took control of the PRG government. The removal of Bishop led to large popular demonstrations in different areas of the country. In the course of one of these demonstrations, Bishop was freed by the crowd, and eventually reached the PRA headquarters at Fort Rupert.

A unit from the PRA (People's Revolutionary Army) at Fort Frederick was dispatched to Fort Rupert. Fighting broke out between that force and the civilians at Fort Rupert resulting in many deaths. Afterwards, Bishop and seven others, including several cabinet ministers, were rounded up and executed.

After the executions, a new government called the Revolutionary Military Council, led by General Hudson Austin, was formed to rule the country and the PRG ceased to exist. This government nominally ruled for six days before being ousted by the United States invasion of Grenada.

The recorded history of the Caribbean island of Grenada begins in the early 17th century. First settled by indigenous peoples, by the time of European contact it was inhabited by the Caribs. British colonists drove most of the Caribs off the island and established plantations on the island, eventually importing African slaves to work on the sugar plantations. 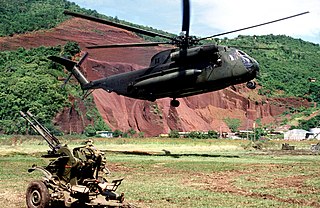 The United States invasion of Grenada began at dawn on 25 October 1983. The U.S. and a coalition of six Caribbean nations attacked the island nation of Grenada, 100 miles (160 km) north of Venezuela. Codenamed Operation Urgent Fury, the multinational intervention resulted in an allied victory within a matter of days. It was triggered by the strife within the People's Revolutionary Government which resulted in the house arrest and execution of the previous leader and second Prime Minister of Grenada Maurice Bishop, and the establishment of the Revolutionary Military Council with Hudson Austin as Chairman. The invasion resulted in the appointment of an interim government, followed by democratic elections in 1984. The country has remained a democratic nation since then.

Sir Eric Matthew Gairy PC was the first Prime Minister of Grenada, serving from his country's independence in 1974 until his overthrow in a coup by Maurice Bishop in 1979. Gairy also served as head of government in pre-independence Grenada as Chief Minister from 1961 to 1962, and as Premier from 1967 to 1974.

Maurice Rupert Bishop was a Grenadian revolutionary and the leader of New Jewel Movement – popular efforts in the areas of socio-economic development, education, and black liberation – that came to power during the 13 March 1979 Coup that removed Eric Gairy from office. Bishop headed the People's Revolutionary Government of Grenada from 1979 to 1983, when he was dismissed from his post and shot during the coup by Bernard Coard, a staunch militaristic element in the government, leading to upheaval.

Winston Bernard Coard is a Grenadian politician who was Deputy Prime Minister in the People's Revolutionary Government of the New Jewel Movement. Coard launched a coup within the revolutionary government and took power for three days until he was himself deposed by General Hudson Austin.

The New Joint Endeavor for Welfare, Education, and Liberation, or New JEWEL Movement (NJM), was a Marxist-Leninist vanguard party in the Caribbean island nation of Grenada that was led by Maurice Bishop. Established in 1973, the NJM issued its manifesto prior to the granting of Independence to Grenada in 1974. The movement took control of the country with a successful revolution in 1979 and ruled by decree as the People's Revolutionary Government until 1983. In 1983, Bishop was killed by paramilitaries affiliated with hard-liners in his own party. This led to a military government, which was deposed by the US military in a 1983 invasion.

Herbert Augustus Blaize PC was a Grenadian politician and leader of the Grenada National Party. When Grenada was still a British Crown Colony he served as the first Chief Minister from 1960 to 1961, and again from 1962 to 1967. He became the first Premier of the autonomous Associated State of Grenada briefly in 1967. In the first elections following the 1983 coups and the American-led invasion of Grenada, he served as Prime Minister from 1984 until his death in 1989.

Sir Paul Godwin Scoon was Governor-General of Grenada from 1978 to 1992. His tenure is notable for its hectic events related to the rise and fall of the People's Revolutionary Government, as well as his personal involvement and support of the Invasion of Grenada.

Maurice Bishop International Airport, formerly known as Point Salines Airport, is an international airport located in the parish of St. George's. The town of St. George's is about 5 mi (8.0 km) north of the airport and is the capital of the island nation of Grenada. The airport is located on Point Salines, the most southwestern point of the island. It is named after former Prime Minister Maurice Bishop, who championed the construction project in 1979.

Hudson Austin is a former general in the People's Revolutionary Army of Grenada. After the killing of Maurice Bishop, he formed a military government with himself as chairman to rule Grenada.

The Royal Grenada Police Force (RGPF) is responsible for law enforcement in Grenada. The RGPF enforces criminal, immigration, and maritime laws. It is also held responsible for seaport security and fire services. With 15 police stations and 900 staff members, the force responds to over 15,000 crimes and incidents per year. The Royal Grenada Police Force also has a paramilitary force for national defense.

The Grenada 17 are the seventeen political, military and civilian figures who were convicted of various crimes associated with the overthrow of the Maurice Bishop's government of Grenada in 1983 and his subsequent murder. 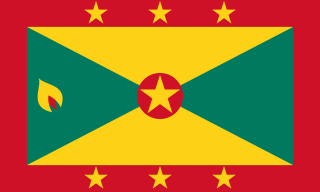 Grenada is a sovereign state in the West Indies in the Caribbean Sea at the southern end of the Grenadines island chain. Grenada consists of the island of Grenada itself plus six smaller islands which lie to the north of the main island. It is located northwest of Trinidad and Tobago, northeast of Venezuela and southwest of Saint Vincent and the Grenadines. Its size is 348.5 square kilometres (134.6 sq mi), and it had an estimated population of 112,200 in July 2018. Its capital is St. George's. Grenada is also known as the "Island of Spice" due to its production of nutmeg and mace crops. The national bird of Grenada is the critically endangered Grenada dove.

The People's Revolutionary Militia, was the militia force created by the New Jewel Movement (NJM) after it seized power to provide local security against sabotage, involve masses in political action and provide a 5,000 member reserve force for the People's Revolutionary Army (PRA). Due to equipment shortages and administrative failings, many PRM members never received uniforms or weapons training. The best trained of the militia units were the Rapid Mobilisation Companies, one of which was provided for each PRA Defence Region.

The People’s Revolutionary Army (PRA) was the military of Grenada between 1979 and 1983.

The National Youth Organization was a youth organization in Grenada. NYO was the youth wing of the New Jewel Movement.

The Mongoose Gang was a private army or militia which operated from 1967 to 1979 under the control of Sir Eric Gairy, the Premier and later Prime Minister of Grenada, and head of the Grenada United Labour Party. Officially, Mongoose Gang members were called Special Reserve Police (S.R.P.) or Volunteer Constables.

Chris Searle is a British educator, poet, anti-racist activist and socialist. He has written widely on cricket, language, jazz, race and social justice, and has taught in Canada, England, Tobago, Mozambique and Grenada. He has been associated with the Institute of Race Relations since the 1970s, and is on the editorial board of Race & Class. He writes a weekly column on jazz for the left-wing newspaper Morning Star.

Jacqueline Creft was a Grenadian politician, one of the leaders of the revolutionary New Jewel Movement and Minister of Education in the People's Revolutionary Government from 1980 to 1983. She was executed in October 1983 along with Maurice Bishop, prime minister of the country and father of her son Vladimir (1977–1994).