Percomorpha are the most diverse group of teleost fish today. Teleosts, and percomorphs in particular, thrived during the Cenozoic era. Fossil evidence shows that there was a major increase in size and abundance of teleosts immediately after the mass extinction event at the Cretaceous-Paleogene boundary ca. 65 Ma ago. [6]

The two cladograms below are based on Betancur-R et al., 2017. [4] Percomorphs are a clade of teleost fishes. The first cladogram shows the interrelationsships of percomorphs with other living groups of teleosts.

The following cladogram shows the evolutionary relationshiops of the various groups of extant percomorph fishes: 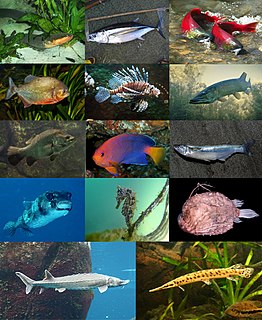 Actinopterygii, members of which are known as ray-finned fishes, is a clade of the bony fishes. They comprise over 50% of living vertebrate species. 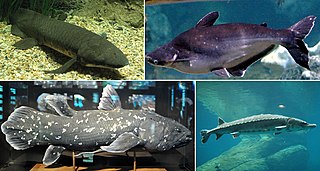 Osteichthyes, popularly referred to as the bony fish, is a diverse taxonomic group of fish that have skeletons primarily composed of bone tissue. They can be contrasted with the Chondrichthyes, which have skeletons primarily composed of cartilage. The vast majority of fish are members of Osteichthyes, which is an extremely diverse and abundant group consisting of 45 orders, and over 435 families and 28,000 species. It is the largest class of vertebrates in existence today. The group Osteichthyes is divided into the ray-finned fish (Actinopterygii) and lobe-finned fish (Sarcopterygii). The oldest known fossils of bony fish are about 420 million years old, which are also transitional fossils, showing a tooth pattern that is in between the tooth rows of sharks and bony fishes.

Perciformes, also called the Percomorpha or Acanthopteri, is an order or superorder of ray-finned fish. If considered a single order, they are the most numerous order of vertebrates, containing about 41% of all bony fish. Perciformes means "perch-like". This group comprises over 10,000 species found in almost all aquatic ecosystems. 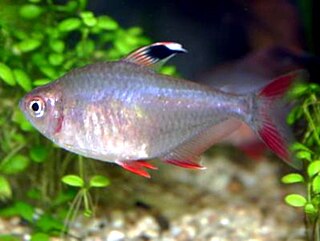 Teleostei, members of which are known as teleosts, is, by far, the largest infraclass in the class Actinopterygii, the ray-finned fishes, containing 96% of all extant species of fish. Teleosts are arranged into about 40 orders and 448 families. Over 26,000 species have been described. Teleosts range from giant oarfish measuring 7.6 m (25 ft) or more, and ocean sunfish weighing over 2 t, to the minute male anglerfish Photocorynus spiniceps, just 6.2 mm (0.24 in) long. Including not only torpedo-shaped fish built for speed, teleosts can be flattened vertically or horizontally, be elongated cylinders or take specialised shapes as in anglerfish and seahorses.

Actinopteri is the sister group of Cladistia in the class Actinopterygii.

Neopterygii is a subclass of ray-finned fish (Actinopterygii). Neopterygii includes the Holostei and the Teleostei, of which the latter comprise the vast majority of extant fishes, and over half of all living vertebrate species. While living holosteans include only freshwater taxa, teleosts are diverse in both freshwater and marine environments. Many new species of teleosts are scientifically described each year. 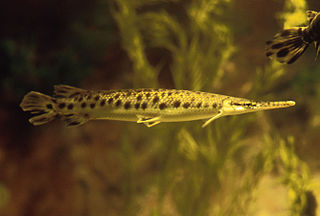 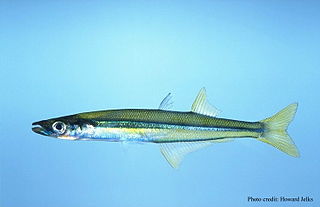 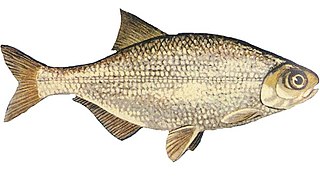 Halecostomi is the name of a group of neopterygian fish uniting the halecomorphs and the teleosts, the largest group of extant ray-finned fish.

Euteleostei, whose members are known as euteleosts, is a clade of bony fishes within Teleostei that evolved some 240 million years ago. It is divided into Protacanthopterygii and Neoteleostei.

Amia, commonly called bowfin, is a genus of bony fish related to gars in the infraclass Holostei. They are regarded as taxonomic relicts, being the sole surviving species of the order Amiiformes, which dates from the Jurassic to the Eocene, persisting to the present. There is one living species in Amia, Amia calva, and a number of extinct species which have been described from the fossil record.

The Trachichthyiformes are an order of ray-finned fishes in the superorder Acanthopterygii.

Ovalentaria is a clade of ray-finned fishes within the Percomorpha, referred to as a subseries. It is made up of a group of fish families which are referred to in Fishes of the World's fifth edition as incertae sedis, as well as the orders Mugiliformes, Cichliformes, and Blenniiformes. It was named by W. L. Smith and T. J. Near in Wainwright et al. (2012) based on a molecular phylogeny, but the authors suggested that the group was united by the presence of demersal eggs that are attached to a substrate. Some authors have used the ordinal name Stiassnyiformes for a clade including Mugiloidei, Plesiopidae, Blenniiformes, Atherinomorpha, and Cichlidae, and this grouping does appear to be monophyletic.

Centrarchiformes is an order of ray-finned fish, sometimes included amongst the perciformes, with 17 families. This order first appeared about 55.8 million years ago in the Eocene Era, and is composed primarily of omnivores. The order has a wide range that includes the continents of Australia and South America. Many Centrarchiformes look essentially perch-like, featuring a stocky build and a spine-bearing dorsal fin, and range in size from 2.5 cm in length, to 1.8 meters for the Maccullochella peelii. The order Centrachiformes is not recognised in the 5th Edition of Fishes of the World.

The phylogenetic classification of bony fishes is a phylogenetic classification of bony fishes and is based on phylogenies inferred using molecular and genomic data for nearly 2000 fishes. The first version was published in 2013 and resolved 66 orders. The latest version was published in 2017 and recognised 72 orders and 79 suborders.