He was one of seven brothers. One of his brothers was the Pakistan Test cricketer of the 1950s Waqar Hasan, and another was the film director and producer Iqbal Shehzad. [1] His brother Waqar married Jamila Razaaq, the daughter of actress Sultana Razaaq, one of the earliest film actresses from India who acted both in silent movies and later in talkies. Jamila is also the granddaughter of India’s first female film director, Fatima Begum [2] and happens to be the great niece of Zubeida (the leading actress of India's first talkie film Alam Ara (1931)), who was the younger sister of her mother Sultana. [3]

He played 19 Tests for Pakistan as a cunning left-arm legspinner whose forte was that he was effective even on unhelpful tracks. In all, he took 59 economical wickets, including five wickets in an innings three times, always against New Zealand. At Auckland in 1964–65 he finished with 5 for 42. In the 1969–70 series, he took 22 wickets at only 15.63, including 5 for 33 at Karachi and his Test-best 7 for 74 at Lahore. [7]

He worked as an assistant to his brother Iqbal Shehzad on several films. [8] His major career was with Pakistan International Airlines, for whom when he retired he was General Manager in Paris. [1] 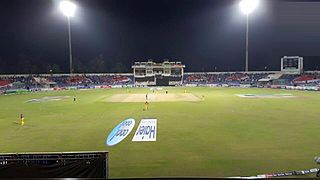 Iqbal Stadium is a Test cricket ground in Faisalabad, Pakistan. Previous names for the ground include Lyallpur Stadium, National Stadium, and City Stadium. The current name honours Pakistani poet Sir Allama Muhammad Iqbal. Capacity is 18,000. It has hosted 25 Test matches and 14 One Day Internationals. 14 of the Tests have been draws. In September 2019, the Pakistan Cricket Board named it as one of the venues to host matches in the 2019–20 Quaid-e-Azam Trophy. 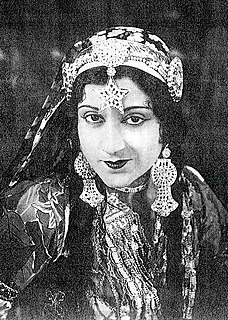 The Quaid-e-Azam Trophy is the premier first-class domestic cricket competition in Pakistan. This season, 14 teams including Bahawalpur will compete in a newly revamped structure. The 2012–13 season Tournament starting from December 26, 2012.

Dildar Mohammad Awan was a Pakistani cricketer who played first-class cricket from 1958-59 to 1972-73.

Zayyad Qayyum Khan is a former Pakistani cricketer. He represented Redco Pakistan Limited in a single first-class match during the 1999–2000 season, having earlier played for the Pakistan national under-19 side.

The 2018–19 Quaid-e-Azam Trophy was a first-class domestic cricket competition that took place in Pakistan from 1 September to 8 December 2018. Following the conclusion of each match, the teams played each other in a List A fixture in the 2018–19 Quaid-e-Azam One Day Cup tournament. Sui Northern Gas Pipelines Limited were the defending champions.