The Peshitta (Classical Syriac : ܦܫܺܝܛܬܳܐ‎orܦܫܝܼܛܬܵܐpšīṭtā) is the standard version of the Bible for churches in the Syriac tradition, including the Maronite Church, [1] the Chaldean Catholic Church, [2] Syriac Catholic Church [3] ,Syriac Orthdox Church,Assyrian Church of the East and the Syro Malabar Catholic Church

The consensus within biblical scholarship, though not universal, is that the Old Testament of the Peshitta was translated into Syriac from Hebrew, probably in the 2nd century AD, and that the New Testament of the Peshitta was translated from the Greek. [4] This New Testament, originally excluding certain disputed books (2 Peter, 2 John, 3 John, Jude, Revelation), had become a standard by the early 5th century. The five excluded books were added in the Harklean Version (616 AD) of Thomas of Harqel. [5] However, the 1905 United Bible Society Peshitta used new editions prepared by the Irish Syriacist John Gwynn for the missing books.

The name 'Peshitta' is derived from the Syriac mappaqtâ pšîṭtâ (ܡܦܩܬܐ ܦܫܝܛܬܐ), literally meaning 'simple version'. However, it is also possible to translate pšîṭtâ as 'common' (that is, for all people), or 'straight', as well as the usual translation as 'simple'. Syriac is a dialect, or group of dialects, of Eastern Aramaic, originating around Edessa. It is written in the Syriac alphabet, and is transliterated into the Latin script in a number of ways, generating different spellings of the name: Peshitta, Peshittâ, Pshitta, Pšittâ, Pshitto, Fshitto. All of these are acceptable, but 'Peshitta' is the most conventional spelling in English.

Brief history of the Peshitta

The Peshitta had from the 5th century onward a wide circulation in the East, and was accepted and honored by the whole diversity of sects of Syriac Christianity. It had a great missionary influence: the Armenian and Georgian versions, as well as the Arabic and the Persian, owe not a little to the Syriac. The famous Nestorian tablet of Chang'an witnesses to the presence of the Syriac scriptures in the heart of China in the 8th century. The Peshitta was first brought to the West by Moses of Mindin, a noted Syrian ecclesiastic who unsuccessfully sought a patron for the work of printing it in Rome and Venice. However, he was successful in finding such a patron in the Imperial Chancellor of the Holy Roman Empire at Vienna in 1555—Albert Widmanstadt. He undertook the printing of the New Testament, and the emperor bore the cost of the special types which had to be cast for its issue in Syriac. Immanuel Tremellius, the converted Jew whose scholarship was so valuable to the English reformers and divines, made use of it, and in 1569 issued a Syriac New Testament in Hebrew letters. In 1645, the editio princeps of the Old Testament was prepared by Gabriel Sionita for the Paris Polyglot, and in 1657 the whole Peshitta found a place in Walton's London Polyglot . For long the best edition of the Peshitta was that of John Leusden and Karl Schaaf, and it is still quoted under the symbol "Syrschaaf", or "SyrSch".

When the earliest extant New Testament Peshitta text, the Khabouris Codex was found, the news article "US Library gets an Ancient Bible" appeared in the New York Times on March 26, 1955 reporting on the oldest known New Testament Bible written in "the language used by Christ." The article noted that it was taken to the White House where President Eisenhower viewed it. The Codex was said to be insured for "an hour and a half" in the amount of $1,500,000 US dollars. [6] This discovery challenges the long held idea that the Peshitta (Aramaic New Testament Scriptures) were written after the Greek and Hebrew texts, and lending credence to the minority viewpoint held by the Church of the East which itself states to be in possession of the New Testament Scriptures as handed down by the Apostles themselves.

In a detailed examination of Matthew 1–14, Gwilliam found that the Peshitta agrees with the Textus Receptus only 108 times and with Codex Vaticanus 65 times. Meanwhile, in 137 instances it differs from both, usually with the support of the Old Syriac and the Old Latin, and in 31 instances it stands alone. [7]

To this end, and in reference to the originality of the Peshitta, the words of Patriarch Shimun XXI Eshai are summarized as follows:

In the first century CE, Josephus, the Jewish historian, testified that Aramaic was widely spoken and understood accurately by Parthians, Babylonians, the remotest Arabians, and those of his nation beyond Euphrates with Adiabeni. He says:

"I have proposed to myself, for the sake of such as live under the government of the Romans, to translate those books into the Greek tongue, which I formerly composed in the language of our country, and sent to the Upper Barbarians. Joseph, the son of Matthias, by birth a Hebrew, a priest also, and one who at first fought against the Romans myself, and was forced to be present at what was done afterwards, [am the author of this work],"

"I thought it therefore an absurd thing to see the truth falsified in affairs of such great consequence, and to take no notice of it; but to suffer those Greeks and Romans that were not in the wars to be ignorant of these things, and to read either flatteries or fictions, while the Parthians, and the Babylonians, and the remotest Arabians, and those of our nation beyond Euphrates, with the Adiabeni, by my means, knew accurately both whence the war begun, what miseries it brought upon us, and after what manner it ended."

Yigael Yadin, an archeologist working on the Qumran find, also agrees with Josephus' testimony, pointing out that Aramaic was the lingua franca of this time period. [9] Josephus' testimony on Aramaic is also supported by the gospel accounts of the New Testament (specifically in Matthew 4:24-25, Mark 3:7-8, and Luke 6:17), in which people from Galilee, Judaea, Jerusalem, Idumaea, Tyre, Sidon, Syria, Decapolis, and "from beyond Jordan" came to see Jesus for healing and to hear his discourse.

A statement by Eusebius that Hegesippus "made some quotations from the Gospel according to the Hebrews and from the Syriac Gospel," means we should have a reference to a Syriac New Testament as early as 160–180 AD, the time of that Hebrew Christian writer. The translation of the New Testament is careful, faithful and literal, and the simplicity, directness and transparency of the style are admired by all Syriac scholars and have earned it the title of "Queen of the versions." [10]

Critical Edition of the New Testament

The following manuscripts are in the British Archives:

The Bible is a collection of sacred texts or scriptures. Varying parts of the Bible are considered to be a product of divine inspiration and a record of the relationship between God and humans by Christians, Jews, Samaritans, and Rastafari. The Bible appears in the form of an anthology, compiling texts of a variety of forms that are all linked by the belief that they collectively contain the word of God. These texts include theologically-embellished historical accounts, hymns, allegorical erotica, parables, and didactic letters.

Different religious groups include different books in their biblical canons, in varying orders, and sometimes divide or combine books. The Jewish Tanakh contains 24 books divided into three parts: the five books of the Torah ("teaching"); the eight books of the Nevi'im ("prophets"); and the eleven books of Ketuvim ("writings"). It is composed mainly in Biblical Hebrew, and its Septuagint is the main textual source for the Christian Greek Old Testament. 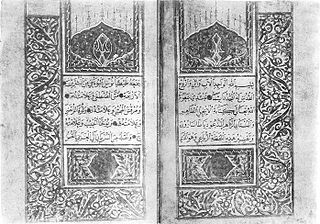 The Diatessaron is the most prominent early gospel harmony, and was created by Tatian, an Assyrian early Christian apologist and ascetic. Tatian sought to combine all the textual material he found in the four gospels—Matthew, Mark, Luke, and John—into a single coherent narrative of Jesus's life and death. However, and in contradistinction to most later gospel harmonists, Tatian appears not to have been motivated by any aspiration to validate the four separate canonical gospel accounts; or to demonstrate that, as they stood, they could each be shown as being without inconsistency or error.

The Greek Old Testament, or Septuagint, is the earliest extant Koine Greek translation of books from the Hebrew Bible, various biblical apocrypha, and deuterocanonical books. The first five books of the Hebrew Bible, known as the Torah or the Pentateuch, were translated in the mid-3rd century BCE; they did not survive as original translation texts, however, except as rare fragments. The remaining books of the Greek Old Testament are presumably translations from 200 BCE to 50 CE.

George M. Lamsa was an Assyrian author. He was born in Mar Bishu in what is now the extreme east of Turkey. A native Aramaic speaker, he translated the Aramaic Peshitta Old and New Testaments into English. He popularized the claim of the Assyrian Church of the East that the New Testament was written in Aramaic and then translated into Greek, contrary to academic consensus.

The New Testament in Aramaic languages exists in a number of versions:

The Holy Bible from Ancient Eastern Manuscripts was published by George M. Lamsa in 1933. It was derived, both Old and New Testaments, from the Syriac Peshitta, the Bible used by the Assyrian Church of the East and other Syriac Christian traditions.

John Wesley Etheridge was an English nonconformist minister and scholar. He was the first person to translate the four gospels from the Syriac Peshitta into English (1846), shortly before the full New Testament was translated by James Murdock (1856). 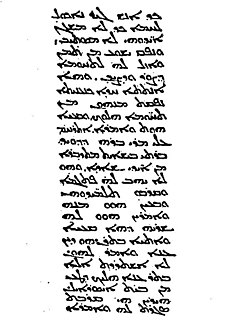 The Curetonian Gospels, designated by the siglum syrcur, are contained in a manuscript of the four gospels of the New Testament in Old Syriac. Together with the Sinaiticus Palimpsest the Curetonian Gospels form the Old Syriac Version, and are known as the Evangelion Dampharshe in the Syriac Orthodox Church.

Sacred Name Bibles are Bible translations that consistently use Hebraic forms of God's personal name, instead of its English language translation, in both the Old and New Testaments. Some Bible versions, such as the Jerusalem Bible, employ the name Yahweh, a transliteration of Hebrew YHWH, in the English text of the Old Testament, where traditional English versions have LORD.

Codex Phillipps 1388, Syriac manuscript of the New Testament, on parchment. It contains the text of the four Gospels. Palaeographically it had been assigned to the 5th/6th centuries. It is one of the oldest manuscripts of Peshitta with some Old Syriac readings.

Philip Edward Pusey (1830-1880), son of the Hebrew scholar and leader of the Anglo-Catholic Oxford Movement, Edward Bouverie Pusey, was an English Aramaicist. He started the work continued by George Gwilliam on making an edition of the Aramaic New Testament of the Peshitta. The utility of the edition is however limited by its reliance on late sources.

The Literal English Version of Scripture (LEV) is a translation of the Bible, based on the World English Bible. Formerly known as the "Shem Qadosh Version" the title was officially changed in November 2016. It is considered a Sacred Name Bible rendering the name of God using the Hebrew characters יהוה, and that of Jesus in Hebrew as ישוע. It was created by a team of volunteers across the United States with additional proofing and editing assistance by individuals in Poland and Taiwan. Footnotes and appendices were written by the General Editor, J. A. Brown.