Peteca (Portuguese pronunciation:  [peˈtɛkɐ] ) is a traditional sport in Brazil, played with a "hand shuttlecock" from indigenous origins and reputed to be as old as the country itself. The same name is given to the shuttlecock-object itself.

The objective of the game is to hit the shuttlecock-like object (the peteca) with your hand over a high net, similar to a volleyball net, causing the object to land inbounded on the opposite court. The peteca can only be hit once while on each side of the net. Doubles and singles, male and/or female matches are played, both for competitive or leisure purposes.

The word peteca is derived from a Tupian word meaning hit. Over time, the word found its way into Brazilian Portuguese language.

Originally, peteca was played at times of celebration with dances and songs. Gradually, this play became more of a sporting activity. The game has been passed down through several generations by the Brazilian ancestors and has developed considerably along the way.

Early petecas were very primitive home-made affairs consisting of stones wrapped in leaves tied inside an ear of corn. A more sophisticated version was described in a Brazilian-English dictionary as "a leather pad with feathers stuck into it."

Pictures of the first petecas are few and far between, but on 30 May 1979, Brazil issued a set of four postage stamps depicting children's toys, to commemorate the International Year of the Child.

When Brazil was present at the 1920 Summer Olympics in Antwerp, Belgium the Brazilian athletes took with them some shuttlecocks for amusement on the ship and during the intervals between games. The game of peteca fascinated athletes from many other countries who wanted learn the rules of the game. The problem was that there were no rules - it was just for pleasure.

Peteca left the streets, the grass and the sand to become a field sport in Belo Horizonte in the 1940s.

It was in Belo Horizonte, the capital city of Minas Gerais state, that the toy shape was transformed to its current format, proper for competitive games. The typical peteca has four white chicken feathers attached to a base and connected to a bottom made with several thin layers of rubber. It was also in Belo Horizonte that the rules of the game were first written, as well as the first courts were built and the practice gained competitive sense with internal championships that were held in various social clubs of the city.

In 1973 the Peteca Federation of Minas Gerais (FEMP) was founded, confirming the pioneering spirit of a sport born and developed among the Brazilian people. From Belo Horizonte, the practice has spread to other Brazilian states, and from there to other countries, like France, that adopted the game as it is played in Brazil.

Peteca is now one of Brazil's fastest growing sports closely behind football and volleyball.[ citation needed ] Another version of the game, called Indiaca, and closely based on peteca has developed in Germany, first appearing in 1936.

A peteca match is played to the best of the three games, singles or doubles. The first player (or the first pair) who scores twelve points wins the set. One game can last only a maximum of twenty minutes. If neither of the two sides have reached the required score, then the win is given to the team with the most points.

The peteca must be struck with one hand only and must pass above the net to the oppositions side in order for them to return it. The server remains the same one until the service changes side. A point can only be won by the serving team. The player with the service has thirty seconds to score the point. If this is not achieved then the service is given to the opposing player/team.

There are a number of recognised faults which can occur.

Competitive court games have been played in Brazil since the early 1930s. It was only in 1973 that the first rules were written.

Currently,[ when? ] in Brazil, there's a Confederação Brasileira de Peteca, [1] still incipient, being formed around the preexistent Federação Mineira de Peteca, [2] from the state of Minas Gerais.

A version of peteca, indiaca, was developed by Karlhans Krohn  [ de ] in Germany in 1936 and is very popular. However, France was one of the first European countries to embrace peteca proper. The Federation Française de Peteca (FFP) [3] is the national organ for France and was created in February 1997 by Jean-François Impinna, a French former international rugby player, and counts thousands of French peteca players.

May 2006 would see the first International Peteca Tournament being hosted by the FFP in Sannois, Paris. Teams from Brazil, France and the United Kingdom were to compete.[ citation needed ]

A shuttlecock is a high-drag projectile used in the sport of badminton. It has an open conical shape formed by feathers or plastic embedded into a rounded cork base. The shuttlecock's shape makes it extremely aerodynamically stable. Regardless of initial orientation, it will turn to fly cork first, and remain in the cork-first orientation.

Cruzeiro Esporte Clube, known simply as Cruzeiro, is a Brazilian sports club based in Belo Horizonte, Minas Gerais. Although they compete in a number of different sports, Cruzeiro is mostly known for its association football team. It plays in the Campeonato Brasileiro Série B, the second tier of the Brazilian football league system, as well as in the Campeonato Mineiro, the state of Minas Gerais's premier state league.

Contagem is a city in the center of the state of Minas Gerais, in Brazil. It is only 21 kilometres from the capital, Belo Horizonte, and forms part of a metropolitan area with a population of 4.8 million. 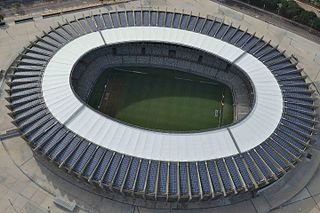 Mineirão, officially Estádio Governador Magalhães Pinto is the largest football stadium in the state of Minas Gerais. It was established in 1965, and it is located in Belo Horizonte.

Riley Salmon is a volleyball player from the United States. He graduated from Clear Creek High School in League City, Texas, and played two years of varsity volleyball at Pierce College from 1994-96 before joining the men's national team in May 2001 as an outside hitter. He competed at the 2004 Olympics and the 2008 Olympics. At the 2008 Olympics, he helped Team USA win the gold medal. 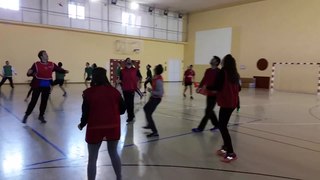 Indiaca is a form of the Brazilian game peteca popular in Europe. It is played on court across a net with similar rules to volleyball but instead of a ball, a large shuttlecock, sometimes also called an indiaca, or featherball is used; this consists of four goose feathers attached to a heavier base, and it is controlled using the hands. In this way, indiaca differs from jiànzi, a very similar game originating in Vietnam and China, where the shuttlecock is controlled with the feet. Indiaca can be played by two individual players facing each other, or by small teams.

Minas Tênis Clube is a social, recreational and sports club from Belo Horizonte, Brazil. By 2013, it has more than 73,000 members. Its patrimony comprises two urban units, the Minas I and Minas II, and two country units, Minas Country and Minas Tênis Náutico Clube. It also has its own indoor arena, named Juscelino Kubitschek Arena, which is a part of the Minas I complex.

The Torneio dos Campeões - the "Tournament of Champions" - was an interclub tournament for association football clubs from Brazil, organised in 1967 by the football association of the state of Minas Gerais, the Federação Mineira de Futebol. Participants were the 1966 state champions of

The 2014 Campeonato Mineiro was the 100th edition of the state championship of Minas Gerais organized by the FMF. The competition began on 26 January and ended on 13 April 2014.