Last updated February 11, 2021
Not to be confused with Peter Franzen.

Franzén was born in Keminmaa, north Finland. Franzén has described his childhood as difficult due to his violent and alcoholic stepfather. Later, Franzén's relationship to his abusive stepfather was a major focal point in his semi-autobiographical novel, Above Dark Waters. [1] He met his actress wife Irina Björklund while studying in Theatre Academy of Finland. In 1999 the couple moved to Los Angeles, where they lived until 2013, after which they moved to Roquevaire, France. [2] They have a son, born in September 2007.

As an actor, Franzén has appeared in over 50 films and TV series. For his role in Dog Nail Clipper , Franzén was awarded a Jussi Award for Best Actor [3] as well as earning praise from film critic Jay Weissberg from Variety magazine who called the actor "one of the most talented and versatile thesps in Finland". [4]

In his career he has appeared in Finnish, Estonian, German, English, Swedish, and Hungarian speaking roles. In 2015, Franzén was cast as King Harald Finehair from the fourth season of Vikings . [5] Franzén has also been cast in Amazon Prime Video's upcoming The Wheel of Time TV series. [6]

In 2013 Franzén directed the film "Above Dark Waters", based on novel he had written in 2010. In 2020, he directed and starred in a pilot for a viking-themed tv-series called "Age of Vikings" which was shot in Old Swedish.

In 2013 Franzén was awarded the Pro Finlandia Medal of the Order of the Lion of Finland .

Yleisradio Oy (Finnish), literally General Radio or General Broadcast; Swedish: Rundradion Ab; English: Finnish Broadcasting Company; abbr. Yle, is Finland's national public broadcasting company, founded in 1926. It is a joint-stock company which is 99.98% owned by the Finnish state, and employs around 3,200 people in Finland. Yle shares many of its organizational characteristics with its UK counterpart, the BBC, on which it was largely modelled.

Sauli Väinämö Niinistö is a Finnish politician serving as the 12th and current president of Finland since 2012.

Teräsbetoni is a Finnish power metal band. Their first album, Metallitotuus was released in 2005 and has so far sold more than 32,000 copies. Teräsbetoni has been strongly influenced by bands such as Manowar. The direct translation of the band's name is steel concrete, Finnish for reinforced concrete.

Veikko Huovinen was a Finnish novelist and forester. As a novelist, his writing was known for its realism, pacifism, sharp intellect, and peculiar humor. He wrote 37 books. One of his books, the 1980 novel Dog Nail Clipper was adapted into a critically well-received 2004 film of the same name. 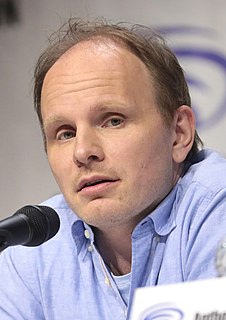 Thomas "Dome" Karukoski is a Finnish film director. He is considered to be one of Finland's most successful film directors, having won over 30 festival awards and having directed six feature films that became blockbusters in his home country and also received international recognition.

Aku Louhimies is a Finnish film director and screenwriter. He has directed feature films, documentary films, commercials and music videos. His international breakthrough was the 2016 serial drama Rebellion. He has directed and produced Unknown Soldier which is the most expensive feature film ever made in Finland.

Paula Julia Vesala is a Finnish singer-songwriter, actress, and playwright. She was one of two singers and main lyricist in the pop rock duo PMMP along with Mira Luoti. Her solo career began in 2015 under the stage name "Vesala". She has composed songs for other well-known Finnish artists such as Vesa-Matti Loiri, Jenni Vartiainen, and Antti Tuisku.

Ville Juhana Haapasalo is a Finnish stage and film actor who has worked in Finland and Russia. His acting career started in 1995, after he finished his studies in St. Petersburg. In 2003, he was honored with the State Prize of the Russian Federation for his role of Veikko in the film The Cuckoo directed by Aleksandr Rogozhkin.

Ahtium was a Finnish mining company that operated the Talvivaara nickel mine from the company's establishment in 2004 until the mining business was sold to the state-owned Terrafame in 2015. 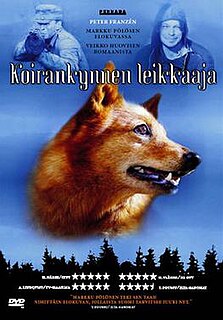 Dog Nail Clipper is a 2004 Finnish film directed by Markku Pölönen and starring Peter Franzén and Taisto Reimaluoto. The film is an adaptation of Finnish author Veikko Huovinen's 1980 novel of the same name.

Markku Tapani Pölönen is a Finnish film director, screenwriter, editor and owner of film production company Suomen Filmiteollisuus. Pölönen's best known work is the 2004 film Dog Nail Clipper — directed and written by Pölönen — which was honoured with five awards at the 2005 Jussi Awards including Best Direction and Best Script and which film critic Jay Weissberg from Variety called Pölönen's "most mature work to date". Pölönen has been awarded numerous additional Jussi awards, including best picture and best screenplay for Onnen Maa (1994); best picture and best director for Kivenpyörittäjän kylä (1995); and best picture, best director, and best screenplay for A Summer by the River (1999), plus many more Jussi awards for actors in Pölönen's films. Pölönen has further been nominated for at least two other Jussis that he did not win.

The Police University College is a university of applied sciences in Tampere, Finland providing police academy training and research under the Ministry of the Interior for the Police of Finland and other Finnish law enforcement units.

Taavi Vartia is a Finnish Film director, script writer and writer. Taavi Vartia has since 1990 planned, directed and produced programmes for all of Finland's national television channels: YLE TV1, YLE TV2, MTV3 and Nelonen, across a range of genres including drama, entertainment, music, profiles and documentaries. He has been involved in the production of over 1100 episodes. Vartia has also written and directed several company- and image videos for the Finnish companies. In recent years he has received recognition as a writer of young adult dramas and as a documentary film maker. Vartia has published four novels. Taavi Vartia founded Taaborin kesäteatteri/ Taabori Summer Theater in Nurmijärvi 2009 and started to run the movie theatre Kino Juha 2019. Vartia is currently known to be the only Finnish film director to have his own cinema.

Hellsinki is a 2009 Finnish film directed by Aleksi Mäkelä. The film is based on the novel Rööperi – rikoksen vuodet 1955–2005 by Harri Nykänen and Tom Sjöberg. Hellsinki follows the journey of two criminals, Tomppa and Krisu, in Punavuori, a neighbourhood in Helsinki, from the mid-1960s to the late 1970s. 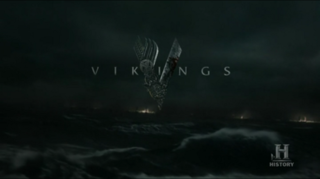 Vikings is a historical fantasy drama television series created and written by Michael Hirst for the History channel. Filmed in Ireland, it premiered on March 3, 2013, in Canada. The series concluded on December 30, 2020, when the second half of the sixth season was released in its entirety on Prime Video in Ireland, ahead of its broadcast on History in Canada from January 1 to March 3, 2021. A sequel series, titled Vikings: Valhalla, is in development for Netflix. 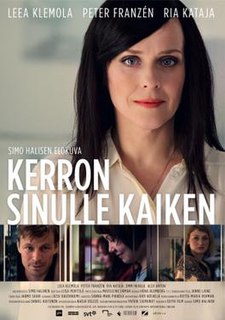 Open Up to Me is a 2013 Finnish film directed and written by Simo Halinen. It tells a story of Maarit, a woman who has just gone through a sex reassignment surgery. She wants to rebuild her relationship to her teenage daughter and is also looking for a man to share her life with. The film was nominated for the 2013 Nordic Council Film Prize.

Bordertown is a Finnish crime drama and Nordic noir television series created by Miikko Oikkonen and starring Ville Virtanen as Detective Inspector Kari Sorjonen. It premiered in Finland on 16 October 2016 on Yle TV1. Season 2 premiered on 7 October 2018, and season 3 premiered in December 2019. In addition to its home country, the series has received praise internationally; fans of the series include American author Stephen King, among others.

Erik Pöysti is a Finnish film director and actor. He is the son of Finnish actors Lasse Pöysti and Birgitta Ulfsson.