Hurford was born in Minehead, [1] Somerset, to Gladys Hurford (née James) and Hubert Hurford, a solicitor. [2] He was educated at Blundell's School. [3] He later studied both music and law at Jesus College, Cambridge, graduating with dual degrees, subsequently obtaining a reputation for both musical scholarship and organ playing. [4] Hurford subsequently studied in Paris under the French organist André Marchal, exploring music of the Baroque period. [4]

He made interpretations of Bach, and recorded the complete Bach organ works for Decca and BBC Radio 3. His expertise also encompassed recordings of the Romantic literature for organ, performances notable for attention to stylistic detail. His playing style is noted for clean articulation, beauty of expression, and a sense of proper tempo.[ citation needed ]

Hurford was appointed organist of Holy Trinity Church, Leamington Spa from 1956 to 1957. For the same period, he was Music Master at Bablake School, Coventry, and Musical Director of the Royal Leamington Spa Bach Choir. He was then organist and choirmaster of St Albans Cathedral Choir in 1958, serving in this post for twenty years. [5] He conceived the idea of an organ competition in 1963, partly to celebrate the new Harrison & Harrison organ designed by Ralph Downes and himself. [6] This venture was successful mainly because of the young Hurford's rapidly growing stature in Britain and overseas as a result of his refreshing notions of the "authentic performance style". This has grown into the St Albans International Organ Festival, a world-renowned festival of organ music with competitions whose past winners include many of the great names in modern organ music including Dame Gillian Weir, David Sanger, Thomas Trotter and Kevin Bowyer. [4]

Hurford travelled extensively for both his performance and recording career. He was artist in residence at Cincinnati, Ohio University (1967–68), Toronto, Canada (1977), and consultant for the Sydney Opera House organ. He held a number of Honorary Doctorates, was appointed an Honorary Fellow of Jesus College, Cambridge in 2006, [7] was a past President of the Royal College of Organists and received its Medal in 2013, [8] and has been appointed an Officer of the Order of the British Empire (OBE). He wrote a book: Making Music on the Organ (1998, Oxford University Press, ISBN   0-19-816207-3) and published a great deal of choral music for the Anglican liturgy, much of it issued by leading publishers such as Novello and Oxford University Press. His Litany to the Holy Spirit, to a famous text by Robert Herrick, is sung worldwide.

Hurford suffered a minor stroke in 1997, but recovered enough to resume his performing career seven months later. In 2008, he was diagnosed with Alzheimer's Disease, and subsequently retired formally from performing in 2009. [9]

Hurford died on 3 March 2019, aged 88. [10] His marriage to Patricia Matthews lasted from 1955 until her death in 2017, and produced 3 children. His survivors include his daughter Heather, his two sons Michael and Richard, and nine grandchildren. [11]

Hurford made over 50 recordings, as a solo artist and with multiple other musicians. As well as recording Bach's complete works for the organ, he recorded the organ concertos, op. 7 of Handel with the Concertgebouw Chamber Orchestra.

Sir Stephen John Cleobury was an English organist and music director. He worked with the Choir of King's College, Cambridge, where he served as music director from 1982 to 2019, and with the BBC Singers. 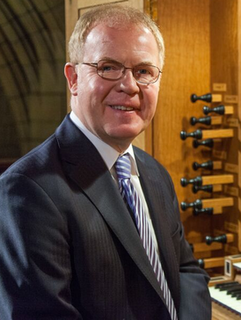 John Gavin Scott, LVO was an English organist and choirmaster who reached the highest levels of his profession on both sides of the Atlantic. He directed the Choir of St Paul's Cathedral in London from 1990 to 2004. He then directed the Choir of Men and Boys of St Thomas Church on Fifth Avenue in New York City until his death at age 59. Whilst training countless young musicians, he maintained an active career as an international concert performer and recording artist, and was acclaimed as "the premier English organist of his generation".

Ralph William Downes CBE KSG was an English organist, organ designer, teacher and music director and was Professor of Organ in the Royal College of Music.

Barry Michael Rose OBE FRAM FRSCM HonFRCO is a choir trainer and organist. He is best known for founding the choir and the pattern of daily sung Worship at the new Guildford Cathedral in 1961, as well as directing the music at the 1981 wedding of Charles, Prince of Wales and Diana, Princess of Wales at St Paul's Cathedral in London.

David John Sanger was a concert organist, professor and president of the Royal College of Organists. 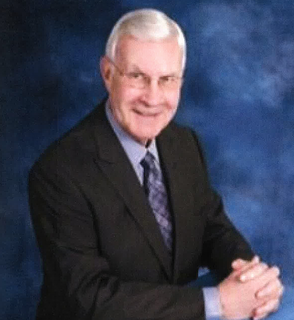 Frederick L. Swann is an American church and concert organist, choral conductor, composer, recording artist, and former president of the American Guild of Organists. He is the former Director of Music and Organist at New York City's Riverside Church and Organist Emeritus of the Crystal Cathedral and the First Congregational Church of Los Angeles. Playing the Crystal Cathedral organ on the weekly Hour of Power television program, he was reportedly seen by an audience of 20 million viewers in 165 countries. Critics such as Tim Smith have called Swann "one of the country's most distinguished organists". Other critics have praised his playing as "brilliant" and "masterly", having a "commanding sense of pace and color". The New York Times said his performance at a Riverside Church recital in 2006, "demonstrated that organists are complete athletes, needing both lightning-fast fingers and the fleet footwork of a dancer".

Sydney Watson was an English church musician who was the organist of Christ Church Cathedral, Oxford and conductor of the Oxford Bach Choir from 1955 to 1970.

John Butt is an orchestral and choral conductor, organist, harpsichordist and scholar. He is the Gardiner Chair of Music at the University of Glasgow and is music director of the Dunedin Consort with whom he has made award-winning recordings in historically informed performance. Many of them feature reconstructions of a specific historical performance, such as Bach's first Christmas services on Christmas Day in Leipzig. 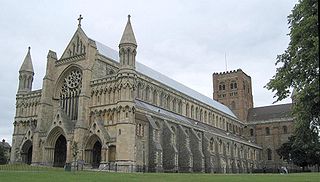 St Albans Cathedral Choir is an English Cathedral Choir based in St Albans, Hertfordshire, England. It is made up of around 20 boy choristers aged 7–14 and 12 adult lay clerks. In 2003 it appeared in the coronation scene of the film Johnny English.

Peter Dyke is an English organist. A Fellow of the Royal College of Organists, he has recorded several albums either as a soloist or accompanist, including three for Regent Records and one for Priory Records.

St Albans Bach Choir is an amateur choir based in the English cathedral city of St Albans. Since its founding in 1924 it has performed a wide range of choral music including but by no means limited to the great Bach masterpieces. It strives for the highest possible standards of music making, employing soloists of the highest calibre and professional orchestras. Performances are normally held in St Albans Cathedral. Currently, the Musical Director is Andrew Lucas, Master of the Music at the Cathedral.