listen ); 27 October 1937 – 23 February 2016) was a German television presenter, voice actor and author of children's books who has become especially well known as leading actor in the weekly children's television show Löwenzahn , which he hosted from 1979 up until 2006. During its first year the show was called Pusteblume. [2] He also hosted the show Mittendrin (1987–95), narrated the film Gordos Reise ans Ende der Welt (2007) [3] and provided the German voice for the computer game character Gary Gadget.

Lustig was not a trained actor or host. He originally qualified as a broadcast engineer and an electronics engineer. Working for American Forces Network as a radio engineer in 1963, he was responsible for the recording of US President John F. Kennedy's speech Ich bin ein Berliner held in Berlin. [4]

Starting in 1970, he began appearing in front of the camera. His first appearance was a short sketch in the popular German children's show Die Sendung mit der Mau s, where a raw egg was dropped onto his bald head, with him making a funny commentary about it. [5] He went on to have small roles in Die Sendung mit der Maus and the German segments of Sesame Street . His popularity increased, which led to him starring in his own show Löwenzahn from 1979 onwards, where he explained various phenomena of science and nature to children.

He often ended an episode with a proposal to turn off the TV now with his famous hand turning gesture, as if he was turning off an old TV. His show persona always wore characteristic blue dungarees and lived in a wooden building site cabin in fictitious Bärstadt ("Beartown").

In 2006 he retired from his role as the host of the show mainly due to health issues - he was diagnosed with lung cancer in 1984, but managed to overcome the disease after ten years, but had one of his lungs removed in the process, which made it difficult for him to breathe and forced him to use a walking stick. [5]

Since the 1980s Lustig was a follower of Osho.

Lustig's books include the science comic Wie funktioniert ein Auto? ("How does a car work?") (1983) on the working principles of automobiles, the two-volume handicraft book Peter Lustigs Bastelbuch ("Peter Lustig's Book of Handicraft") (1985 and 1987), and the children's cookbook Kochbuch für kleine Feinschmecker ("Cookbook for little gourmets") (1992). He also authored Vertonen: Der Ton zu den Bildern ("Set to music: The Soundtrack to the Images") (1987), a book on post-recording of soundtracks for films and slideshows, and Lieber Momme: Wunderliche Briefe ("Beloved Momme: Strange Letters") (1989), a book made up of letters he wrote to his young son from hospital, where Peter Lustig stayed many times throughout the 1980s due to lung cancer surgery.

Lustig's second wife, British-Austrian children's author and fellow follower of Osho Elfie Donnelly, published the book Peters Flucht ("Peter's escape") (1986) about the 8-year-old Lustig's escape with his family from the city of Breslau (modern-day Wrocław) in 1945.

He died on 23 February 2016 at the age of 78 at his home in Bohmstedt near Husum surrounded by his family. [6] [7] He is survived by his four children and nine grandchildren.

In addition to winning numerous prizes, including two of the renowned Adolf-Grimme-Preis for Löwenzahn, Lustig was granted the Order of Merit of the Federal Republic of Germany for his effort for education in 2004. It was handed to him by then-German head of state Horst Köhler. [9] [5]

Walter Moers is a German comic creator and author.

Die Sendung mit der Maus is a children's series on German television that has been called "the school of the nation". The show first aired on 7 March 1971. Originally called Lach- und Sachgeschichten für Fernsehanfänger, it was controversial because German law prohibited television for children under six years of age. The program was initially condemned by teachers and childcare professionals as bad for children's development, but is now hailed for its ability to convey information to children. The show has received over 75 awards. The first doctoral dissertation on the program was written in 1991. On 7 March 1999 the program's Internet site was launched and received 2,400 e-mails and 4 million hits on the first day.

Löwenzahn (Dandelion) is a children's television series produced and aired by German public broadcaster ZDF on German television. Originally conceived and hosted by Peter Lustig, the first episode aired on January 7, 1979, then titled Pusteblume. The first episode of the retitled series Löwenzahn aired on March 24, 1981. After Lustig's health-related retirement, the show was taken over by actor Guido Hammesfahr in October 2006. 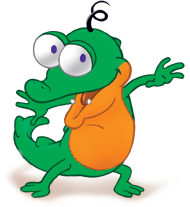 Schnappi das kleine Krokodil is a German children's cartoon character from the show Die Sendung mit der Maus. The cartoon's introductory song, "Schnappi, das kleine Krokodil," became an Internet hit before it reached #1 on the German Singles chart in January 2005 and other European countries as well, topping the singles charts in Austria, Belgium, the Netherlands, Norway, Sweden and Switzerland.

Bunte is a German-language people magazine published by Hubert Burda Media. The first edition was published in 1948 under the name Das Ufer. Under the leadership of Hubert Burda, Bunte developed into a modern popular magazine. Today, Bunte has one of the highest circulations of all German publications and is one of the most popular media brands in the Group. After Patricia Riekel stepped down, Robert Pölzer took over as Editor-in-Chief in July 2016.

Paul Maar is one of the most important modern German writers for children and young people. He is a novelist, playwright, translator and illustrator.

Herr von Ribbeck auf Ribbeck im Havelland is a popular literary ballad written by the German poet and novelist Theodor Fontane in 1889. Up to today, the poem is published in German anthologies and learned in schools.

Haydar Zorlu is a Turkish-German actor.

Armin Maiwald, born 23 January 1940 in Cologne, is a German author, television director and producer. Maiwald is one of the founders of the award-winning German children's television program, Die Sendung mit der Maus. Often just called Die Maus, the program has been on the air since March 1971 and is one of the most successful children's television programs ever produced. Maiwald has won over 50 awards for his work.

Christoph Biemann is a German writer, director and producer and one of the presenters of the award-winning children's television show, Die Sendung mit der Maus. Also known as Die Maus, it has been on the air since 1971; Biemann joined the show in 1972. He has his own production company, Delta TV, and has won numerous awards, including the Order of Merit of the Federal Republic of Germany. Though he produces many film shorts for The Mouse, he doesn't speak in or narrate any of them. He is known by a trademark green sweatshirt, which he wears on television and in public appearances.

Ralf Schmitz is a German comedian and actor.

Markus Ziereis is a German professional footballer who plays as a forward for SpVgg Bayreuth.

Bernhard Hoëcker is a German comedian, actor and television presenter.

Maximilian Simonischek is an Austrian–Swiss actor. He is the son of the actors Peter Simonischek and Charlotte Schwab.

Iris Radisch is a German literature-journalist. Since 1990 she has written for the mass-circulation weekly newspaper, Die Zeit. More recently she has come to wider prominence through her television work.

Astrid Freudenstein is a German civil servant and politician of the Christian Social Union in Bavaria (CSU).