Last updated May 21, 2020
American photojournalist and a pioneer underwater archaeologist

Edgerton Alvord Throckmorton (July 30, 1928 – June 5, 1990), known as Peter Throckmorton, was an American photojournalist and a pioneer underwater archaeologist, frequently described as the Father of Underwater Archaeology. Throckmorton was a founding member of the Sea Research Society and served on its Board of Advisors until his death in 1990. He was also a trustee for NUMA and was an instructor at Nova Southeastern University.

Peter also discovered the 1877 iron bark ELISSA lying off the shipbreaker's yard in Perama, Greece. From her lines and fittings and his experience sailing aboard a 'Downeaster' as a teenager, he knew ELISSA for what she was- one of the last square-rig ships still in the trade, even if greatly modified, of smuggling cigarettes. His efforts, combined with those of the San Francisco Maritime Museum's founder Karl Kortum, saved the ship until she could find a safe haven with the Galveston Historical Foundation. She is now completely restored and considered one of the finest nineteenth-century tall ships still sailing. 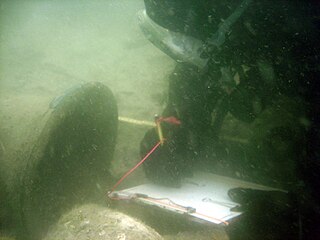 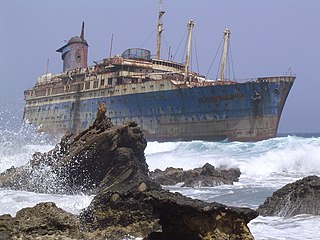 A shipwreck is the remains of a ship that has wrecked, which are found either beached on land or sunken to the bottom of a body of water. Shipwrecking may be deliberate or accidental. In January 1999, Angela Croome estimated that there have been about three million shipwrecks worldwide.

Dokos is a small Greek island of the Argo-Saronic Gulf, adjacent to Hydra, and separated from the Peloponnese by a narrow strait called, on some maps, "the Hydra Gulf." It is part of the municipality of Ýdra (Hydra) in Islands regional unit and reported a population of 18 persons at the 2011 census. The island is populated only by some Orthodox monks and perennial sheep herders. The island is rocky, reaching a height of 308 metres. During the ancient times it was called Aperopia (Ἀπεροπία). 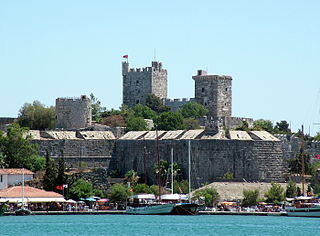 The Kyrenia ship is the wreck of a 4th-century BC Greek merchant ship. It was discovered by Greek-Cypriot diving instructor Andreas Cariolou in November 1965 during a storm. Having lost the exact position Cariolou carried out more than 200 dives until he re-discovered the wreck in 1967 with the help of James Husband close to Kyrenia in Cyprus. Michael Katzev, a graduate student at the University of Pennsylvania Museum of Archaeology and Anthropology, directed a salvage expedition from 1967-69. Preservation of the ship's timbers continued during the winter of 1970. Katzev later was a co-founder of the Institute of Nautical Archaeology. The find was extensively covered in a documentary by the BBC. The ship was considered to be very well preserved with approximately 75% of it in good condition. It found a new home at the Ancient Shipwreck Museum in Kyrenia Castle, where it remains on exhibit. 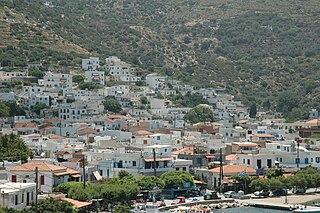 Fournoi Korseon, more commonly simply Fournoi, anciently known as Corsiae or Korsiai (Ancient Greek: Κορσίαι, Corseae or Korseai, and Corsia or Korsia, form a complex or archipelago of small Greek islands that lie between Ikaria, Samos and Patmos in Ikaria regional unit, North Aegean region. The two largest islands of the complex, the main isle of Fournoi 31 square kilometres and the isle of Thymaina 10 square kilometres, are inhabited, as is Agios Minas Island 2.3 square kilometres to the east. The municipality has an area of 45.247 km2. On the main isle Fournoi is the largest settlement and then Chrysomilia in the north the second largest. Fournoi proper is the main ferry harbour, with ferries also landing on Thymaina.

Treasure hunting is the physical search for treasure. For example, treasure hunters try to find sunken shipwrecks and retrieve artifacts with market value. This industry is generally fueled by the market for antiquities. The practice of treasure-hunting can be controversial, as locations such as sunken wrecks or cultural sites may be protected by national or international law concerned with property ownership, marine salvage, sovereign or state vessels, commercial diving regulations, protection of cultural heritage and trade controls.

The Antikythera wreck is a Roman-era shipwreck dating from the second quarter of the first century BC.

The archaeology of shipwrecks is the field of Archaeology specialized most commonly in the study and exploration of shipwrecks. Its techniques combine those of archaeology with those of diving to become Underwater archaeology. However, shipwrecks are discovered on what have become terrestrial sites.

Levitha, known in classical antiquity as Lebinthus or Lebinthos is a small Greek island located in the east of the Aegean Sea, between Kinaros and Kalymnos, part of the Dodecanese islands. It is part of the municipality of Leros. The island is mentioned in two of Ovid's works Ars Amatoria and the Metamorphoses in connection with the saga of Daedalus and Icarus. While escaping from Crete, Daedalus and Icarus flew over Lebinthus. Besides Ovid, the island is noted by the ancient authors Pliny the Elder, Pomponius Mela, Strabo, and Stephanus of Byzantium.

Mensun Bound is a British maritime archaeologist born in Port Stanley, Falkland Islands. He is best known for directing the excavation of the Etruscan 6th-century BC shipwreck off Giglio Island, Italy, the oldest known shipwreck of the Archaic era, and the Hoi An Cargo which revolutionized our understanding of Ming-Vietnamese porcelain from Vietnam's art-historical Golden Age.

Yassi Ada is an island off the coast of Bodrum, Turkey. This area of the Mediterranean Sea is prone to strong winds, making a safe journey around the island difficult. The island could be called a ships' graveyard, on account of the number of wrecked ships off its southeastern tip. Three wreck sites have been excavated under the direction of George Bass of Texas A&M University. The first to be studied using archaeological techniques was a 4th-century Byzantine wreck, the second a 7th-century Byzantine wreck, and the third a 16th-century Ottoman wreck. Bass received funding for a summer excavation at the site from the University Museum of the University of Pennsylvania and the National Geographic Society.

In 1998, an underwater survey conducted off the coast of Israel by the Israeli Antiquities Authority (IAA), discovered the wreckage of a Hellenistic or Early Roman ship. The ship is believed to have sunk sometime in the 1st or 2nd century BC. The wreck itself is located approximately 100 m off the coast of Ashkelon, Israel at a depth of around 3–4 m in the Mediterranean Sea. The city of Ashkelon was once a bustling trade port however multiple ancient reports claim that Ashkelon was a poor site for a port, citing the frequent storms and lack of a safe harbor.

The Classical Shipwreck at Alonnisos is a shipwreck of the Classical Greek period that sunk near the islet Peristera at a depth of 30 m. Its cargo of 3000-4000 amphoras made it the largest transport ship yet known of its period when excavation began in 1992, and it carried wine from Mende and Skopelos. In addition to amphoras, the ship transported many valuable items including black-glazed cups, plates and bronze tableware.