Last updated May 01, 2019
For other uses, see Whitbread (disambiguation).

He was born in Norfolk, England and educated at Gresham's School, Holt, Norfolk. 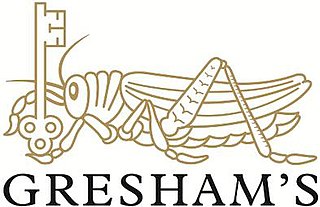 He had a long career in the theatre, including several seasons with the New Shakespeare Company. In his later years he devised and performed one-man shows. [1]

Beyond acting, he worked as a director, playwright and screenwriter. He concentrated mostly on writing for the theatre, and in 1974 his drama Mr Axelford’s Angel won the Emmy Award for Best Television Play. He also wrote scripts for the television soap opera Emmerdale Farm , and all the episodes of Southern Television children's series The Flockton Flyer .

He died after a road accident near his home at Briningham, near Melton Constable, Norfolk. [1]

Briningham is a village and a civil parish in the English county of Norfolk. The village is 9.9 miles east north east of the town of Fakenham, 13.3 miles west south west of Cromer, 22.3 miles north north west of the city of Norwich, and 124 miles north north east of London. The nearest railway station is at Sheringham for the Bittern Line which runs between Sheringham, Cromer and Norwich. There is an abandoned railway line which is considered as a footpath, it runs parallel with an old track "the lane" that leads up to "belle vue tower". The nearest airport is Norwich International Airport. The civil parish had in 2001 census a population of 122, increasing to 130 at the 2011 census. For the purposes of local government, the parish falls within the district of North Norfolk.

Melton Constable is a village and civil parish in the English county of Norfolk. It covers an area of 6.96 km2 (2.69 sq mi) and had a population of 518 in 225 households at the 2001 census. The population had increased to 618 at the 2011 Census. For the purposes of local government, it falls within the district of North Norfolk. The village sits on fairly high ground south-west of Holt.

Sir Peter Alexander Ustinov,, was a British actor, voice actor, writer, dramatist, filmmaker, theatre and opera director, stage designer, screenwriter, comedian, humourist, newspaper and magazine columnist, radio broadcaster and television presenter. He was a fixture on television talk shows and lecture circuits for much of his career. An intellectual and diplomat, he held various academic posts and served as a Goodwill Ambassador for UNICEF and President of the World Federalist Movement.

Peter Jeffrey was an English character actor, starting his performing career on stage, he would later have many roles in television and film.

Gillian Louise Kearney is an English actress best known for her early role as Debbie McGrath in Channel 4's Liverpool-based soap opera Brookside and the spin-off mini-series Damon and Debbie, and for playing Jessica Harrison in the long-running BBC television medical drama series Casualty, as well as Emma Barton in the ITV Yorkshire-based soap opera Emmerdale. The role of Emma Barton gained her a lot of recognition due to her being involved in Emmerdale’s most high profile storylines during her three year stint.

Christopher John Chittell is an English actor, best known for his role as Eric Pollard in ITV's Emmerdale, a part that he has played since 1986. He is the longest serving character having played Pollard for 32 years.

Duncan Preston is an English actor. He is known for his appearances in television productions written by Victoria Wood, including his roles of Clifford in the soap opera parody sketches Acorn Antiques, and Stan in the sitcom Dinnerladies (1998–2000). He reprised his role of Clifford in Acorn Antiques: The Musical! in 2005. His other television roles include DS Todd in the soap opera EastEnders (1987), Jonathan Haslam in the sitcom Surgical Spirit (1989–95); playing Kevin's dad in Harry Enfield and Chums (1994); and Douglas Potts in the soap opera Emmerdale.

Paul Fox is a Cornish actor, known for portraying Mark Redman in Coronation Street and Will Cairns in Emmerdale and Dr Jeff Goodwin in The Royal.

Tom Lister is an English actor who is best known for his roles as Carl King in Emmerdale from 2004 till 2012 and as Harry Wainwright in Heartbeat and also as Rob Ingram in The Bill.

Ronald Edmund Magill was an English actor. He is best remembered for playing Amos Brearly in the British soap opera Emmerdale Farm from 1972 to 1991, and appeared again in this role in 1994 and 1995.

Richard Moore is an English actor known for playing Jarvis Skelton on ITV's Emmerdale from 2002–05.

Richard Grieve is an actor, currently living in England. He was born in Hong Kong. He has worked extensively in film, television, theatre and musical theatre, but is perhaps best known for his roles in the British soap Emmerdale, and two Australian television series, Neighbours and Home and Away.

Arthur Pentelow was an English actor who was best known for playing Henry Wilks in Emmerdale Farm from 1972–91.

Rik Makarem is an English actor most famous for playing Nikhil Sharma in Emmerdale.