Lyubomir Eftimov Ganev, a.k.a. Lyubo Ganev or Lubo, is a Bulgarian former volleyball player. He was born in Rousse, where he started his career. He played with CSKA for seven years and was five times a champion with the team. From 1991 to 1997, Ganev played for Italian teams, before finishing his career at Greek side Aris in 1998. He participated in Bulgaria's national team from 1985 until 1998. He is 210 cm tall. He competed at the 1988 Summer Olympics and 1996 Summer Olympics. He issued a book in 2018.

Petko Kiryakov Karakirkov Петко Кирков Каракирков, better known as Captain Petko Voyvoda was a 19th-century Bulgarian hajduk leader and freedom fighter who dedicated his life to the liberation of Bulgaria.

Bogdan Ganev Dochev was a Bulgarian football referee. He is known for having refereed two matches in the FIFA World Cup, Italy - Cameroon 1-1 in 1982 and Paraguay - Belgium 2-2 in 1986. Dochev was a linesman in the famous Brazil versus Italy match in 1982 and in the game between England and Argentina in 1986 in which the Hand of God and Goal of the Century were scored by Diego Maradona.

Petko is a South Slavic (Петко) masculine given name and East Slavic (Петько) surname. It may refer to:

Veselin Ganev is a Bulgarian footballer who plays as a goalkeeper for Vihren Sandanski.

Petko Vasilev Vasilev is a Bulgarian football player who played for Botev Plovdiv in the Bulgarian A PFG in the 2009–10 season, before that club suffered administrative relegation.

Petko Petkov was a Bulgarian footballer who played as a forward, most notably for Beroe Stara Zagora. He is the club's record goalscorer in the top league with 144 goals in 260 matches. 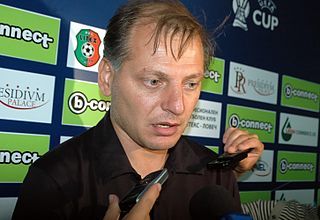 Petko Tsvetanov Petkov is a Bulgarian football manager and former player. He played as forward.

Mihail Petrov Ganev is a freestyle wrestler from Bulgaria who won the world title in the 84 kg division in 2010. He was eliminated in the second bout at the 2016 Olympics.

Captain Petko Voivode is a Bulgarian TV historical drama series released by the Bulgarian National Television in 1981, directed by Nedelcho Chernev, starring Vasil Mihaylov in the title role. The screenplay, written by Nikolay Haytov, is based on his namesake work from 1974 representing the biography of the Bulgarian haidouk and revolutionary Petko Kiryakov (1844-1900). At the beginning of each episode, the writer himself makes an introduction to the historical facts about the life and deeds of Petko.

Petko Sirakov was a Bulgarian wrestler who competed in the 1956 Summer Olympics. He was the father of the former Bulgarian footballer Nasko Sirakov.

Petko Tsankov is a Bulgarian professional footballer who plays as a winger for Lokomotiv Gorna Oryahovitsa.

Ganev or Ganeva is a Bulgarian surname. Notable people with the surname include:

Petko Ilić was a Serbian Chetnik commander active in Macedonia.

Petko Hristov is a Bulgarian professional footballer who plays as a centre-back for Pro Vercelli, on loan from Fiorentina. He has a twin brother Andrea, who plays for Slavia Sofia.

Valentin Atanassov Ganev is a Bulgarian theatre and film actor and theatre director.

Guinio Gochev Ganev was a prominent Bulgarian politician, MP and national ombudsman. He is known as "Man-Parliament" as a deputy in 8 consecutive National Assemblies. On 13 April 2005 he was selected from the 39 National Assembly for the first National Ombudsman of the Republic of Bulgaria.

Petko Lazarov is a former Bulgarian basketball player. He competed in the men's tournament at the 1960 Summer Olympics.