A phalanstère (or phalanstery) was a type of building designed for a self-contained utopian community, ideally consisting of 500–2000 people working together for mutual benefit, and developed in the early 19th century by Charles Fourier. Fourier chose the name by combining the French word phalange (phalanx, an emblematic military unit in ancient Greece), with the word monastère (monastery). [1]

Fourier conceived the phalanstère as an organized building designed to integrate urban and rural features.

The structure of the phalanstère was composed of three parts: a central part and two lateral wings. The central part was designed for quiet activities. It included dining rooms, meeting rooms, libraries and studies. A lateral wing was designed for labour and noisy activities, such as carpentry, hammering and forging. It also hosted children because they were considered noisy while playing. The other wing contained a caravansary, with ballrooms and halls for meetings with outsiders who had to pay a fee in order to visit and meet the people of the Phalanx community. This income was thought to sustain the autonomous economy of the phalanstère. The phalanstère also included private apartments and many social halls. A social hall was defined by Fourier as a seristère.

In France and the United States

Though Fourier published several journals in Paris, among them La Phalanstère, he created no phalanstères in Europe due to a lack of financial support. Several so-called colonies were founded in the United States of America by Albert Brisbane and Horace Greeley.

Fourier believed that the traditional house was a place of exile and oppression of women. He believed gender roles could progress by shaping them within community, more than by pursuits of sexual freedom or other Simonian concepts. [2]

In the 20th century, the architect Le Corbusier adapted the concept of the phalanstère when he designed the Unité d'Habitation , a self-contained commune, at Marseilles. [3]

In the Hungarian play The Tragedy of Man , first published in 1861 by Imre Madách, one of the later scenes takes place in a phalanstery, in a utopian future, where the entirety of humanity lives in phalansteries, there are no borders, no nations, and civilization is dominated by science.

The Phalanstères are mentioned several times in Gustave Flaubert's 1869 novel Sentimental Education : for example, among a list of utopian projects: "plans of phalansteria, projects for cantonal bazaars, systems of public felicity." [4]

They are mentioned in William Morris' News from Nowhere , first published in 1890, with the spelling "phalangsteries."

In the PC game Tristania 3D, the evil Courbèe Dominate empire lives in a phalanstery (spelled "Falanster" in the game) somewhere near Norway, hidden from the rest of the world. In the game, the phalanstery is described as a gigantic city-state, consisting 7 major districts. The protagonist of the game must gain entry into the phalanstery, unfortunately it is very well protected. Eventually he does so, and most of the game takes place inside the phalanstery, although explicitly only level 15 bears the name "Falanster".

In the Booker prize-winning novel Possession by A. S. Byatt, ancestors of the antagonist Mortimer Cropper are described (p. 114) as having attempted to found a phalanstery in New Mexico.

In The Sisters Brothers by Jacques Audiard, Hermann Warm dreams of setting up a phalanstery.

Gustave Flaubert was a French novelist. Highly influential, he has been considered the leading exponent of literary realism in his country. According to the literary theorist Kornelije Kvas, "in Flaubert, realism strives for formal perfection, so the presentation of reality tends to be neutral, emphasizing the values and importance of style as an objective method of presenting reality". He is known especially for his debut novel Madame Bovary (1857), his Correspondence, and his scrupulous devotion to his style and aesthetics. The celebrated short story writer Guy de Maupassant was a protégé of Flaubert.

The phalanx is a rectangular mass military formation.

François Marie Charles Fourier was a French philosopher, an influential early socialist thinker and one of the founders of utopian socialism. Some of Fourier's social and moral views, held to be radical in his lifetime, have become mainstream thinking in modern society. For instance, Fourier is credited with having originated the word feminism in 1837.

Brook Farm, also called the Brook Farm Institute of Agriculture and Education or the Brook Farm Association for Industry and Education, was a utopian experiment in communal living in the United States in the 1840s. It was founded by former Unitarian minister George Ripley and his wife Sophia Ripley at the Ellis Farm in West Roxbury, Massachusetts in 1841 and was inspired in part by the ideals of transcendentalism, a religious and cultural philosophy based in New England. Founded as a joint stock company, it promised its participants a portion of the profits from the farm in exchange for performing an equal share of the work. Brook Farmers believed that by sharing the workload, ample time would be available for leisure activities and intellectual pursuits.

Looking Backward: 2000–1887 is a utopian novel by Edward Bellamy, a journalist and writer from Chicopee Falls, Massachusetts; it was first published in 1888.

Three Tales is a work by Gustave Flaubert that was originally published in French in 1877. It consists of the short stories "A Simple Heart", "Saint Julian the Hospitalier," and "Hérodias".

Paul et Virginie is a novel by Jacques-Henri Bernardin de Saint-Pierre, first published in 1788. The novel's title characters are friends since birth who fall in love. The story is set on the island of Mauritius under French rule, then named Île de France. Written on the eve of the French Revolution, the novel is recognized as Bernardin's finest work. It records the fate of a child of nature corrupted by the artificial sentimentality of the French upper classes in the late eighteenth century. Bernardin de Saint-Pierre lived on the island for a time and based part of the novel on a shipwreck he witnessed there.

The North American Phalanx was a secular utopian socialist commune located in Colts Neck Township, Monmouth County, New Jersey. The community was the longest-lived of about 30 Fourierist Associations in the United States which emerged during a brief burst of popularity during the decade of the 1840s.

"Sentimental Education" is the 58th episode of the HBO original series The Sopranos and the sixth of the show's fifth season. Written by Matthew Weiner and directed by Peter Bogdanovich, it originally aired on April 11, 2004. 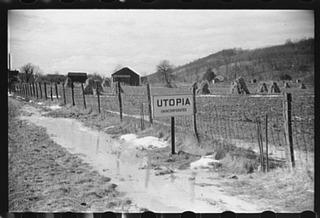 Utopia is an unincorporated community in far southern Franklin Township, Clermont County, Ohio, United States, along the banks of the Ohio River. Utopia has been referred to as a "ghost town" although there are still people who live there.

Fourierism is the systematic set of economic, political, and social beliefs first espoused by French intellectual Charles Fourier (1772–1837). Based upon a belief in the inevitability of communal associations of people who worked and lived together as part of the human future, Fourier's committed supporters referred to his doctrines as Associationism. Political contemporaries and subsequent scholarship has identified Fourier's set of ideas as a form of utopian socialism—a phrase that retains mild pejorative overtones.

Zoé Charlotte de Gamond was a Belgian educator and feminist who sometimes wrote under the pseudonym Marie de G***.

Naomi Schor was a noted literary critic and theorist. A pioneer of feminist theory for her generation, she is regarded as one of the foremost scholars of French literature and critical theory of her time. Naomi's younger sister is the artist and writer Mira Schor.

Jules André Louis Lechevalier was a French utopian socialist, economist and anthropologist. He was at first a Saint-Simonian, then a Fourierist and a collaborator of Proudhon. After 1855 he was also known as Jules Lechevalier Saint-André. His years of birth and death are sometimes given as 1800 and 1850, respectively, but this is incorrect.

Charles Pellarin (1804–1883) was a French naval doctor, utopian socialist, sociologist, anthropologist and journalist. He was the first biographer of Charles Fourier.

Scăieni Phalanstery was a utopic experimental community (phalanstery) created in 1835–36 by Romanian boyar Teodor Diamant in the town of Scăieni, Prahova County, Wallachia based on the ideas of the French socialist Charles Fourier. The experiment was forcefully closed down by the authorities.

Ceresco, also known as the Wisconsin Phalanx, was a commune founded in Fond du Lac County, Wisconsin in 1844 by followers of the communitarian socialist ideas of Charles Fourier. About 180 people lived in the Association at its peak, farming nearly 2,000 acres. It was one of the three longest-lived Fourierist Associations in the United States, dissolving in 1850, and was unique for having assets which exceeded liabilities at the time of its termination.

Utopian socialism is the term often used to describe the first current of modern socialism and socialist thought as exemplified by the work of Henri de Saint-Simon, Charles Fourier, Étienne Cabet, and Robert Owen. Utopian socialism is often described as the presentation of visions and outlines for imaginary or futuristic ideal societies, with positive ideals being the main reason for moving society in such a direction. Later socialists and critics of utopian socialism viewed utopian socialism as not being grounded in actual material conditions of existing society and in some cases as reactionary. These visions of ideal societies competed with Marxist-inspired revolutionary social democratic movements.

"Paris, Capital of the 19th Century" (1938) is one of a diptych of completed essays that was composed during the preparatory outlining and drafting phase of Walter Benjamin's uncompleted composition of the Arcades Project. "The Paris of the Second Empire in Baudelaire" is its sister essay. The major themes of The Arcades Project—the construction of the Parisian arcades in the early 19th century, their blossoming as a habitat for the flâneur, their demolition during Haussmannization—appear as leitmotifs in both essays.