Mennell was born in Newcastle upon Tyne in England, the fourth son of George Mennell, a cokemaker, and his wife Hannah, née Tuke. Philip was the grandson of Samuel Tuke, the Quaker philanthropist and mental-health reformer. [1]

Mennell was privately educated and published Lord John Manners, a Political Biography in 1872. Mennell studied law, was admitted as a solicitor, but soon afterward migrated to Victoria, Australia. [1]

From May 1877, Mennell printed and published the Bairnsdale Advertiser, becoming part-owner in 1879. [1] In 1882, Mennell left for Melbourne and worked for The Age as acting sub-editor and leader-writer. [1]

Mennell returned to London in 1883 and represented The Age's cable syndicate. In 1891 Mennell revisited Australia as special correspondent for the Daily Chronicle. The following year he published his Dictionary of Australasian Biography , [1] sub-titled Comprising Notices of Eminent Colonists From the Inauguration of Responsible Government Down to the Present Time, [2] which contained over 1500 entries. Mennell also published The Coming Colony in 1892, on Western Australia. [1]

Mennell was also editor-proprietor of the British Australasian and New Zealand Mail from December 1892 until shortly before his death. He died in London, England, on 19 October 1905. [1]

James Fletcher was an Australian coalminer and owner, newspaper proprietor and politician, a member of the New South Wales Legislative Assembly.

James Hume Nisbet was a Scottish-born novelist and artist. Many of his thrillers are set in Australia.

The Rev. John West emigrated from England to Van Diemen's Land in 1838 as a Colonial missionary, and became pastor of an Independent (Congregational) Chapel in Launceston's St. John's Square. He also co-founded The Examiner newspaper in 1842 and was later editor of the Sydney Morning Herald. 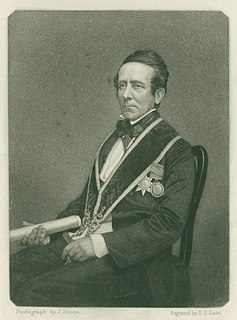 Augustus Frederick Adolphus Greeves was a Mayor of Melbourne and Member of Parliament in Melbourne, Australia.

Thomas Turner à Beckett was a lawyer and politician in colonial Victoria (Australia), member of the Victorian Legislative Council.

James Allen (1806–1886) was an English-born writer, journalist and newspaper owner, who worked in colonial Australia and New Zealand.

The Dictionary of Australasian Biography, sub-titled "Comprising Notices of Eminent Colonists From the Inauguration of Responsible Government Down to the Present Time." published in 1892, is a reference work by Philip Mennell containing information on notable Australian colonists and New Zealanders of the period 1855 to 1892.

John Joseph Shillinglaw, , was a public servant, author and historian in Australia.

Richard Ernest Nowell Twopeny or Twopenny or Turpenny was an Australian rules footballer, journalist and newspaper editor/owner in New Zealand and Australia.

William Bramwell Withers (1823–1913), was an Anglo-Australian historian and journalist.

John Woods was a politician in colonial Victoria (Australia), Minister of Railways.

Alexander Fraser was a businessman and politician in colonial Victoria (Australia), a member of the Victorian Legislative Council. 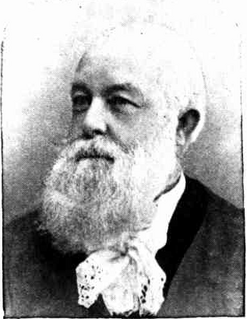 Cornelius Job Ham was a politician in colonial Victoria (Australia), mayor of Melbourne 1881–82 and a member of the Victorian Legislative Council 1882–1904.

George David Langridge was a politician in colonial Victoria (Australia), acting Premier of Victoria in 1891.

Edward Langton was an Australian businessman and politician, Treasurer of Victoria in 1868 and 1872–1874.