Pia de' Tolomei is an oil painting on canvas by English artist Dante Gabriel Rossetti, painted around 1868 and now in the Spencer Museum of Art, on the campus of the University of Kansas in Lawrence, Kansas.

This work was painted at the start of Rossetti's affair with Jane Morris, who modelled for the picture. As he was to do with Beata Beatrix (1870), Rossetti chose a tale by Dante Aligheri (from Purgatorio ) to illustrate his love for his model. The story tells of a woman whose husband imprisoned and later poisoned her: [1] Rossetti wanted the world to believe the fantasy with which he was deluding himself - that William Morris kept Jane against her will. He continued this theme, as shown in Proserpine . [2]

Rossetti not only drew Jane exhaustively, he also choreographed photographic sessions of her and used the photographs as preliminary sketches for drawings. Amongst other representations of her, Rossetti depicts Jane as Proserpine, Queen Guinevere and Desdemona - all of whom were at the mercy of men. [3]

Jane appears disproportionately large in most of Rossetti's pictures. The background is immaterial as long as the viewer focuses on the beauty of her face. In Pia de' Tolomei her elongated neck seems almost dislocated, and the whiteness of her skin shines out, defying the viewer to pay attention to any other aspects of the painting. Miller's hair colour is misrepresented in the painting. Her natural colour was dark brown, yet Rossetti paints it with an auburn tinge - closer to Lizzie Siddal's hair colour than Miller's. Also, her hands are twisted and intertwined in a peculiar way. [4] 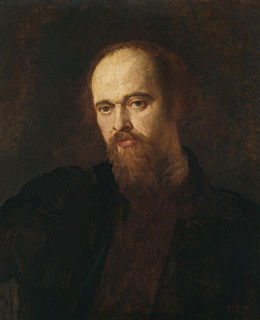 Gabriel Charles Dante Rossetti, generally known as Dante Gabriel Rossetti, was an English poet, illustrator, painter and translator, and a member of the Rossetti family. He founded the Pre-Raphaelite Brotherhood in 1848 with William Holman Hunt and John Everett Millais. Rossetti was later to be the main inspiration for a second generation of artists and writers influenced by the movement, most notably William Morris and Edward Burne-Jones. His work also influenced the European Symbolists and was a major precursor of the Aesthetic movement.

Jane Morris was an English embroiderer and artists' model who embodied the Pre-Raphaelite ideal of beauty. She was a model and muse to her husband William Morris and to Dante Gabriel Rossetti. Her sister was the embroiderer and teacher Elizabeth Burden. 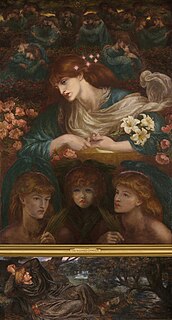 "The Blessed Damozel" is perhaps the best known poem by Dante Gabriel Rossetti as well as the title of some of his best known paintings. The poem was first published in 1850 in the Pre-Raphaelite journal The Germ. Rossetti subsequently revised the poem twice and republished it in 1856, 1870 and 1873.

Bocca Baciata (1859) is a painting by Dante Gabriel Rossetti which represents a turning point in his career. It was the first of his pictures of single female figures, and established the style that was later to become a signature of his work. The model was Fanny Cornforth, the principal inspiration for Rossetti's sensuous figures.

The Oxford Union murals (1857–1859) are a series of mural decorations in the Oxford Union library building. The series was executed by a team of Pre-Raphaelite artists including Dante Gabriel Rossetti, William Morris and Edward Burne-Jones. The paintings depict scenes from Arthurian myth. 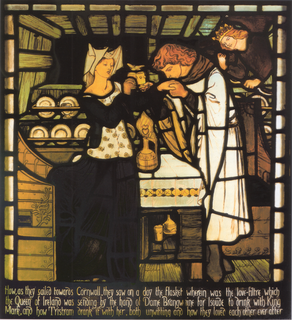 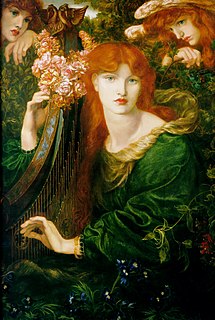 Alexa Wilding was one of the favourite models of the Pre-Raphaelite artist Dante Gabriel Rossetti, featuring in some of his finest paintings of the later 1860s and 1870s. She sat for more of his finished works than any other of his more well-known muses, including Elizabeth Siddall, Jane Morris and Fanny Cornforth. 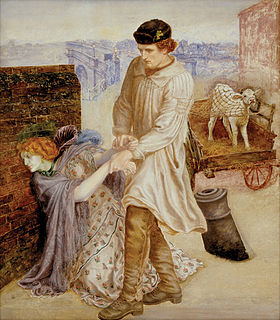 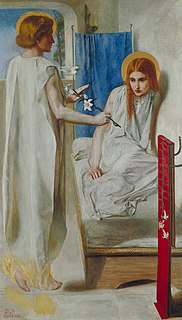 Ecce Ancilla Domini, or The Annunciation, is an oil painting by the English artist Dante Gabriel Rossetti, first painted in 1850 and now in Tate Britain in London. The Latin title is a quotation from the Vulgate text of the first chapter of the Gospel of Saint Luke, describing the Annunciation, where Mary accepts the message brought to her by the Angel Gabriel that she would give birth to a child (Jesus) by God. 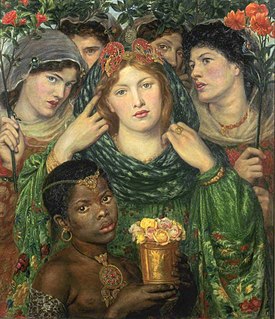 The Beloved is an oil painting on canvas by English artist Dante Gabriel Rossetti, first painted in 1865 and now in Tate Britain.

Proserpine is an oil painting on canvas by English artist and poet Dante Gabriel Rossetti, painted in 1874 and now in Tate Britain. 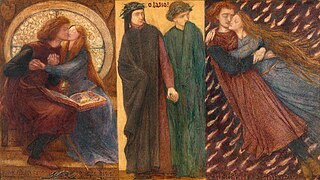 Paolo and Francesca da Rimini is a watercolour by British artist and poet Dante Gabriel Rossetti, painted in 1855 and now in Tate Britain.

Love and the Maiden is a tempera on canvas by English Pre-Raphaelite artist John Roddam Spencer Stanhope, executed in 1877 and currently housed at the Fine Arts Museums of San Francisco.

Veronica Veronese is an oil painting by Dante Gabriel Rossetti painted in 1872 with Alexa Wilding as the model. The painting was conceived as a companion to Lady Lilith. Rossetti sold the painting to one of his best clients, shipping magnate Frederick Richards Leyland. In 1923 it was acquired by the estate of Samuel Bancroft which donated it in 1935 to the Delaware Art Museum. 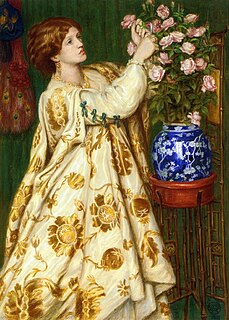 Monna Rosa is the title of two oil paintings by Dante Gabriel Rossetti, both of Frances Leyland, the wife of shipping magnate Frederick Richards Leyland. The earlier and smaller painting was completed in 1862 and its whereabouts is now unknown. The second was completed in 1867 and is now in a private collection.

Water Willow is an 1871 oil painting by Dante Gabriel Rossetti. It depicts Jane Morris in the river landscape near Kelmscott Manor, with the manor in the left background and Kelmscott Church below the hill to the right. 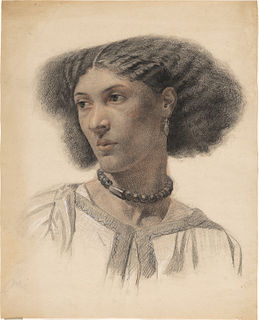 Ligeia Siren is a chalk drawing by Dante Gabriel Rossetti (DGR) that was completed in 1873. The painting depicts a siren, a creature from classic Greek mythology, that also appear in tales such as Homer's Odyssey or Virgil's Georgics. The drawing is predominantly inspired from Rossetti's own 1869 libretto The Doom of the Sirens with which Ligeia is one of the female leads. Instead of depicting the traditional encounter of the siren with her victims entranced by her beauty and powers of music, doomed to a terrible fate, as in The Siren (1900) by John William Waterhouse or Ulysses and the Sirens (1909) by Herbert James Draper. Rossetti depicts a timeless moment, where contrary to his depiction of her in his libretto, she appears tranquil and relatively innocuous to her intended victims in the background.