Pic Bayle is a summit in the Dauphiné Alps, culminating at a height of 3,465 m (11,368 ft), the highest point of the Massif des Grandes Rousses. It is above the resort of Alpe D'Huez. 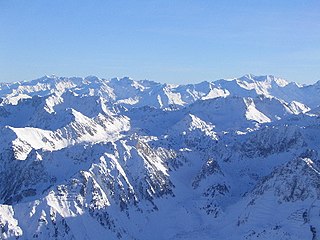 The Pyrenees is a mountain range between Spain and France. Reaching a height of 3,404 metres (11,168 ft) altitude at the peak of Aneto, it extends for about 491 km (305 mi) from its union with Cantabrian Mountains to the Mediterranean Sea.

Pierre Bayle was a French philosopher, author, and lexicographer. He is best known for his Historical and Critical Dictionary, whose publication began in 1697. A Huguenot, Bayle fled to the Dutch Republic in 1681 because of religious persecution in France. Bayle was a notable advocate of religious toleration and his work had a significant influence on the subsequent growth and development of the European Age of Enlightenment. He is regarded as a forerunner of the Encyclopédistes. 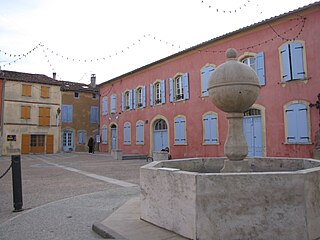 Carla-Bayle is a commune in the Ariège department in southwestern France. It was the birthplace of Pierre Bayle (1647–1706), a Protestant philosopher and writer known for his works on religious toleration and his early encyclopedia.

Essais de Théodicée sur la bonté de Dieu, la liberté de l'homme et l'origine du mal, more simply known as Théodicée, is a book of philosophy by the German polymath Gottfried Leibniz. The book, published in 1710, introduced the term theodicy, and its optimistic approach to the problem of evil is thought to have inspired Voltaire's Candide. Much of the work consists of a response to the ideas of the French philosopher Pierre Bayle, with whom Leibniz carried on a debate for many years. 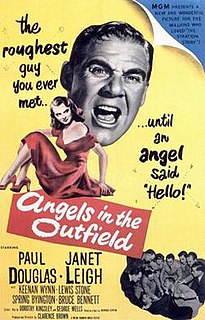 Angels in the Outfield is a 1951 American comedy film produced and directed by Clarence Brown and starring Paul Douglas and Janet Leigh. Based on a story by Richard Conlin, the film is about a young woman reporter who blames the Pittsburgh Pirates' losing streak on their abusive manager, who begins hearing the voice of an angel promising to help the team if he changes his ways. The film was released by Metro-Goldwyn-Mayer on October 19, 1951.

Matt Bayles is an American record producer, mixer, engineer, and musician, based in Seattle, Washington. Bayles is known for his work with bands such as The Classic Crime, Isis, Soundgarden, Pearl Jam, Botch, Mastodon, Minus the Bear, Burnt by the Sun, and Norma Jean and as the keyboardist for American indie rock band, Minus the Bear.

Jean-Michel Bayle is a French former professional motorcycle racer. He was one of the most successful riders of his era, achieving success at the highest levels in both motocross and road racing.

The Strzelecki railway line was a 49 km steam-era branch railway line in Victoria, Australia. The line opened in June 1922, branching off the former Great Southern Railway at Koo Wee Rup Station. The main line branched off the current Pakenham line at Dandenong, extending out into the South Gippsland region.

The Dictionnaire Historique et Critique was a French biographical dictionary written by Pierre Bayle (1647–1706), a Huguenot who lived and published in Holland after fleeing his native France due to religious persecution. In 1689, Bayle began making notes on errors and omissions in Louis Moreri's Grand Dictionaire historique (1674), a previous encyclopedia, and these notes ultimately developed into his own Dictionnaire.

Cazals-des-Baylès is a commune in the Ariège department in southwestern France.

Cyamemazine (Tercian), also known as cyamepromazine, is a typical antipsychotic drug of the phenothiazine class which was introduced by Theraplix in France in 1972 and later in Portugal as well. It is used for the treatment of schizophrenia and, especially, for psychosis-associated anxiety, due to its unique anxiolytic efficacy.

Bayles is a bounded rural locality in Victoria, Australia, 75 kilometers south-east of Melbourne's Central Business District, located within the Shire of Cardinia local government area. Bayles recorded a population of 461 at the 2016 Census. 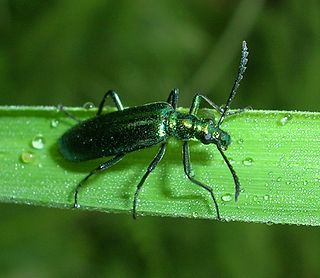 Prionoceridae is a small family of beetles, in the suborder Polyphaga. The form a group within the cleroid beetles and were formerly treated as a subfamily Prionocerinae within the family Melyridae. Very little is known of their life history but most species are pollen feeders as adults and occur in large numbers during spring or the host flowering season. Larvae are predatory or feed on decomposing wood.

The Pat Bayle State Forest is a state forest located near the town of Grand Marais in Cook County, Minnesota. The forest falls within the limits of the Superior National Forest, and falls under the federal jurisdiction of the United States Forest Service.

Events from the year 1706 in France

Eustache Le Noble was a 17th-century French playwright and writer.