Pieniny National Park (Polish : Pieniński Park Narodowy) is a protected area located in the heart of Pieniny Mountains in the southernmost part of Poland. Administratively, the Park lies in the Lesser Poland Voivodeship on the border with Slovakia. Its head office is in Krościenko nad Dunajcem.

The Pieniny mountain chain is divided into three ranges: Pieniny Spiskie, Małe Pieniny, and the Pieniny Właściwe range where the Park is located. The Park’s area is 23.46 square kilometres (9.06 sq mi), of which 13.11 km² is forested. One-third (7.5 km²) is strictly protected. On the Slovak side of the mountains there is a parallel park called the Pieninský národný park.

The idea for the creation of the National Park in Pieniny came from prof. Władysław Szafer, a member of the National Commission for the Preservation of Nature (Polish : Państwowa Komisja Ochrony Przyrody) in 1921. In the same year a private preserve on the area of 75,000 m² was opened by Stanisław Drohojowski around the ruins of the Czorsztyn castle. In 1928 the Polish government made first land purchases and on May 23, 1932 the Ministry of Agriculture created a “National Park in the Pieniny”, on the area of 7.36 km². After the World War II, the decision was confirmed by the Oct 30, 1954 bill, which officially created Pieniny National Park.

The Pieniny mountains are mainly built from limestone and they create picturesque and impressive, almost vertical walls which go down towards the Dunajec River. The most famous summit - Trzy Korony (Three Crowns) is 982 meters above sea level high, however Pieniny’s highest mountain - Wysokie Skałki - is 1050 meters above sea level and is not located on the Park’s area.

Pieniny National Park is located in the Dunajec river basin, and the river occupies important position among factors that influence Pieniny’s look. Even though the Park is small in size, on its area thrive hundreds of species of plants, including 640 kinds of mushrooms. Sometimes, on the same rock, grow plants with opposite means of survival. Park’s meadows, which are the result of human activity, are some of the richest plant ecosystems of Poland (30 to 40 species of flowers for every square meter).

So far around 6500 animal species have been proven to live in the Pieniny. It is supposed that the area is even more abundant - with up to 15 000 species. There are numerous birds, fish, reptiles and amphibians as well as mammals. The most important predator is the lynx. On the shores of the Dunajec the otter thrives.

First permanent human settlements in the Pieniny mountains date back to 1257, when Polish princess Kinga was given nearby lands. In 1280 the princess founded a monastery at Stary Sącz, later the Czorsztyn castle was built. This castle belonged to Poland, on the southern side of the Dunajec valley, the Hungarians built their own, then called Dunajec (today it belongs to Poland and its name is Niedzica). The Dunajec valley in 1997 was flooded by water, as a result of construction of a river dam.

There are 34 kilometres of tourist walking trails in the park, from such peaks as Sokolica and Trzy Korony one can have excellent view on the Pieniny and the Tatra mountains as well as the Dunajec. The Park's main attraction is a river trip on wooden rafts, very popular among all tourists.

The Dunajec is a river running through northeastern Slovakia and southern Poland. It is a right tributary of the Vistula River. It begins in Nowy Targ at the junction of two short mountain rivers, Czarny Dunajec and Biały Dunajec. Dunajec forms the border between Poland and Slovakia for 17 kilometers in the Pieniny Środkowe range, east of the Czorsztyn reservoir.

Podhale is Poland's southernmost region, sometimes referred to as the "Polish highlands". The Podhale is located in the foothills of the Tatra range of the Carpathian mountains.

Szczawnica is a resort town in Nowy Targ County in Lesser Poland Voivodeship, in southern Poland. As of June 30, 2007, its population was 7,378.

Zamagurie is an area in the north of the Spiš region, between the Spišská Magura in the south, the Dunajec river in the north and the Białka river in the west. It is divided between the Prešov Region of Slovakia and the Lesser Poland Voivodeship of Poland and is further divided between the Slovak districts of Stará Ľubovňa and Kežmarok and Polish gminas of Bukowina Tatrzańska, Nowy Targ and Łapsze Niżne. The centre of the region is the Slovak town Spišská Stará Ves, which is just near the border. The region also used to be one of the official tourist regions of Slovakia until 2004. 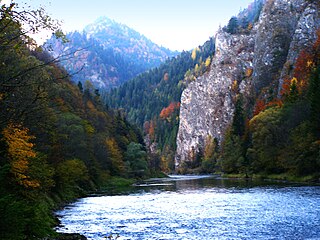 Niedzica Castle also known as Dunajec Castle, is located in the southernmost part of Poland in Niedzica. It was erected between the years 1320 and 1326 by Kokos of Brezovica on the site of an ancient stronghold surrounded by earthen walls in the Pieniny mountains. The Niedzica Castle stands at an altitude of 566 m, on a hill 300 metres (980 ft) upstream from the Dunajec River mouth, measured from the center of the dam on Lake Czorsztyn. The outline of Niedzica Castle can best be viewed from the ruins of Czorsztyn Castle on the other side of the lake. It is known as one of the most picturesque castles in the country and adorns the covers of many books. 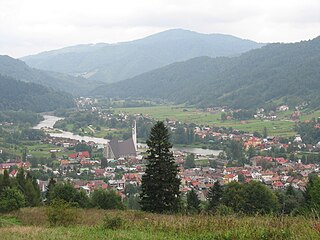 Krościenko nad Dunajcem is a village in southern Poland situated in the Nowy Targ County in Lesser Poland Voivodeship since 1999. it is approximately 31 kilometres (19 mi) east of Nowy Targ and 78 km (48 mi) south-east of the regional capital Kraków. Town rights were given to Krościenko by Kazimierz Wielki in 1348. 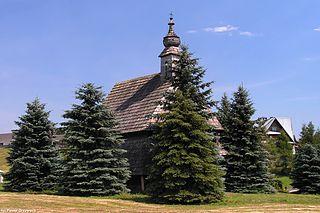 Maniowy is a village in southern Poland situated in the Lesser Poland Voivodeship about 19 kilometres (12 mi) east of Nowy Targ and 71 km (44 mi) south of the regional capital Kraków. It has been the seat of the district of Gmina Czorsztyn since 1993. 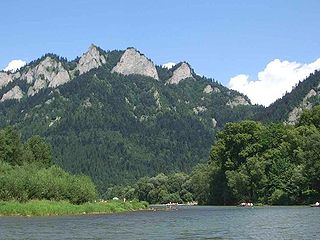 Červený Kláštor is a medieval monastery located in Slovakia. It is located near the village of Červený Kláštor within the Pieniny Mountains, next to the Dunajec River.

The ruins of Czorsztyn Castle are located in the southernmost part of Poland in Czorsztyn, at Czorsztyn Lake within Pieniny National Park borders. On the other side of the Czorsztyn Lake is located Niedzica Castle.

Lake Czorsztyn is a man-made reservoir on the Dunajec river, southern Poland, between the Pieniny and the Gorce Mountains. It owes its existence to a dam, which is located in the village of Niedzica.

The Dunajec river castles is a chain of thirteen medieval castles, built in southern Lesser Poland, along the Dunajec river. The castles protected the border between the Kingdom of Poland and the Kingdom of Hungary, as well as a very important international trade route, which went along the Dunajec and the Poprad all the way down to the Danube river. Most of the castles are in ruins now, and some have disappeared. Their history dates back to the period known as the Fragmentation of Poland in the early 12th century, when, according to his will, known as the Testament of Bolesław III Wrymouth, the country was divided into several provinces. The Dunajec river castles were located on the territory of two castellanies, Wojnicz and Nowy Sącz, in the extreme south of the Seniorate Province.

The Polish-Slovak border is the state border between the Republic of Poland and the Republic of Slovakia and is existing formally in the modern form from January 1, 1993, from the moment of the dissolution of Czechoslovakia into two independent states. Before the collapse of Czechoslovakia, the current border with Slovakia was part of it and had an almost identical course with minor corrections made in later years. It is 541km long.