Pier Andrea Saccardo (23 April 1845 in Treviso, Treviso – 12 February 1920 in Padua) was an Italian botanist and mycologist.

Saccardo studied at the Lyceum in Venice, and then at the Technical Institute of the University of Padua where, in 1867 he received his doctorate and in 1869 became a professor of Natural History. In 1876 he established the journal Michelia which published many of his early mycological papers. In 1879 he became a professor of Botany and director of the botanical gardens of the university.

Saccardo's scientific activity focused almost entirely on mycology. He published over 140 papers on the Deuteromycota (imperfect mushrooms) and the Pyrenomycetes. He was most famous for his Sylloge, which was a comprehensive list of all of the names that had been used for mushrooms. Sylloge is still the only work of this kind that was both comprehensive for the botanical kingdom Fungi and reasonably modern. Saccardo also developed a system for classifying the imperfect fungi by spore color and form, which became the primary system used prior to classification by DNA analysis.

The standard author abbreviation Sacc. is used to indicate this person as the author when citing a botanical name. [1]

Saccardo proposed this color scale in 1894, for standardizing color naming of plant specimens.

Indispensable in the history of mycology is his master work Sylloge fungorum omnium hucusque cognitorum (Padua 1882–90, in nine volumes) followed by the 1931 edition in 25 volumes.

Alessandro Trotter was an Italian botanist and entomologist who pioneered in cecidology, the study of plant galls.

Gyrodon lividus, commonly known as the alder bolete, is a pored mushroom bearing close affinity to the genus Paxillus. Although found predominantly in Europe, where it grows in a mycorrhizal association with alder, it has also recorded from China, Japan and California. Fruit bodies are distinguished from other boletes by decurrent bright yellow pores that turn blue-grey on bruising. G. lividus mushrooms are edible. 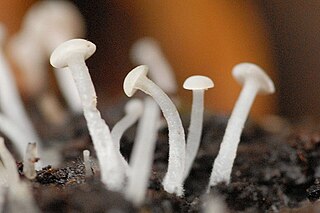 Cudoniella is a genus of fungi in the family Helotiaceae. The genus contains an estimated 30 species. Cudoniella was circumscribed by mycologist Pier Andrea Saccardo in 1889. 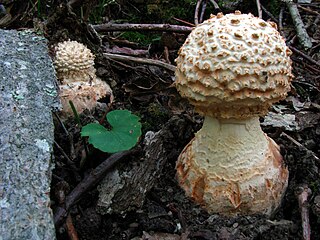 Amanita daucipes is a species of fungus in the family Amanitaceae of the mushroom order Agaricales. Found exclusively in North America, the mushroom may be recognized in the field by the medium to large white caps with pale orange tints, and the dense covering of pale orange or reddish-brown powdery conical warts on the cap surface. The mushroom also has a characteristic large bulb at the base of its stem with a blunt short rooting base, whose shape is suggestive of the common names carrot-footed Lepidella, carrot-foot Amanita, or turnip-foot Amanita. The mushroom has a strong odor that has been described variously as "sweet and nauseous", or compared to an old ham bone, or soap. Edibility is unknown for the species, but consumption is generally not recommended due its position in the Amanita subgroup Lepidella, which contains some poisonous members. 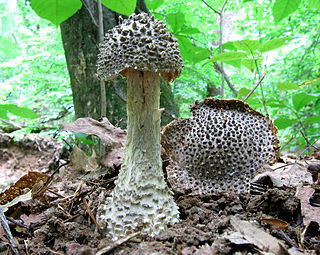 Amanita onusta, commonly known as the loaded Lepidella or the gunpowder Lepidella, is a species of fungus in the mushroom family Amanitaceae. It is characterized by its small to medium-sized fruit bodies that have white to pale gray caps crowded with roughly conical, pyramidal, or irregular gray warts. The stipe is whitish-gray with woolly or wart-like veil remnants, and at the base is a spindle- or turnip-shaped base that is rooted somewhat deeply in the soil. The species is distributed in eastern North America, from Nova Scotia to Mexico, and may be found growing on the ground in deciduous forests, particularly those with oak, hickory and chestnut. Fruit bodies smell somewhat like bleaching powder, and their edibility is unknown, but possibly toxic.

Thelephora palmata is a species of clavarioid fungus in the family Thelephoraceae. The fruit bodies are leathery and coral-like, with branches that are narrow at the base before widening out like a fan and splitting into numerous flattened prongs. The wedge-like tips are whitish when young, but darken as the fungus matures. The common names of the fungus refers to its pungent odor, likened to fetid garlic. A widely distributed but uncommon species, it is found in Asia, Australia, Europe, North America, and South America, where it fruits on the ground in both coniferous and mixed forest.

Entoloma murrayi, commonly known as the yellow unicorn Entoloma or the unicorn pinkgill, is a species of fungus in the Entolomataceae family. First described from New England (USA) in 1859, the species is found in eastern North America, Central and South America, and southeast Asia, where it grows on the ground in wet coniferous and deciduous forests. The fungus produces yellow mushrooms that have a characteristic sharp umbo on the top of a conical cap. The mushroom is inedible and may be poisonous. Other similar species can be distinguished from E. murrayi by differences in color, morphology, or microscopic characteristics.

Mycena chlorophos is a species of agaric fungus in the family Mycenaceae. First described in 1860, the fungus is found in subtropical Asia, including Japan, Taiwan, Polynesia, Indonesia, and Sri Lanka, in Australia, and Brazil. Fruit bodies (mushrooms) have pale brownish-grey sticky caps up to 30 mm (1.2 in) in diameter atop stems 6–30 mm (0.2–1.2 in) long and up to a millimeter thick. The mushrooms are bioluminescent and emit a pale green light. Fruiting occurs in forests on fallen woody debris such as dead twigs, branches, and logs. The fungus can be made to grow and fruit in laboratory conditions, and the growth conditions affecting bioluminescence have been investigated.

Clavulinopsis umbrinella, commonly known as the beige coral, is a coral mushroom in the family Clavariaceae. Fruit bodies are initially white before turning pale brown with darker brown tips. Originally described in 1860, it is known to occur in Europe and North America where it grows in grass. It is not a common species.

Mycena purpureofusca, commonly known as the purple edge bonnet, is a species of agaric fungus in the family Mycenaceae. First described by Charles Horton Peck in 1885, the species is found in Europe and North America, where it grows on the decaying wood and debris of conifers, including cones. Fruit bodies have conical to bell-shaped purple caps up to 2.5 cm (1 in) set atop slender stipes up to 10 cm (4 in) long. The mushroom is named for the characteristic dark greyish-purple color of its gill edges. In the field, M. purpureofusca mushrooms can usually be distinguished from similar species by characteristics such as the dark purple gill edges, the deep purple cap center, and its cartilagineous consistency. The fungus contains a laccase enzyme that has been investigated scientifically for its potential to detoxify recalcitrant industrial dyes used in textile dyeing and printing processes.

Mycena alphitophora is a species of agaric fungus in the family Mycenaceae. Its small, whithe, delicate fruit bodies are characterized by the powdery coatings on the surfaces of both the cap and stipe. Also, the stipe base is not swollen or disk-like. The stipe surface is more hairy than M. tenerrima.

Pluteus aethalus is a species of agaric fungus in the family Pluteaceae. It is found in Cuba. The species was originally named Agaricus aethalus by Miles Joseph Berkeley & Moses Ashley Curtis in 1869, and later transferred to the genus Pluteus by Pier Andrea Saccardo in 1887. It is classified in Pluteus section Celluloderma, subsection Mixtini.

Amanita ananiceps is a species of agaric fungus in the family Amanitaceae native to Australia.

Giovanni Battista Traverso was an important mycologist and plant pathologist on the early 1900s. He was born in Pavia, Italy on October 25, 1878 and died on January 22, 1955. He was interested in the flora since his early years what could be seen on his prints that he gave to the catalog of the vascular plants of Pavia in 1898.

Mycena subcaerulea is a species of mushroom-forming fungus in the family Mycenaceae. It produces small, thin-fleshed fruitbodies with pale bluish-green caps upon slender stipes. The centers of the caps are darker in colour than the margins, and the cap cuticle can be peeled off. The fungus was first described in 1873 as Agaricus subcaeruleus by American mycologist Charles Horton Peck. His original collections, found growing on the trunks of decaying beech trees, were made in woods of the Adirondack Mountains in Upstate New York. Pier Andrea Saccardo transferred the species to the genus Mycena in 1887.

Geopyxis vulcanalis, commonly known as the vulcan pixie cup, is a species of cup fungus in the family Pyronemataceae. It was first described scientifically in 1878 by American mycologist Charles Horton Peck, from collections made in the Adirondack Mountains in Upstate New York. Pier Andrea Saccardo transferred it to the genus Geopyxis in 1889. Fruitbodies of G. vulcanalis are small and cup-like, with a light yellow hymenium. They become somewhat flattened in age. It grows on the ground in unburned conifer litter, often with mosses. Its spores are smooth and elliptical, measuring 14–21 by 8–11 µm.

Augusto Napoleone Berlese was an Italian botanist and mycologist. He was the brother of entomologist Antonio Berlese 1863–1927, with whom he founded the journal Rivista di patologia vegetale in 1892.

This article is based, in part, on information from the Meyers Konversations-Lexikon of 1890.