Egan's parents were Irish migrants, but he may have been born in the London area. He went into the printing trade, and was a compositor for George Smeeton in 1812. [1] He established himself as the country's leading reporter of sporting events, which at the time meant mainly prize-fights and horse-races.

It was Egan who first defined boxing as "the sweet science". He died on the 3rd August 1849 and is buried in Highgate Cemetery, North London.

In 1814 he wrote, set and printed a book about the relationship between the Prince Regent and Mary Robinson, called The Mistress of Royalty, or the Loves of Florizel and Perdita. [2] However, he soon became known for his sporting work. Four volumes of Boxiana; or Sketches of Ancient and Modern Pugilism appeared, lavishly illustrated, between 1813 and 1824. Following a dispute with his publisher, Egan was replaced for the fourth Boxiana volume (replaced by "Jon Bee"), the court permitting Egan continued rights to the title provided he used the New Series prefix. Two volumes of Egan's New Series Boxiana were published in 1828/29. [3] In 1821 Egan announced the publication of a regular journal: Life in London, appearing monthly at a shilling a time. It was to be illustrated by George Cruikshank (1792–1878), and was dedicated to the king, George IV, who at one time had received Egan at court. The first edition of Life in London or, the Day and Night Scenes of Jerry Hawthorn, esq., and his elegant friend, Corinthian Tom, accompanied by Bob Logic, the Oxonian, in their rambles and sprees through the Metropolis appeared on 15 July 1821.

Egan's creation was an instant success, and was an early favourite of Thackeray's. [4] Pirate versions appeared, featuring such figures as "Bob Tallyho", "Dick Wildfire" and the like. Print-makers speedily knocked off cuts featuring the various "stars" and the real-life public flocked to the "sporting" addresses that Egan had his heroes frequent. There was a translation into French. At least six plays were based on Egan's characters, contributing to yet more sales. One of these was exported to America, launching the Tom and Jerry craze there. The version created by William Thomas Moncrieff was praised as The Beggar's Opera of its day. Moncrieff's production of Tom and Jerry, or Life in London ran continuously at the Adelphi Theatre for two seasons and it was the dramatist's work as much as the author's that did so much to popularise the book's trademark use of fashionable slang. Life in London appeared until 1828, when Egan closed it down.

Egan published a report of the trial of John Thurtell and Joseph Hunt, for the murder of William Weare. Thurtell allegedly mentioned, just seven hours before his execution, that among his final wishes was a desire to read Egan's coverage of a recent prizefight. Egan wrote also satirical legal pieces such as The Fancy Tog's Man versus Young Sadboy, the Milling Quaker. In 1824 he launched a new journal, Pierce Egan's Life in London and Sporting Guide, a weekly newspaper priced at eightpence-halfpenny. Other works included sporting anecdotes, theatrical autobiographies, guide-books, and 'fancy ditties'. Among his later efforts, in 1838, was a series of pieces on the delights to be found on and immediately adjacent to the Thames. It was dedicated, with permission, to the young Queen Victoria and featured the illustrative work of his son Pierce Egan the Younger.

In 1823 Egan produced an edition of Francis Grose's Classical Dictionary of the Vulgar Tongue (1785 et seq.), including mainly sporting Regency slang. He also cut the "coarse" and "broad" expressions which Grose had allowed. The 1788 and 1823 definitions of "Academy, or Pushing School" show the extent of his wish to soften definitions "where propriety pointed out such a course as not only necessary, but, perhaps, essential". However, although he noted in his Preface that some slang terms had developed a different meaning, giving as an example rum—which Grose had defined as "Fine, good, valuable", but which "is now generally used for the very opposite qualities"—Egan allowed Grose's definition to remain in the dictionary itself.

And as Egan's character Corinthian Tom explains in Life in London,

A kind of cant phraseology is current from one end of the Metropolis to the other, and you will scarcely be able to move a single step, my dear JERRY, without consulting a Slang Dictionary, or having some friend at your elbow to explain the strange expressions which, at every turn, will assail your ear. Such a dictionary is what Egan offers, hoping in sum that his efforts work "to improve, and not to degrade mankind; to remove ignorance, and put the UNWARY on their guard; to rouse the sleepy, and to keep them AWAKE; to render those persons who are a little UP, more FLY: and to cause every one to be down to those tricks, manoeuvres and impositions practised in life, which daily cross the paths of both young and old."

John Camden Hotten brought out a reprint of Life in London in 1869. "Tom and Jerry", the celebrated duo, have been perpetuated in Metro-Goldwyn-Mayer's cartoon cat and mouse, and as the male protagonists of the 1970s' BBC television sitcom The Good Life .

Pierce Egan was one of the narrators of George MacDonald Fraser's book Black Ajax , about Tom Molineaux and his quest for the heavyweight championship of England. One chapter of the book also featured schoolboy versions of Egan's characters from Life in London.

Tom and Jerry are cat and mouse cartoon characters, Tom Cat and Jerry Mouse, that debuted in 1940. 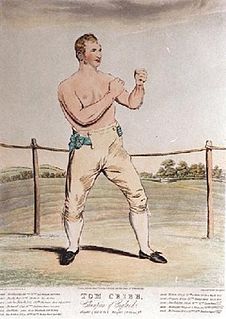 Tom Cribb was a world champion English bare-knuckle boxer of the 19th century. 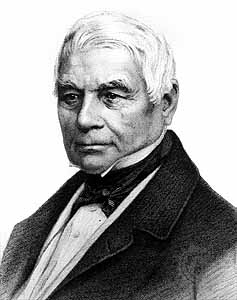 John Gully was an English prize-fighter, horse racer and politician who sat in the House of Commons from 1832 to 1837.

Boxiana is the title given to a series of volumes of prizefighting articles written by the English sportswriter and journalist Pierce Egan, and part-published by George Smeeton in the 1810s.

John Jackson was a celebrated English pugilist of the late 18th century. He became the 17th bare-knuckle boxing champion of all England on 15 April 1795, when he defeated Daniel Mendoza. 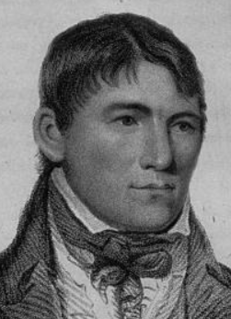 Jack Randall, nicknamed "The Nonpareil", was an exceptional English bare-knuckle boxer, dominant at his weight class, who fought from 1815–22, and retired undefeated. Colonel Barton was his most frequent patron. 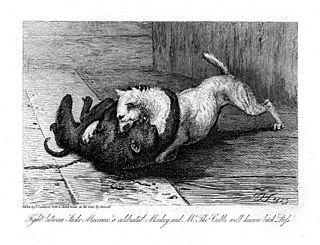 Jacco Macacco was a fighting ape or monkey who was exhibited in monkey-baiting matches at the Westminster Pit in London in the early 1820s. He achieved some measure of fame among the sporting community through his reputed prodigious record of victories against dogs, but was brought to wider attention by depiction in popular literature, artworks and by citation in speeches to Parliament by the animal welfare campaigner Richard Martin. Jacco's most famous fight, against the equally well-known bitch Puss, seems to have marked the end of his career: he may have died as a result of injuries received during the match or of an unrelated illness sometime afterwards. His ashes are housed at the True Crime Museum in Hastings, East Sussex.

Tom and Jerry, or Life in London was a stage adaptation by William Moncrieff of Pierce Egan's Life in London, or Days and Nights of Jerry Hawthorne and his elegant friend Corinthian Tom. It ran at the Adelphi Theatre in London between 1821 and 1823 and at several New York theaters beginning in 1823. The London production included real beggars like Billy Waters who had previously busked outside theatres.

Samuel Elias, better known as Dutch Sam, was a professional boxing pioneer and was active between the years 1801 and 1814. Known as the hardest hitter of his era, he earned the nickname "The Man with the Iron Hand". He was also known as "The Terrible Jew" referencing his Jewish ancestry.

Tom Johnson was a bare-knuckle fighter who was referred to as the Champion of England between 1784 and 1791. His involvement in pugilistic prizefighting is generally seen to have coincided with a renewed interest in the sport. Although a strong man, his success was largely attributed to his technical abilities and his calm, analytical approach to despatching his opponents. But Johnson was less prudent outside the ring; he was a gambler and considered by many of his acquaintances to be an easy mark. He is thought to have earned more money from the sport than any other fighter until nearly a century later, but much of it was squandered.

Daniel Donnelly was a professional boxing pioneer and the first Irish-born heavyweight champion. He was posthumously inducted into the International Boxing Hall of Fame, Pioneers Category in 2008. 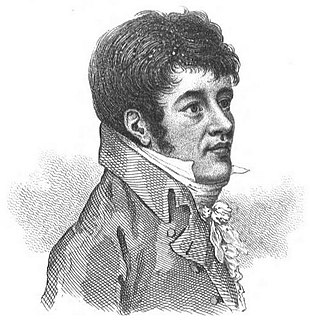 Henry "Hen" Pearce was an English bare-knuckle prizefighter who fought under the London Prize Ring rules and was the recognised English Champion from 1804 until his retirement due to ill health in 1807.

John Badcock was an English sporting writer, still not identified, who published between 1816 and 1830, under the pseudonyms of Jon Bee and John Hinds. He wrote works on boxing and horse racing. Internal evidence suggests only a connection with Devon or Cornwall.

Billy Waters was a black man who busked in London in the nineteenth century by singing, playing the violin and entertaining theatre goers with his "peculiar antics". He became famous when he appeared as a character in William Thomas Moncrieff's Tom and Jerry, or Life in London in 1821. 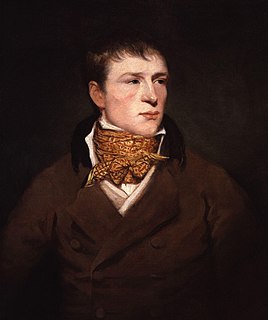 James Belcher, also known as Jem Belcher, was an English bare-knuckle prize-fighter and Champion of All England 1800–1805.

George Smeeton was an English printer and compiler of biographical collections.

Life in London may refer to: