Pierre Cabanne (September 23, 1921, in Carcassonne – January 24, 2007, in Meudon) was a French art historian. He is best remembered for his extensive research and writings on the art history of painters Rembrandt, Van Gogh, and Picasso. He also authored a book on his interviews with Marcel Duchamp. [1] [2] [3] [4] [5] 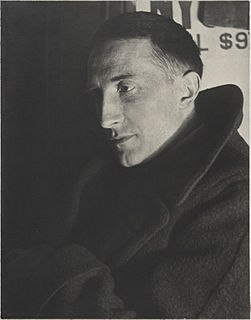 Henri-Robert-Marcel Duchamp was a French-American painter, sculptor, chess player, and writer whose work is associated with Cubism, Dada, and conceptual art. Duchamp is commonly regarded, along with Pablo Picasso and Henri Matisse, as one of the three artists who helped to define the revolutionary developments in the plastic arts in the opening decades of the 20th century, responsible for significant developments in painting and sculpture. Duchamp has had an immense impact on twentieth-century and twenty first-century art, and he had a seminal influence on the development of conceptual art. By the time of World War I he had rejected the work of many of his fellow artists as "retinal" art, intended only to please the eye. Instead, Duchamp wanted to use art to serve the mind.

Man Ray was an American visual artist who spent most of his career in Paris. He was a significant contributor to the Dada and Surrealist movements, although his ties to each were informal. He produced major works in a variety of media but considered himself a painter above all. He was best known for his pioneering photography, and he was a renowned fashion and portrait photographer. Man Ray is also noted for his work with photograms, which he called "rayographs" in reference to himself. 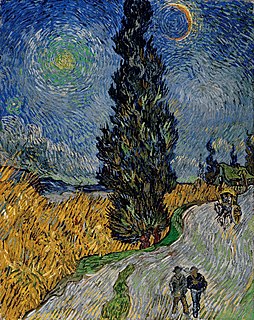 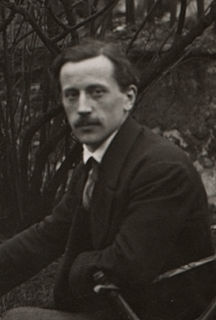 Raymond Duchamp-Villon was a French sculptor.

The 1913 Armory Show, also known as the International Exhibition of Modern Art, was a show organized by the Association of American Painters and Sculptors in 1913. It was the first large exhibition of modern art in America, as well as one of the many exhibitions that have been held in the vast spaces of U.S. National Guard armories. 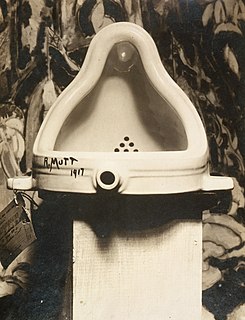 Fountain is a readymade sculpture by Marcel Duchamp in 1917, consisting of a porcelain urinal signed "R. Mutt". In April 1917, an ordinary piece of plumbing chosen by Duchamp was submitted for an exhibition of the Society of Independent Artists, the inaugural exhibition by the Society to be staged at The Grand Central Palace in New York. When explaining the purpose of his Readymade sculpture, Duchamp stated they are "everyday objects raised to the dignity of a work of art by the artist's act of choice." In Duchamp's presentation, the urinal's orientation was altered from its usual positioning. Fountain was not rejected by the committee, since Society rules stated that all works would be accepted from artists who paid the fee, but the work was never placed in the show area. Following that removal, Fountain was photographed at Alfred Stieglitz's studio, and the photo published in the Dada journal The Blind Man. The original has been lost. 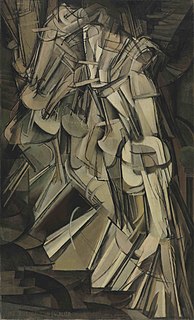 Nude Descending a Staircase, No. 2 is a 1912 painting by Marcel Duchamp. The work is widely regarded as a Modernist classic and has become one of the most famous of its time. Before its first presentation at the 1912 Salon des Indépendants in Paris it was rejected by the Cubists as being too Futurist. It was then exhibited with the Cubists at Galeries Dalmau's Exposició d'Art Cubista, in Barcelona, 20 April–10 May 1912. The painting was subsequently shown, and ridiculed, at the 1913 Armory Show in New York City.

The Section d'Or, also known as Groupe de Puteaux or Puteaux Group, was a collective of painters, sculptors, poets and critics associated with Cubism and Orphism. Based in the Parisian suburbs, the group held regular meetings at the home of the Duchamp brothers in Puteaux and at the studio of Albert Gleizes in Courbevoie. Active from 1911 to around 1914, members of the collective came to prominence in the wake of their controversial showing at the Salon des Indépendants in the spring of 1911. This showing by Albert Gleizes, Jean Metzinger, Robert Delaunay, Henri le Fauconnier, Fernand Léger and Marie Laurencin, created a scandal that brought Cubism to the attention of the general public for the first time.

Calvin Tomkins is an author and art critic for The New Yorker magazine. 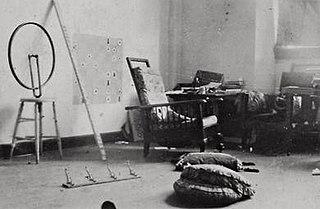 The readymades of Marcel Duchamp are ordinary manufactured objects that the artist selected and modified, as an antidote to what he called "retinal art". By simply choosing the object and repositioning or joining, titling and signing it, the found object became art.

Pierre Matisse was a French-American art dealer active in New York City. He was the youngest child of French painter Henri Matisse.

Maurice Princet was a French mathematician and actuary who played a role in the birth of cubism. He was an associate of Pablo Picasso, Guillaume Apollinaire, Max Jacob, Jean Metzinger, and Marcel Duchamp. He is known as "le mathématicien du cubisme". 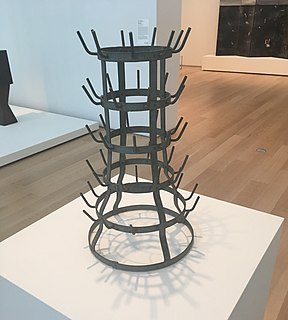 The Bottle Rack is a proto-Dada artwork created in 1914 by Marcel Duchamp. Duchamp labeled the piece a "readymade", a term he used to describe his collection of ordinary, manufactured objects not commonly associated with art. The readymades did not have the serious tone of European Dada works, which criticized the violence of World War I, and instead focused on a more nonsensical nature, chosen purely on the basis of a "visual indifference". 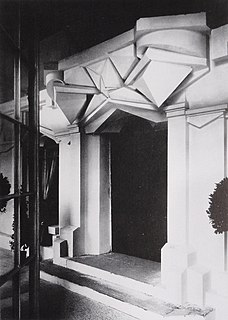 La Maison Cubiste, also called Projet d'hôtel, was an architectural installation in the Art Décoratif section of the 1912 Paris Salon d'Automne which presented a Cubist vision of architecture and design. Critics and collectors present at the exhibition were confronted for the first time with the prospect of a Cubist architecture. 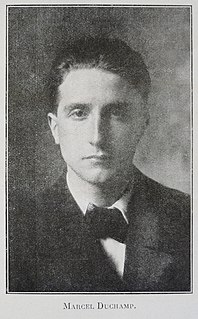 Tulip Hysteria Co-ordinating is a fictitious work of art by Marcel Duchamp.

Instead of painting something new, my aim was to reproduce the paintings and objects I liked and collect them in as small a space as possible. I did not know how to go about it. I first thought of a book, but I did not like the idea. Then it occurred to me that it could be a box in which all my works would be collected and mounted like in a small museum, a portable museum, so to speak. This is it, this valise.

Yvonne and Magdeleine Torn in Tatters is a 1911 painting by Marcel Duchamp, created when he was 24 years old. It depicts two of his younger sisters, Yvonne (1895) and Magdeleine (1898). Magdeleine was the youngest of his sisters and approximately 13 years old at the time. She is also the sitter for Apropos of Little Sister. Both sisters appear, together with their mother in Sonata, and with their older brothers in The Chess Game from 1910. The title is a pun; the French word for tearing, déchiqueter sounds like echiquier, (checkerboard). Duchamp uses a cubist technique, fragmentation, but as he explained in an interview with Pierre Cabanne: "this tearing was fundamentally an interpretation of Cubist dislocation". 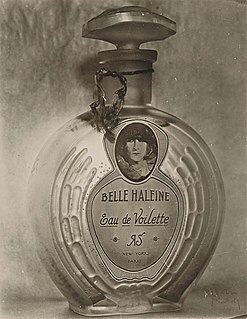 Belle Haleine, Eau de Voilette is a work of art by Marcel Duchamp, with the assistance of Man Ray. First conceived in 1920, created spring of 1921, Belle Haleine is one of the Readymades of Marcel Duchamp, or more specifically a rectified ready-made.