Pierre Marie Félix Janet (French:  [ʒanɛ] ; 30 May 1859 – 24 February 1947) was a pioneering French psychologist, physician, philosopher, and psychotherapist in the field of dissociation and traumatic memory.

He is ranked alongside William James and Wilhelm Wundt as one of the founding fathers of psychology. [1]

Janet studied under Jean-Martin Charcot at the Psychological Laboratory in the Pitié-Salpêtrière Hospital in Paris. He first published the results of his research in his philosophy thesis in 1889 and in his medical thesis, L'état mental des hystériques, in 1892. He earned a degree in medicine the following year in 1893.

In 1898, Janet was appointed lecturer in psychology at the Sorbonne, and in 1902 he attained the chair of experimental and comparative psychology at the Collège de France, a position he held until 1936. He was a member of the Institut de France from 1913, and was a central figure in French psychology in the first half of the 20th century. [2]

Janet was one of the first people to allege a connection between events in a subject's past life and their present-day trauma, and coined the words "dissociation" [3] and "subconscious". [4] His study of the "magnetic passion" or "rapport" between the patient and the hypnotist anticipated later accounts of the transference phenomenon. [5]

The 20th century saw Janet developing a grand model of the mind in terms of levels of energy, efficiency and social competence, which he set out in publications including Obsessions and Psychasthenia (1903) and From Anguish to Ecstasy (1926), among others. [6] In its concern for the construction of the personality in social terms, this model has been compared to the social behaviorism of George Herbert Mead [7] something which explains Lacan's early praise of "Janet, who demonstrated so admirably the signification of feelings of persecution as phenomenological moments in social behaviour". [8]

Janet established a developmental model of the mind in terms of a hierarchy of nine "tendencies" of increasingly complex organisational levels. [9]

He detailed four "lower tendencies", rising from the "reflexive" to the "elementary intellectual"; two "middle tendencies", involving language and the social world; and three "higher tendencies", the "rational-ergotic" world of work, and the "experimental and progressive tendencies". [10]

According to Janet, neurosis could be seen as a failure to integrate, or a regression to earlier tendencies, [11] and he defined subconsciousness as "an act which has kept an inferior form amidst acts of a higher level". [12]

In his 1890 essay The Hidden Self, [13] William James wrote of P. Janet's observations of "hysterical somnambulist" patients at Havre Hospital, detailed in Janet's 1889 doctorate of letters thesis, De l'Automatisme Psychologique. [14] James made note of various aspects of automatism and the apparent multiple personalities ("two selves") of patients variously exhibiting "trances, subconscious states" or alcoholic delirium tremens. James was apparently fascinated by these manifestations and said, "How far the splitting of the mind into separate conciousnesses may obtain in each one of us is a problem. P. Janet holds that it is only possible where there is an abnormal weakness, and consequently a defect of unifying or coordinating power."

Controversy over whose ideas came first, Janet's or Sigmund Freud's, emerged at the 1913 Congress of Medicine in London. [15] Prior to that date, Freud had freely acknowledged his debt to Janet, particularly in his work with Josef Breuer, writing for example of "the theory of hysterical phenomena first put forward by P. Janet and elaborated by Breuer and myself". [16] He stated further that "we followed his example when we took the splitting of the mind and dissociation of the personality as the centre of our position", but he was also careful to point out where "the difference lies between our view and Janet's". [17]

Writing in 1911 of the neurotic's withdrawal from reality, Freud stated: "Nor could a fact like this escape the observation of Pierre Janet; he spoke of a loss of 'the function of reality'", [18] and as late as 1930, Freud drew on Janet's expression "psychological poverty" in his work on civilisation. [19]

However, in his report on psychoanalysis in 1913, Janet argued that many of the novel terms of psychoanalysis were only old concepts renamed, even down to the way in which his own "psychological analysis" preceded Freud's "psychoanalysis". [20] This provoked angry attacks from Freud's followers, and thereafter Freud's own attitude towards Janet cooled. In his lectures of 1915-16, Freud said that "for a long time I was prepared to give Janet very great credit for throwing light on neurotic symptoms, because he regarded them as expressions of idées inconscientes which dominated the patients". However, after what Freud saw as his backpedalling in 1913, he said, "I think he has unnecessarily forfeited much credit". [21]

The charge of plagiarism stung Freud especially. In his autobiographical sketch of 1925, he denied firmly that he had plagiarized Janet, [22] and as late as 1937, he refused to meet Janet on the grounds that "when the libel was spread by French writers that I had listened to his lectures and stolen his ideas he could with a word have put an end to such talk" [23] but did not.

A balanced judgement might be that Janet's ideas, as published, did indeed form part of Freud's starting point, but that Freud subsequently developed them substantively in his own fashion. [24]

Carl Jung studied with Janet in Paris in 1902 [25] and was much influenced by him, for example equating what he called a complex with Janet's idée fixe subconsciente. [26]

Jung's view of the mind as "consisting of an indefinite, because unknown, number of complexes or fragmentary personalities" [27] built upon what Janet in Psychological Automatism called "simultaneous psychological existences". [28]

Jung wrote of the debt owed to "Janet for a deeper and more exact knowledge of hysterical symptoms", and talked of "the achievements of Janet, Flournoy, Freud and others" [29] in exploring the unconscious.

Alfred Adler openly derived his inferiority complex concept from Janet's Sentiment d'incomplétude, [30] and the two men cited each other's work on the issue in their writings. [31]

In 1923, Janet wrote a definitive text on suggestion, La médecine psychologique, and in 1928-32 published several definitive papers on memory.

While Janet did not publish much in English, the 15 lectures that he gave to the Harvard Medical School between 15 October and the end of November 1906 were published in 1907 as The Major Symptoms of Hysteria. He received an honorary doctorate from Harvard in 1936.

Of his great synthesis of human psychology, Henri Ellenberger wrote that "this requires about twenty books and several dozen of articles". [32]

The unconscious mind consists of the processes in the mind which occur automatically and are not available to introspection and include thought processes, memories, interests and motivations.

Free association is the expression of the content of consciousness without censorship as an aid in gaining access to unconscious processes. The technique is used in psychoanalysis which was originally devised by Sigmund Freud out of the hypnotic method of his mentor and colleague, Josef Breuer.

In psychology, sublimation is a mature type of defense mechanism, in which socially unacceptable impulses or idealizations are transformed into socially acceptable actions or behavior, possibly resulting in a long-term conversion of the initial impulse.

In psychology, an inferiority complex is an intense personal feeling of inadequacy, often resulting in the belief that one is in some way deficient, or inferior, to others.

In psychology, displacement is an unconscious defence mechanism whereby the mind substitutes either a new aim or a new object for goals felt in their original form to be dangerous or unacceptable.

In psychology, the subconscious is the part of the mind that is not currently in focal awareness.

Depth psychology refers to the practice and research of the science of the unconscious, covering both psychoanalysis and psychology. It is also defined as the psychological theory that explores the relationship between the conscious and the unconscious, as well as the patterns and dynamics of motivation and the mind. The theories of Sigmund Freud, Carl Gustav Jung, and Alfred Adler are considered its foundations.

Morton Henry Prince was an American physician who specialized in neurology and abnormal psychology, and was a leading force in establishing psychology as a clinical and academic discipline.

Studies on Hysteria is an 1895 book by Sigmund Freud, the founder of psychoanalysis, and the physician Josef Breuer. It consists of a joint introductory paper ; followed by five individual studies of "hysterics" – Breuer's famous case of Anna O., seminal for the development of psychoanalysis, and four more by Freud— including his evaluation of Emmy von N— and finishing with a theoretical essay by Breuer and a more practice-oriented one on therapy by Freud. 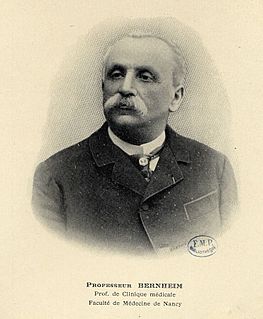 Hippolyte Bernheim was a French physician and neurologist, born at Mülhausen, Alsace. He is chiefly known for his theory of suggestibility in relation to hypnotism.

Henri Frédéric Ellenberger was a Canadian psychiatrist, medical historian, and criminologist, sometimes considered the founding historiographer of psychiatry. Ellenberger is chiefly remembered for The Discovery of the Unconscious, an encyclopedic study of the history of dynamic psychiatry published in 1970.

The Discovery of the Unconscious: The History and Evolution of Dynamic Psychiatry is a 1970 book about the history of dynamic psychiatry by the Swiss medical historian Henri F. Ellenberger, in which the author discusses such figures as Franz Anton Mesmer, Sigmund Freud, Pierre Janet, Alfred Adler, and Carl Jung. The book was first published in the United States by Basic Books. The work has become a classic, and has been credited with correcting older estimates of Freud's level of originality and encouraging scholars to question the scientific validity of psychoanalysis. Critics have questioned the reliability of some of Ellenberger's judgments [lacks citation].

Regression, according to psychoanalyst Sigmund Freud, is a defense mechanism leading to the temporary or long-term reversion of the ego to an earlier stage of development rather than handling unacceptable impulses in a more adaptive way. The defense mechanism of regression, in psychoanalytic theory, occurs when an individual's personality reverts to an earlier stage of development, adopting more childish mannerisms.

Splitting is the failure in a person's thinking to bring together the dichotomy of both positive and negative qualities of the self and others into a cohesive, realistic whole. It is a common defense mechanism. The individual tends to think in extremes.

Foreclosure is the English translation of a term that the French psychoanalyst Jacques Lacan introduced into psychoanalysis to identify a specific psychical cause for psychosis.

René Laforgue was a French psychiatrist and psychoanalyst.

Emotional flooding is a form of psychotherapy that involves attacking the unconscious and/or subconscious mind to release repressed feelings and fears. Many of the techniques used in modern emotional flooding practice have roots in history, some tracing as far back as early tribal societies. For more information on emotional flooding, see Flooding (psychology).