Pierre Nlend Womé (born 26 March 1979) is a Cameroonian former professional footballer who played as a defender. A journeyman, Womé was a versatile and skillful left wingback who played for 14 clubs in six countries.

After spending his youth career at Fogape Yaoundé and the relatively eminent regional side Canon Yaoundé, Womé moved to Italy from Cameroon in the summer of 1996 to start his professional career. He began his senior career at Vicenza Calcio and spent almost seven years playing in Italy until moving to English Premier League side Fulham FC in August 2002. [1] He was sold to Bologna F.C. 1909 in a co-ownership deal for 6 billion lire in 1999, [2] until Roma acquired him for 2 billion lire in the same summer that Francesco Antonioli, Amedeo Mangone and Alessandro Rinaldi joined Roma for 10 billion lire, 13 billion lire and 6 billion lire respectively. In June 2000 Bologna acquired Womé outright for a fee of 1 million lire. During his time in England at Fulham, Womé scored once in the league, in a 3–0 win over West Brom in February 2003. [3]

After playing for some notable clubs, including RCD Espanyol, F.C. Internazionale Milano and SV Werder Bremen, Womé joined 1. FC Köln in the summer of 2008 [4] and left the team on 30 June 2010.

In late February 2012, it was announced that Womé would join Coton Sport FC de Garoua in his homeland. [5] [6]

In January 2014, he moved to Canon Yaoundé's league rivals UMS de Loum. [8] [9] After not having made an appearance under two coaches, he decided to leave the city and return to Yaoundé. The club's president, Pierre Kwemo, threatened to take Womé to court for "fraud and breach of trust". [10] In March, two months after joining the club, he agreed the termination of his contract. [11]

Womé was a regular starter in the left back position for Cameroon during the late 1990s and early 2000s. He was a key member of the squads that won consecutive African Cup of Nations titles in 2000 and 2002 and the Olympic gold medal in 2000. All three tournaments were won on penalty shoot-outs, and Womé was a taker in all three victories. In the Olympic gold medal match, Womé scored the fifth and decisive penalty to win the title for his country. He also scored from the spot in the 2000 African Cup of Nations final, but his penalty in the following tournament was saved by Senegal's Tony Sylva. Womé also played as Cameroon's first choice left back in the 1998 and 2002 World Cups.

On 8 October 2005, Womé missed a 95th-minute penalty during Cameroon's final World Cup qualifier against Egypt that would have sent the Indomitable Lions to the 2006 FIFA World Cup; unfortunately for Womé he cannoned the shot off the outside of the post and Ivory Coast qualified at their expense.

During a press conference several days afterward, Womé said about the penalty: “No one wanted to take that penalty. No one. Neither Samuel Eto'o nor our captain Rigobert Song, because they knew what could have happened if they missed. I have always had the courage and I went to the spot.” He also claimed that some Cameroon fans wanted to kill him. [16]

On 19 March 2007, Womé announced his retirement from international football. [17] He later returned to the team in 2009 for a 2010 FIFA World Cup qualification match against Morocco. [18]

In March 2017, Womé was appointed sporting director of Canon Yaoundé by the club's president Emmannuel Mve. [7] [19]

The Cameroon national football team, represents Cameroon in men's international association football and It is controlled by the Fédération Camerounaise de Football and The team has qualified seven times for the FIFA World Cup, more than any other African team. However, the team has only made it once out of the group stage, They were the first African team to reach the quarter-final of the FIFA World Cup in 1990, losing to England in extra time, They have also won five Africa Cup of Nations and Olympic gold in 2000, The team represents both FIFA and Confederation of African Football (CAF).

The 1972 Africa Cup of Nations was the eighth edition of the Africa Cup of Nations, the association football championship of Africa (CAF). It was hosted by Cameroon, in the cities of Yaoundé and Douala. Just like in 1970, the field of eight teams was split into two groups of four. The People's Republic of the Congo won its first championship, beating Mali in the final 3−2.

Jacques Celestin Songo'o is a Cameroonian retired footballer who played as a goalkeeper and current goalkeeper coach of Cameroon. 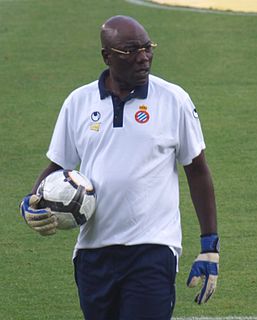 The Super Coupe Roger Milla is a match competition in Cameroon football, played between the Cameroon Premiere Division champions and the Cameroon Cup winners.

The Championnat du Cameroun de football is the top division of association football in Cameroon, governed by the Cameroonian Football Federation since its establishment in 1961.

Jacques Bertin Nguemaleu is a Cameroonian football defender who plays for TTM Lopburi in the Thai Division 1 League.

Patrick Omer Nyamsi Tobo is a former Cameroon international football defender who played club football in Cameroon and Canada. He works as an assistant for the Canada men's national youth soccer teams. 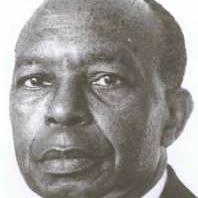 Simon Pierre Tchoungui was a doctor who was appointed Prime Minister of Cameroon from October 1965 until 20 May 1972, when the United Republic of Cameroon came into being.

Charles Léa Eyoum is a Cameroonian retired professional football player and manager. A forward, he competed for the Cameroon national football team at the 1972 African Cup of Nations.

Ambroise Oyongo Bitolo is a Cameroonian professional footballer who plays as a left-back for Montpellier of Ligue 1 and the Cameroon national team.

Cédric Djeugoué is a Cameroonian international footballer who plays for CS Chebba as a centre back.

Union des Mouvements Sportifs de Loum or simply UMS de Loum is a Cameroonian football club based in Loum. They are a member of the Cameroonian Football Federation and Elite One, the topflight football league of Cameroon. Currently the team plays at the Stade de Njombé.

Michael Ngadeu-Ngadjui is a Cameroonian professional footballer who plays for Belgian club Gent and captains the Cameroon national team as a defender.

The Elite Messieurs, also known as Cameroon Basketball League, is the premier basketball league for clubs in Cameroon. The league consist out of eight teams. The defending champions are Condor BC.