Pieter Bleeker (10 July 1819 – 24 January 1878) was a Dutch medical doctor, ichthyologist, and herpetologist. He was famous for the Atlas Ichthyologique des Indes Orientales Néêrlandaises, his monumental work on the fishes of East Asia published between 1862 and 1877.

Bleeker was born on 10 July 1819 in Zaandam. [1] He was employed as a medical officer in the Royal Netherlands East Indies Army from 1842 to 1860, [2] stationed in the Dutch East Indies (now Indonesia). During that time, he did most of his ichthyology work, besides his duties in the army. He acquired many of his specimens from local fishermen, but he also built up an extended network of contacts who would send him specimens from various government outposts throughout the islands. During his time in Indonesia, he collected well over 12,000 specimens, many of which currently reside at the Naturalis Biodiversity Center in Leiden. [3] Bleeker corresponded with Auguste Duméril of Paris. His work in ichthyology and tropical medicine was recognised by two doctorates honoris causa (Leyden University, 1846; Utrecht University, 1849). [2]

After his return to the Netherlands in 1860, he started publishing the Atlas Ichthyologique des Indes Orientales Néêrlandaises, a comprehensive account of his studies done in Indonesia, featuring over 1,500 illustrations. It was published in 36 volumes between 1862 and his death in 1878. [2] Between 1977 and 1983, the Smithsonian republished the work in 10 volumes.

He also worked in herpetology, describing at least 14 species of reptiles, [4] [5] most of them described in Reptilien van Agam. [6]

In 1855, he became correspondent of the Royal Netherlands Academy of Arts and Sciences, department Natuurkunde (then Natural Sciences), and in 1862 a member. [1] In 1856 he was elected correspondent for the Muséum national d'histoire naturelle in Paris. In January 1864 he received a French knighthood of the Légion d'honneur. [2] He was president of the Royal Netherlands Institute of Southeast Asian and Caribbean Studies. [1]

Taxon named in his honor

Fish named after him include:

Taxon described by him

Hemiphyllodactylus is a genus of geckos ranging from India and China southward to Southeast Asia and Oceania. Species of Hemiphyllodactylus are commonly known as half leaf-fingered geckos. Many species are known as dwarf geckos or slender geckos.

Lophocalotes ludekingi, called commonly the crested lizard, is a species of lizard in the family Agamidae. The species is endemic to Sumatra, Indonesia. 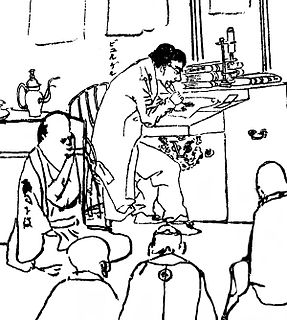 Heinrich Bürger was a German physicist, biologist and botanist employed by the Dutch government, and an entrepreneur. He was important for the study of Japanese fauna and flora.

The Rijksmuseum van Natuurlijke Historie was a museum on the Rapenburg in Leiden, the Netherlands. It was founded in 1820 by Royal Decree from a merger of several existing collections. This happened on the initiative of Coenraad Jacob Temminck, who saw the museum primarily as a research institute for the University of Leiden. The total collection was already quite large at the time, and continued to grow from foreign expeditions and by obtaining private collections from inheritances. The location is currently used by the Rijksmuseum van Oudheden. 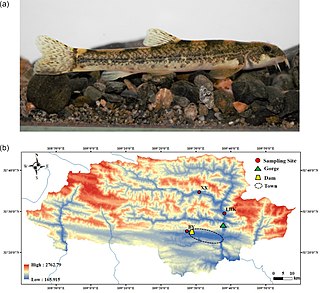 Triplophysa bleekeri is a species of stone loach in the genus Triplophysa. It is endemic to China. It grows to 8.2 cm (3.2 in) TL. Having a wide distribution across the Qinghai-Tibet Plateau, it lives in fast-flowing rivers from 200 to 3,000m in altitude. Being an unusual species inhabiting high-altitude regions, it is an excellent model to investigate the genetic mechanisms of adaptation to the local environment. With this in mind a chromosomal-scale genome assembly was sequenced and assembled with a genome size of ∼628 Mb. This data finding that the Triplophysa genus likely diverged when the Qinghai-Tibet Plateau elevated by >4,000 m roughly 40 million years ago.

Callionymus bleekeri, Bleeker's deepwater dragonet, is a species of dragonet endemic to the Pacific Ocean waters around Indonesia. The specific name honours the Dutch ichthyologist and surgeon Pieter Bleeker (1819-1878). 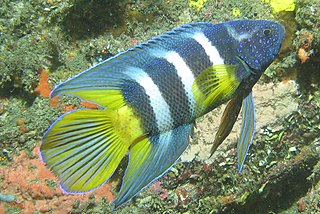 Paraplesiops bleekeri, commonly known as the eastern blue devil, blue-tipped long-fin or Bleeker's blue devil fish, is a species of fish in the family Plesiopidae. This colourful, secretive fish is endemic to Australia, where it is a protected species. 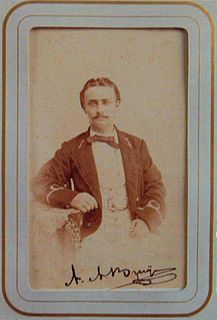 Antonie Augustus Bruijn was a Dutch navy officer, naturalist and trader in naturalia from the Dutch East Indies. He was the son-in-law of Maarten Dirk van Renesse van Duivenbode who from 1858 to 1861 provided lodging and assistance to Alfred Russel Wallace when he traveled through the Mollucan islands.

François Paul Louis Pollen (1842–1886) was a Dutch naturalist and merchant. He made major contributions to the study of the Malagasy fauna.

The lesser thrush eel, also known as the common worm eel and the spaghetti eel, is an eel in the family Moringuidae. It was described by Pieter Bleeker in 1853. It is a tropical, marine eel which is known from East Africa, Samoa, the Ryukyu Islands, and the southern Great Barrier Reef. It typically dwells at a depth range of 3–20 m, with juveniles inhabiting estuaries and rivers, adult females leading a benthic lifestyle in shallow oceanic waters, and adult males living in the pelagic zone. Adults breed offshore. Males can reach a maximum total length of 47 cm.

Frank Gerard Rozendaal was a Dutch ornithologist who in particular did research on the Southeast Asian avifauna. He also contributed to the taxonomy of bats. After field trips in Europe and the Near East he conducted expeditions to South, Southeast and East Asia from 1979 to 1991 where he discovered several new bird, bat and insect taxa.

Priacanthus blochii, the paeony bulleye, is a species of marine ray finned fish, a bigeye in the family Priacanthidae. Other common names for this species include Bloch's bigeye, blotched bigeye, glass-eyebigeye, shortfin bigeye, silver big-eye and goggle eye. 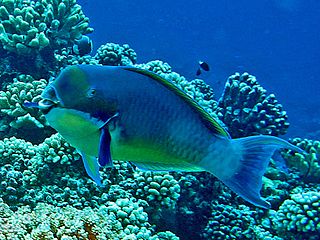 Chlorurus microrhinos, the blunt-head parrotfish or steephead parrotfish, is a species of marine ray-finned fish, a parrotfish from the family Scaridae. It is found in the Indo-Pacific region.

Dotsugobius bleekeri, also known as the dark mangrovegoby, is a species of fish in the family Gobiidae known from brackish estuarine and the adjacent freshwater areas of the eastern Indian Ocean, Andaman Sea and Western Pacific. The generic name honours the Japanese ichthyologist Yoshie Dotsu, whose surname was spelled “Dôtu” in his earlier publications, of Nagasaki University while the specific name honours the Dutch ichthyologist, herpetologist and physician Pieter Bleeker (1819-1878) who was a significant worker on the fish fauna of the Dutch East Indies. This species is placed in the genus Lophogobius by some authorities.

Osteochilus bleekeri is a species of cyprinid fish endemic to Borneo and Sumatra.

Siganus labyrinthodes, the labyrinth spinefoot, is a little known species of marine ray-finned fish, a rabbitfish belonging to the family Siganidae. It is found in the eastern Indian Ocean and western Pacific Ocean.