Pietro Paolo Mennea (Italian pronunciation:  [ˈpjɛːtro menˈnɛːa] ; 28 June 1952 – 21 March 2013), nicknamed la Freccia del Sud ("the Arrow of the South"), was an Italian sprinter and politician. He was most successful in the 200m event, winning a gold medal at the 1980 Moscow Olympics, and set a world record at 19.72 seconds in September 1979. This record stood for almost 17 years – the longest duration in the event history – and is still the European record. [1]

Mennea, who was born in Barletta, started his long international athletic career in 1968 when he took part in a junior race in Termoli and he was registered in AVIS Barletta club; [2] in 1971, he won the first of his 14 Italian outdoor titles in the 100 and 200 m. He went on to win two indoor titles in 60 m and 400 m, along with five Mediterranean Games gold medals in 100 m and 200 m. He competed at the European Championships with a third place in the 4 × 100 m relay. He made his Olympic debut at the 1972 Summer Olympics in Munich, where he made the final of the 200 m, his strongest event. He finished in third place, behind Valeri Borzov and Larry Black. Three more consecutive Olympic 200 metre finals would follow later in his career, the longest run ever in this event.

At the 1974 European Championships, Mennea claimed the 200 m gold in front of his home crowd in Rome, while also placing second behind Borzov in the 100 m and the 4 × 100 m. After some poor performances in the 1976 Olympic season, Mennea decided to skip the Olympics, but when the Italian public protested Mennea went to Montreal. He finished fourth in the 200 m and sixth in the 4 × 100 m relay. [3] In 1977, he finished second in the world cup 200, where a photo finish separated him from Clancy Edwards of the United States. He successfully defended his European 200 m title in 1978 but displayed his capabilities in the 100 metres by also winning that event in Prague.[ citation needed ]

In 1979, Mennea placed first in the 100 metres and second in the 200 m behind Allan Wells of Great Britain in the European Cup. Later in the year, aged 27, he took part in the World University Games, which were held on the high-altitude track of Mexico City. On 12 September 1979, he won the 200 metres with a time of 19.72. [4] His time set a new world record, beating Tommie Smith's time of 19.83 set on the same track in the 1968 Summer Olympics. [4] The record held for almost seventeen years before Michael Johnson broke it at the 1996 U.S. Olympic Trials. [4] As of November 2020, only twelve athletes have recorded a better time over 200 metres than Mennea. His time stands as the current European record. He also held the low-altitude world record, 19.96, from 1980 to 1983, set in his home town of Barletta. [3] On 17 August 1980, Mennea became the first sprinter to break 20 seconds for the 200 metres for the third time.

Entering the 1980 Summer Olympics in Moscow, Mennea was a clear favourite for the Olympic gold, in part because of the United States boycott of the Moscow Olympics. In the 200 metre final, Mennea faced reigning champion Don Quarrie and 100 metre champion Allan Wells. Mennea drew the outer most lane with Wells in lane 7 to his inside. Wells got out to a blistering fast start and closed on Mennea within the first 50 m. They approached the straight with Wells more than a two-metre lead on Mennea with Quarrie in second and Silvio Leonard, hampered by his lane 1 draw, in fourth. However, in the straight Mennea gained ground and passed Quarrie and Leonard and at the very end of the race, just beating Wells, winning the gold by a mere 0.02 seconds. Later in the games, he was the anchor man on the Italian bronze medal winning 4 × 400 relay team. He also competed in the 100 metres, reaching the semi-finals. [3] [5]

In 1983, in Cassino, he clocked a manual 14.8 seconds in 150 metres, a world best time that he held until it was bettered by Usain Bolt in Manchester in 2009. Mennea, known in Italy as the la Freccia del Sud ("the Arrow of the South"), then announced his retirement, allowing himself more time for his studies. However, he came back from retirement soon and won a bronze medal in the 200 m at the inaugural World Championships in Helsinki. A year later, he competed in his fourth consecutive Olympic 200 m final, becoming the first person to do so. The defending champion finished in seventh, and retired from athletics for a second time afterwards. Again, Mennea made a comeback, and competed in his fifth Olympics in Seoul, where he was the flag bearer: he qualified for the quarterfinals of the 200 m, but he decided to withdraw from the competition and did not take part into the next round.

Mennea admitted that he had used human growth hormone once during the last year of his career. In an interview to an Italian newspaper in 1987 he told that in 1984, during the Summer Olympics in Los Angeles, an American physiotherapist proposed a doping treatment to him. Back in Italy he tried two injections of human growth hormone but the crisis of conscience he got was so important that it induced him to retire from activity: "I realized that in my life I was looking for everything, except for that." [6] Although the usage of the substance is banned in modern-day competition, it was not banned at the time by the IAAF. [7]

After his athletic career, Mennea worked as a lawyer and a sports agent. [4] He was a member of the European Parliament from 1999 to 2004 elected on the list of The Democrats, but failed in his attempt to be re-elected. He also lobbied for independent doping testing. [8]

Allan Wipper Wells is a Scottish former track and field sprinter who became the 100 metres Olympic champion at the 1980 Summer Olympics in Moscow. Within a fortnight of that, he also took on and beat America's best sprinters at an invitational meeting in Koblenz. In 1981, Wells was both the IAAF Golden Sprints and IAAF World Cup gold medallist. He is also a three-time European Cup gold medallist among many other sprint successes. 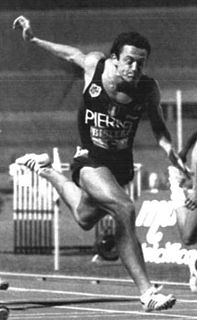 Pierfrancesco Pavoni is a retired sprinter from Italy. 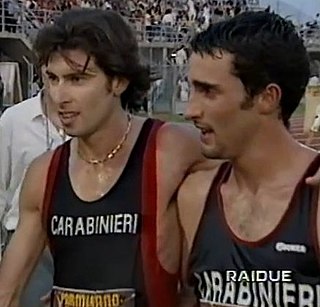 Simone Collio is an Italian sprinter who specializes in the 60 and 100 metres. His personal best times are 6.55 seconds in the 60 metres (indoor) and 10.06 seconds in the 100 metres, the third all-time best performance in the Italian ranking of 100 meters, after the 10.01 at altitude of Pietro Mennea and 9.99 of Filippo Tortu.

Mauro Zuliani is a former Italian sprinter who specialized in the 400 metres.

Stefano Malinverni was an Italian sprinter who specialized in the 400 metres.

The men's 200 metres was an event at the 1980 Summer Olympics in Moscow. The competition was held on July 27, 1980, and on July 28, 1980. There were 57 competitors from 37 nations. The maximum number of athletes per nation had been set at 3 since the 1930 Olympic Congress. The event was won by Pietro Mennea of Italy, the nation's first victory in the event since 1960 and second overall. Great Britain earned its first medal in the men's 200 metres since 1928 with Allan Wells' silver. Don Quarrie of Jamaica, the defending champion, took bronze. Mennea and Quarrie were the fifth and sixth men to earn multiple medals in the event.

Clancy Edwards is a retired track and field sprinter from the United States. He was considered one of the best sprinters in the world between 1974 and 1978. He won the 200 metres at the 1977 IAAF World Cup, the most important meet of that year, defeating future World Record holder Pietro Mennea.

Stefano Tilli is a former Italian sprinter who specialized in the 100 and 200 m, twice European indoor champion, three-time semi-finalist at the Olympic Games, and was the world record holder in the 200m indoor.

Luciano Caravani is a retired Italian sprinter who specialized in the 100 and 200 metres. He was born in Vicenza, Veneto. He won six medals at the International athletics competitions, of these five with the national relay team. 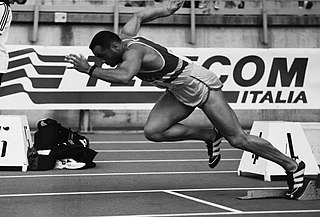 Giovanni "Gianni" Puggioni is a former Italian sprinter who specialized in the 200 metres. 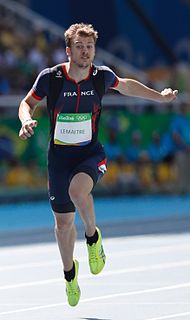 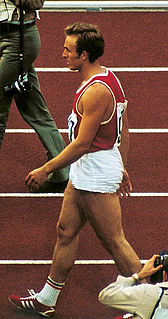 The men's 200 metres was an event at the 1972 Summer Olympics in Munich. The competition was held on 3–4 September. There were 57 competitors from 42 nations. The maximum number of athletes per nation had been set at 3 since the 1930 Olympic Congress. The event was won by Valeriy Borzov of the Soviet Union, the nation's first medal in the event. Larry Black took silver, extending the United States' podium streak in the men's 200 metres to nine Games. Italy earned its first medal in the event since 1960 with Pietro Mennea's bronze. 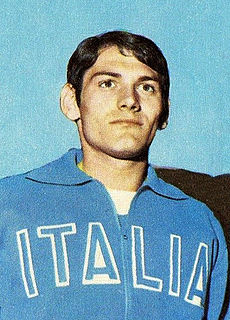 Pasqualino Abeti is an Italian former sprinter who competed in the 1972 Summer Olympics. He was part of the Italian 4 × 100 m relay team that won the gold medal at the 1971 Mediterranean Games. 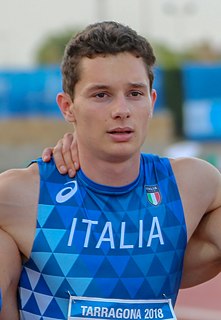 Filippo Tortu is an Italian sprinter with a personal best in the 100 meters of 9.99, the first Italian in history to break the 10 seconds barrier. He won the gold medal in 100 metres at the 2017 European U20 Championships and the silver medal at the 2016 World U20 Championships. He ran the anchor leg in the 4×100m relay of the Italian team that won the gold medal at the 2020 Summer Olympics. He is coached by his father, Salvino Tortu, a former Sardinian sprinter who moved to Lombardy.

Lamont Marcell Jacobs Jr. is an Italian track and field sprinter and long jumper. He is the 2020 Olympic 100 metres champion, the 2022 60 metres world champion, and a member of the gold medal-winning 4 × 100 m relay team at the 2020 Olympics. He currently holds the 100 metres European record, the 60 metres European record, and is the first Italian to ever qualify for and win the men's 100 metres Olympic final. Jacobs is the first 100m Olympic Champion since 1996 to win gold without a recent top 200m mark.

The men's 400 metres event at the 1979 Summer Universiade was held at the Estadio Olimpico Universitario in Mexico City on 8, 9 and 11 September 1979.