Last updated June 24, 2022
1943 film by George Sidney
The correct title of this article is Pilot #5. The substitution of the # is due to technical restrictions.

In May 1942, an Allied base on Java is bombed by Japanese aircraft, with another attack expected the next day. With only one working fighter and five American pilots who all volunteer to fly it, Dutch commander Major Eichel (Steven Geray) chooses George Collins (Franchot Tone) because he has come up with a daring plan: attach a bomb rack to the fighter to bomb the Japanese aircraft carrier from which the attack came. After George takes off, Eichel asks the other pilots to tell him about George. Flashbacks stories of his civilian life before the war are interleaved with radio broadcasts from George.

Four years earlier, George is working his way through law school and is at the top of his class. He takes Freddie Andrews (Marsha Hunt) to an empty lot in the country, where he proposes and tells her that he has bought the land to build their home. She accepts.

At first, they are happy, but then his friend and fellow lawyer Vito S. Alessandro (Gene Kelly) invites him to join his law firm after graduation. Vito's firm works for corrupt state governor Hank Durban. Despite Freddie's concerns, George takes the job. He ends up evicting poor farmers to make way for an irrigation project which will mostly benefit Durban and his cronies.

Meanwhile, Vito's brother Nikola arrives from Italy. A member of the resistance to Benito Mussolini's regime, he had been imprisoned, but finally managed to escape. When he sees a portrait of the Italian dictator hanging in Vito's office, he becomes enraged and tears it down. The prison ordeal has taken its toll on Nikola's health, and he commits suicide.

Freddie finally divorces George because, while she still loves him, she does not like him anymore. Eventually, George becomes sickened when a mentally disabled girl dies accidentally during the eviction of her family. He provides information that brings about the downfall of Governor Durban, but the residents of his town ostracize him, unaware of his pivotal role in the downfall. Freddie, however, knows that he has redeemed himself, and they get back together.

Back in the present, George locates the Japanese carrier and dives on it, but the 500-pound bomb fails to release properly. After shooting down a couple of enemy fighters, George makes a fateful decision and deliberately crashes his fighter into the carrier. The explosion rocks the ship and fires spread rapidly. The carrier's battle ensign, now afire, is the last thing seen as it slips beneath the waves.

The California facilities at Cal-Aero Aviation Training School (formerly Curtiss-Wright Technical Institute) were used for the wartime sequence. A Republic P-43 Lancer was prominently featured as the sole remaining fighter aircraft in Java. [2]

Although a relatively minor production, a great number of MGM players who later achieved fame were used in the film, but their scenes may have been lost in final editing [3] Studio records and casting call lists indicate Hobart Cavanaugh, Jim Davis, Marilyn Maxwell, Marie Windsor and Frances Rafferty as cast members. Ava Gardner has been listed in a modern source as uncredited. [2]

Not given any major promotion and considered a "B" feature on the MGM lot, Pilot #5 was mainly considered a forgettable flagwaver, typical of the WWII period. [4] It was not received favorably by audiences or critics. [5] More recent reviews have noted it provides a historical context, but it mainly remains a curio. [6] Leonard Maltin described the film more favorably, "Good cast uplifts so-so curio; it's intriguing to see Kelly in a supporting part, as a morally bankrupt hothead. Watch for Peter Lawford at the opening, and see if you can spot Ava Gardner. [7] 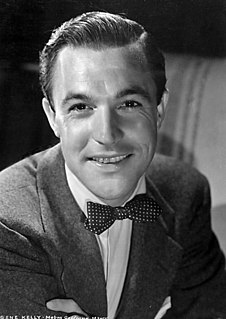 Eugene Curran Kelly was an American actor, dancer, singer, filmmaker, and choreographer. He was known for his energetic and athletic dancing style, his good looks, and the likable characters that he played on screen. He starred in, choreographed, and co-directed with Stanley Donen, some of the most well-regarded musical films of the 1940s and 1950s. 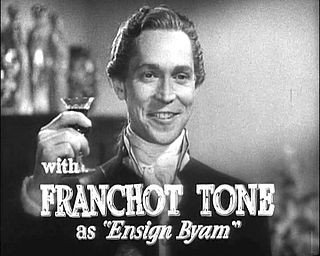 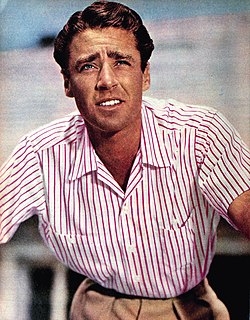 Peter Sydney Ernest Lawford was an English actor. He resided in the United States throughout his adult life. 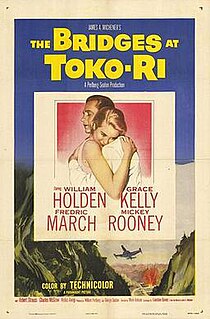 The Bridges at Toko-Ri is a 1954 American war film about the Korean War and stars William Holden, Grace Kelly, Fredric March, Mickey Rooney, and Robert Strauss. The film, which was directed by Mark Robson, was produced by Paramount Pictures. Dennis Weaver and Earl Holliman make early screen appearances in the film.

Matt Braddock, VC and bar, is a fictional World War II bomber pilot who first appeared in prose adventures in the story paper The Rover in 1952, and later as a comic strip in The Victor (1961–83) and Warlord (1974). Some of his stories were published in book form as I Flew With Braddock.

Look Who's Talking Now is a 1993 American romantic comedy film, and the third and final installment in the film series that began with Look Who's Talking in 1989. It finds John Travolta and Kirstie Alley reprising their roles as James and Mollie Ubriacco, respectively, and introducing the newly extended family members to it. 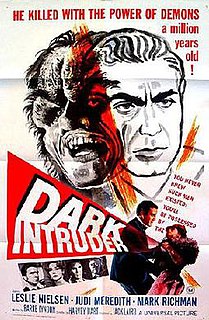 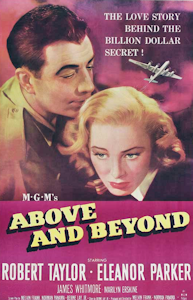 Above and Beyond is a 1952 American World War II film about Lt. Col. Paul W. Tibbets Jr., the pilot of the aircraft that dropped the atomic bomb on Hiroshima in August 1945. 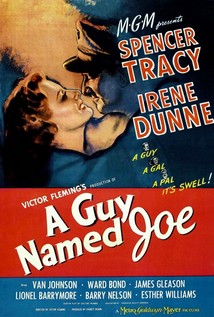 A Guy Named Joe is a 1943 American romantic fantasy drama film directed by Victor Fleming. The film was produced by Everett Riskin, and starred Spencer Tracy, Irene Dunne, and Van Johnson. The screenplay, written by Dalton Trumbo and Frederick Hazlitt Brennan, was adapted from a story by Chandler Sprague and David Boehm, for which they were nominated for an Academy Award for Best Writing, Original Story.

Bombers B-52 is a 1957 Warner Bros. CinemaScope film in WarnerColor, produced by Richard Whorf and directed by Gordon Douglas. The film stars Natalie Wood and Karl Malden, and co-stars Marsha Hunt and Efrem Zimbalist Jr. It was adapted from a Sam Rolfe story by screenwriter Irving Wallace. Leonard Rosenman composed the score. 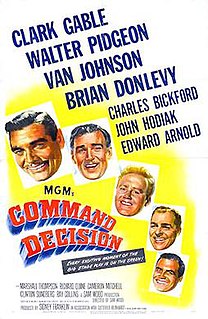 Command Decision is a 1949 war film released by Metro-Goldwyn-Mayer starring Clark Gable, Walter Pidgeon, Van Johnson, and Brian Donlevy, and directed by Sam Wood, based on the 1948 stage play of the same name written by William Wister Haines, which he based on his best-selling 1947 novel. The screenplay for the film was written by George Froeschel and William R. Laidlaw. Haines' play ran on Broadway for almost a year beginning in October 1947. 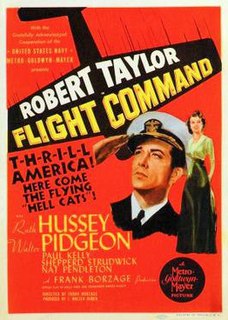 Flight Command is a 1940 American film about a cocky U.S. Navy pilot who has problems with his new squadron and with the wife of his commander. It stars Robert Taylor, Ruth Hussey and Walter Pidgeon. Flight Command has the distinction of often being credited as the first Hollywood film glorifying the American military to be released after the outbreak of World War II in Europe, a year before the U.S. entered the conflict.

Fighter Attack is a 1953 American World War II film directed by Lesley Selander. The film stars Sterling Hayden, Joy Page and J. Carrol Naish. It reunited Hayden and Selander; they had worked together on the film Flat Top (1952). The film is set in Nazi-occupied Italy and involves a U.S. fighter pilot's last sortie, and the help he receives from Italian partisans in an effort to complete it after he is shot down in enemy territory.