Giuseppe "Pino" Puglisi (Italian pronunciation:  [ˈpiːno puʎˈʎiːzi] , Sicilian:  [pʊɟˈɟiːsɪ] ; 15 September 1937 – 15 September 1993) was a Roman Catholic priest in the rough Palermo neighbourhood of Brancaccio. He openly challenged the Mafia who controlled the neighbourhood, and was killed by them on his 56th birthday. His life story has been retold in a book, Pino Puglisi, il prete che fece tremare la mafia con un sorriso (2013), and portrayed in a film, Come Into the Light ("Alla luce del sole" original Italian title) (2005). He is the first person to be killed by the Mafia who was declared Blessed by the Catholic Church. [1]

Puglisi was born in Brancaccio, a working-class neighbourhood in Palermo (Sicily), into a family of modest means. His father was a shoemaker and his mother a dressmaker. He entered the seminary at age sixteen. Following ordination, he worked in various parishes, including a country parish afflicted by a bloody vendetta. [2]

Puglisi was ordained as a priest on 2 July 1960 by Cardinal Ernesto Ruffini from Palermo. Ruffini regarded Communism as a greater threat than the Mafia. He once questioned the Mafia's very existence. To a journalist's question of "What is the Mafia?" he responded: "So far as I know, it could be a brand of detergent." [3] This denial persuaded Puglisi of the need to challenge church authorities. "We can, we must criticize the church when we feel it doesn't respond to our expectations, because it's absolutely right to seek to improve it," he said. With his trademark humour, Puglisi added: "But we should always criticize it like a mother, never a mother-in-law!" [3]

In 1990, Puglisi returned to his old quarter Brancaccio and became the priest of San Gaetano's Parish. He spoke out against the Mafia who controlled the area and opened a shelter for underprivileged children. Puglisi had been offered other parishes by the local curia, in less troublesome Palermo neighborhoods, but he opted for San Gaetano. [4]

With little support from the Palermo archdiocese, Puglisi tried to change his parishioners' mentality, which was conditioned by fear, passivity and word omertà – imposed silence. In his sermons, he pleaded to give leads to authorities about the Mafia's illicit activities in Brancaccio, even if they could not actually name names. [4] He refused their monies when offered for the traditional feast day celebrations, and would not allow the Mafia "men of honour" to march at the head of religious processions. [2]

He tried to discourage the children from dropping out of school, robbing, drug dealing and selling contraband cigarettes. He ignored a series of warnings and declined to award a contract to a construction firm which had been "indicated" to him by the Mafia for the restoration of the church, where the roof was collapsing. [5] Those parishioners that made attempts to reform matters were sent strong messages. A small group who organized for social improvement found the doors of their houses torched, their phones receiving threats, and their families put on notice that worse things lay in store. [2]

On 15 September 1993 – Puglisi's 56th birthday – he was killed outside his home by a single bullet shot at point-blank range. He was taken unconscious to a local hospital, where surgeons could not revive him. [6] The murder was ordered by the local Mafia bosses, the brothers Filippo and Giuseppe Graviano. [7] One of the hitmen who killed Puglisi, Salvatore Grigoli, later confessed and revealed the priest’s last words as his killers approached: "I've been expecting you." [3]

Puglisi's murder shocked Italy. There was an immediate call by eight priests in Palermo for the pope to travel to Palermo to be present at his funeral. Pope John Paul II, however, was scheduled to be in Tuscany on that date and did not attend the memorial service. At the funeral Mass the archbishop of Palermo, Cardinal Salvatore Pappalardo, spoke out very strongly against the Mafia, echoing the Pope's words on a visit to Agrigento, Sicily, just months earlier. [8]

During his visit to Sicily in November 1994, Pope John Paul II praised Puglisi as a "courageous exponent of the Gospel." [5] He urged Sicilians not to allow the priest’s death to have been in vain and warned that silence and passivity about the Mafia was tantamount to complicity. [5]

Puglisi's favorite rhetorical stance – "Se ognuno fa qualcosa, allora si può fare molto" (If everyone does something, then we can do a lot) [10] – is scrawled on walls in Brancaccio. In 1999, the Cardinal of Palermo started his beatification process, proclaiming Puglisi a Servant of God. [3]

To underscore this anti-Mafia conviction, he composed a parody of the Our Father in the Sicilian language:

O godfather to me and my family, You are a man of honor and worth. Your name must be respected. Everyone must obey you. Everyone must do what you say for this is the law of those who do not wish to die. You give us bread, work; who wrongs you, pays. Do not pardon; it is an infamy. Those who speak are spies. I put my trust in you, godfather. Free me from the police and the law. [2]

On 28 June 2012, Pope Benedict XVI allowed the Vatican Congregation for the Causes of Saints to designate Puglisi a martyr in a first step to beatify the slain priest. [11] The Pope signed a decree acknowledging that Father Puglisi had been killed "in hatred of the faith", meaning that he can be beatified – the last step before sainthood – without a miracle being attributed to his intercession with God. [12]

The Beatification of Pino Puglisi took place on 25 May 2013. [13] The open-air Mass took place at the Foro Italico 'Umberto I', a large green area that forms one of the promenades of Palermo. The Mass was presided over by Paolo Cardinal Romeo, Metropolitan Archbishop of Palermo, with Salvatore Cardinal de Giorgi, Metropolitan Archbishop Emeritus of Palermo, as the Papal Legate who performed the Rite of Beatification. Estimates state that 50,000 people attended the Mass. [14] During his Angelus address, the following Sunday, 26 May, Pope Francis stated that the newly beatified Puglisi was first and foremost "an exemplary priest and a martyr", as well as condemning mafia groups. [15] 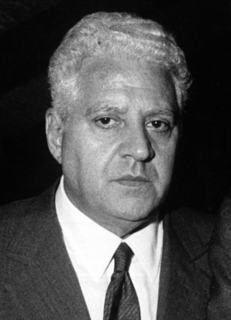 Salvatore Achille Ettore Lima was an Italian politician from Sicily who was associated with, and murdered by, the Sicilian Mafia. He is often just referred to as Salvo Lima.

Salvatore De Giorgi is an Italian prelate of the Catholic Church who was Archbishop of Palermo from 1996 until his retirement in 2006. He was made a cardinal in 1998. He was first made a bishop in 1973 and led other dioceses in his native Apulia from 1978 to 1990.

Brancaccio is a neighbourhood in the municipality of Palermo, Sicily, in Italy. It is a semi-traditional area of the working class. It was important in the history of the Cosa Nostra. 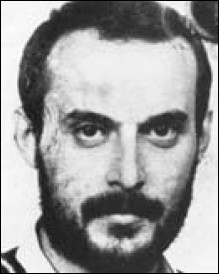 Filippo Marchese was a leading figure in the Sicilian Mafia and a hitman suspected of dozens of homicides. Marchese was one of the most feared killers working for mafia boss Vincenzo Chiaracane, closely related to the Giuseppe Greco family which was in control of the Ciaculli neighbourhood of Palermo.

Antonino "Nino" Giuffrè is an Italian mafioso from Caccamo in the Province of Palermo, Sicily. He became one of the most important Mafia turncoats after his arrest in April 2002. 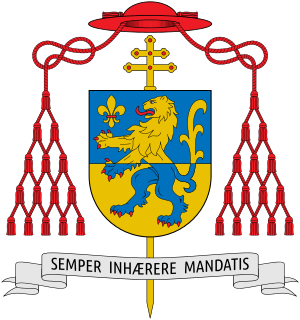 Salvatore Pappalardo was an Italian Cardinal of the Roman Catholic Church who was Archbishop of Palermo for over 25 years, from 1970 to 1996. He was the first senior clergyman from Sicily to speak out against the Mafia, breaking its code of omertà.

Ernesto Ruffini was an Italian Cardinal of the Catholic Church who served as Archbishop of Palermo from 1945 until his death, and was elevated to the cardinalate in 1946 by Pope Pius XII. 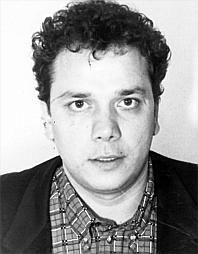 Giuseppe Graviano is an Italian mafioso from the Brancaccio quarter in Palermo. He is currently serving several life sentences.

Francesco Spoto was an Italian Roman Catholic priest who served in the missions in the Democratic Republic of Congo and was killed there. He was also a professed member from the Missionary Servants of the Poor.

The Greco Mafia family is a historic and one of the most influential Mafia clans in Sicily and Calabria, from the late 19th century. The extended family ruled both in Ciaculli and Croceverde Giardini, two south-eastern outskirts of Palermo in the citrus growing area and also rural areas of Calabria where they controlled the olive oil market. Members of the family were important figures in the Sicilian Cosa Nostra and Calabrian 'Ndrangheta. Salvatore "Ciaschiteddu" Greco was the first ‘secretary’ of the Sicilian Mafia Commission, while Michele Greco, also known as The Pope, was one of his successors.

The martyrs of the Spanish Civil War are the Catholic Church's term for the people killed by Republicans during the Spanish Civil War for their faith. More than 6,800 clergy and religious were killed in the Red Terror. As of November 2020, 1,916 Spanish martyrs have been beatified; 11 of them being canonized. For some 2,000 additional martyrs, the beatification process is underway.

Giuseppe Guttadauro is an Italian Mafia boss and a high-profile surgeon from the Rocella neighbourhood in Palermo. Born in Bagheria, he became the regent of the Brancaccio mandamento after the arrest and subsequent incarceration of the Mafia boss Gaspare Spatuzza in 1998.

Rosario Angelo Livatino was an Italian magistrate who was killed by Stidda.

Pietro Tagliavia is a member of the Sicilian Mafia. Despite his young age, he is considered to be one of the upcoming leading Mafiosi of Cosa Nostra in Palermo. 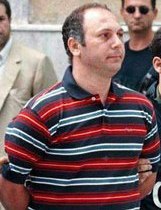 Gaspare Spatuzza is a Sicilian mafioso from the Brancaccio quarter in Palermo. He was an assassin for the brothers Filippo and Giuseppe Graviano who headed the Mafia family of Brancaccio. After the arrest of the Gravianos in January 1994, he apparently succeeded them as the regent of the Mafia family. He was arrested in 1997 and started to cooperate with the judicial authorities in 2008. In his testimony he claimed that media tycoon and prime minister Silvio Berlusconi made a deal with the Sicilian Mafia in 1993 that put the country "in the hands" of Cosa Nostra. 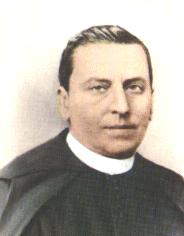 Giacomo Cusmano was an Italian Roman Catholic priest and the founder of the "Congregatio Missionariorum Servorum Pauperum" which is also known as the "Boccone del Povero". Cusmano also established the Sisters Servants of the Poor. He was beatified by Pope John Paul II on 30 October 1983. 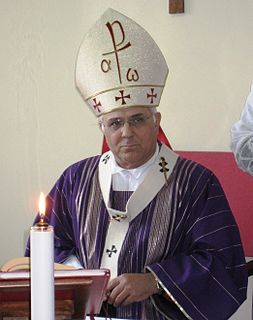 Vincenzo Bertolone S.d.P. is an Italian Roman Catholic bishop, being the archbishop of the Archdiocese of Catanzaro-Squillace since 2011. He was previously the bishop of the Diocese of Cassano all'Jonio. He is also a writer who has written and published books on the topics of faith.