Pionerskaya Pravda (Пионе́рская Пра́вда) is an all-Russian newspaper. Initially it was an all-Union newspaper of the Soviet Union. Its name may be translated as "Truth for Young Pioneers".

The newspaper was founded March 6, 1925 in Moscow and published under the name “School Pravda” and later under “Pioneer Truth”. [1] [2] Nikolai Bukharin was the first editor of the newspaper. Different poets and artists, like Mikhail Zoshchenko, Ilya Ilf, Evgeny Petrov and Vladimir Mayakovsky, cooperated with the newspaper. [3]

The newspaper became a weekly printed body of the Moscow RKSM Committee. In the 1970s and 1980s its circulation approached 10,000,000 (almost every child in the Soviet Union had a subscription). Its title followed the name of the main Soviet newspaper of the time, Pravda , as did multiple other newspapers.

The newspaper continues to exist today, but now it is not associated with Young Pioneers, and the circulation is greatly reduced.

Panteleimon Kondratyevich Ponomarenko was one of the leaders of Soviet partisan resistance in Belarus. He also served as an administrator at various positions within the Soviet government, including the leadership positions in Byelorussian and Kazakh SSRs.

Mikhail Ivanovich Kononov was a Soviet and Russian actor. People's Artist of Russia (1999).

Vorona is the second studio album by the Russian ethno-rock singer Linda, released in 1996. The album has sold 1.5 million copies and took 3rd place in top best-selling albums in Russia in 1997."Vorona" had a great influence on popular culture and music of Russia. Music critics noted that the album became the top in the music career both of Linda and Maxim Fadeev.In November 2010 the album was included in the list of "50 best Russian albums of all time. Selection of young musicians" by the Afisha magazine.

Rinat Akhmedovich Shamsutdinov , is a Russian rugby league footballer, Master of Sports of Russia and rugby union coach. He was presented with Excellence in physical culture and sports of the Republic of Tatarstan. 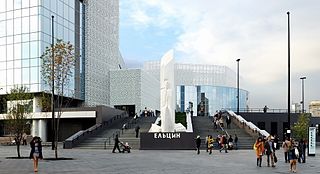 Boris Yeltsin Presidential Center, also known simply as the Yeltsin Center is a social, cultural and educational center, which opened in Yekaterinburg in 2015. The architect of the project is Boris Bernaskoni, the founder of BERNASKONI interdisciplinary bureau that works on intersection of architecture, communication, art and industrial design.

AUE is an informal, well hidden, and vaguely defined organization of Russian criminals, mainly consisting of children and teenagers, who are often indirectly ruled by adult criminals.

Vadim Viktorovich Demchog is a Russian theater and film actor, candidate of psychological sciences, teacher, creator of author projects on radio, television, the Internet and in the theater. He gained fame as a host of Frankie Show on the Silver Rain Radio. The author of more than three hundred scenarios. He is the author of five books, the creator of the concept of Self-liberating Game, which unites the theory and practice of the world theater with transpersonal psychology. Currently he directs the theatrical project Harlequinada. The most famous role of the venereologist Kupitman in the comedy series Interns. Also Vadim Demchog became the voice of the character of the animated web series Mr. Freeman. Permanent speaker of the Summer Campus of the Presidential Academy in Tatarstan.

The Fighters, is a 1939 Soviet drama film directed by Eduard Pentslin.

Vladimir Sergeevich Zhukov (born June 20, 1972 in RSFSR), known as the "Nizhegorodsky Chikatilo", is a Russian serial killer, rapist and pedophile.

Marina (Marianna) Pavlovna Basmanova is a Russian artist and book illustrator based in St. Petersburg.

Ashram Shambala is a Russian sect founded in Novosibirsk in 1989 by Konstantin Rudnev. It is a mixture of occult and esoteric teachings. The cult consisted of approximately 20,000 followers. Since 1990, sect branches operated in 18 regions of Russia and also in Moscow and St. Petersburg. 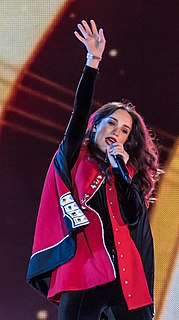 Victoria Dayneko is a singer, songwriter, and actress. In 2004, she started her career in Russia after her victory at the Star Factory-5 All-Russian TV show. Dayneko's songs have topped the Russian charts, and the music video of the "Bei Sebia" song has garnered more than 30 million YouTube views. Dayneko has also won Russian music award Golden Gramophone several times. She was declared as a Singer of the Year by Russian Glamour magazine and by Russian Fashion TV. She has appeared on the Russian Playboy magazine cover three times.

The Heirs is a 2008 Russian drama film directed by Konstantin Odegov.

Ilia Serhiyovych Novikov is a Russian and Ukrainian lawyer. He defended famous political prisoners in Russia such as Nadiya Savchenko, Mykola Karpyuk, Oyub Titiev and Yegor Zhukov. In 2019, Novikov became a defence lawyer of the 5th President of Ukraine Petro Poroshenko.