Pisanhari ki Marhia is a Jain temple built in the 15th century and located in the city of Jabalpur in Madhya Pradesh, India. The temple is named after its creator, a local woman who, according to legend, paid for the construction of the temple with the money she saved from milling flour.

The temple was built in 1442 CE. The name derives from the word "pisanhari", meaning a woman engaged in the work of manual milling of flour. [1] According to legend, Pisanhari was a poor woman who saved enough money from milling flour to construct the temple. [2] [3] A statue of Pisanhari is at the temple's entrance, and the quern stones are still kept on top of the entrance gate of the marhia. [4]

The temple complex includes inscriptions. Though they have not yet been deciphered, they are believed to be from the 14th century. [4]

The Pisanhari ki Marhia temples is a complex of 13 smaller temples including the Samavsaran Mandir, the Manastambha, the Bhagwan Bahubali statue, and the Shri Nandishwar Dweep Jinalaya, among others. [5] Nandishwar Dweep Jinalya is the largest Jain temple in the foothills with an area of 15,000 square feet (1,400 m2). The roof of the temple is built in vault fashion, and includes a mandapa (pillared hall) and a two-story garbhagriha (inner sanctuary). The temple houses 152 marble idols of Tirthankara seated in small shrines. The temple is famous for its artwork. [6] The temple features a 55-foot (17 m) idol of Bahubali. [4]

The temple complex covers 18 acres (73,000 m2) and includes a Gurukula —Brahmi Vidyashram, a girls' hostel, a dharmshala (rest house), and a Bhojnalaya (restaurant). [7]

Kundalpur is a town located in the Indian state of Madhya Pradesh, 35 km from the city of Damoh. It is a historical pilgrimage site for Jains in India.

Chhata is a town and a nagar panchayat in Mathura district in the state of Uttar Pradesh, India. Earlier this town was known as Chhatravan.

Avinash Rai Khanna is a Vice Chairman, Indian Red Cross Society and Vice President of Bhartiya Janta Party. He is also a BJP In-charge of Himacal Pradesh Earlier, he served as Ex member of Rajya Sabha and was also a member of the 14th Lok Sabha of India. He represented the Hoshiarpur constituency of Punjab. He was elected as an MLA from Garshankar in 2002. In 2003, he was also elected as a State President B.J.P Punjab. After that he was elected Member of Parliament from Hoshiarpur Constituency in 2004. Under his leadership, first time in Punjab B.J.P. got 19 seats out of 23 in Assembly elections in 2007 and played a major role in formation of Akali government in Punjab. During his five-year tenure as an M.P., he has asked 270 questions and participated in 116 debates.

Jabalpur Engineering College (JEC) is an institute located in Jabalpur, Madhya Pradesh, India. It is the oldest technical institution in central India and the 15th-oldest in India. It is the first institute of India to have started the Electronics & Telecommunication engineering education in the country, and also the last educational institution to be set up by the British in India. The Government of Madhya Pradesh is converting it into Technical University.

Richa Sony is an Indian television actress. She made her debut in Shararat. She is known for her role of Bindiya in the ColorTV's daily soap Bhagyavidhaata . She has also appeared in shows like, Nachle Ve With Saroj Khan - Season 2, Badalte Rishton Ki Dastaan, Jaat Ki Jugni and Siya Ke Ram. She has also done short films like The Silent Statue (showcased in Cannes Film Festival and she also won the Award for "Best Actress in the Short Films Category" in the 2nd Jharkhand International Film Festival 2019. The web series Seasoned with Love premiered on Hungama Play on 16 April 2019. 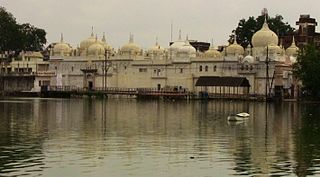 Bara Mandir is a historic Jain temple in Jabalpur, right on the edge of Hanumantal, once the main center of Jabalpur. 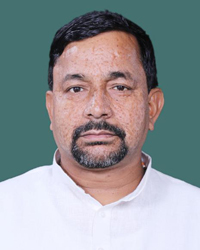 Mukesh Rajput is an Indian politician and a second time elected Member of the Pariliament of India in 17thLok Sabha, representing the Farrukhabad constituency. Prior to this he was elected to 16th Lok Sabha (2014-2019) from the same constituency. He belongs to Bhartiya Janata Party.

The New Narmada Bridge is an extra dosed bridge, constructed at Bharuch, India. It is a 1,344 m (4,409 ft) long bridge, built over river Narmada on NH-8. The four-lane bridge is a part of larger project involving six laning of a section of NH-8 between Vadodara and Surat. It runs parallel to Sardar Bridge. It is the extradosed bridge with the longest spans in India, 144 m (472 ft) long.

The Bhrigu Superfast Express is a Superfast train belonging to Northern Railway Zone that runs between Ballia and Anand Vihar Terminal in India. It is currently being operated with 22427/22428 Train numbers on a weekly basis.

Rana Hamir Singh is the 26th Rana of Amarkot and a Pakistani politician who has been member of Provincial Assembly of Sindh. He is the one of the 5 children of Rana Chandra Singh. He is the current crown Rajput Ruler of Umerkot and is also titled as 'Rana Saheb'.

Acharya Shri Vishuddh sagar ji Maharaj is one of the best-known modern Digambara Jain Acharya. At the age of sixteen, Acharya Vishuddh Sagar Ji. Kshullaka Yashodhar ji on 11 October 1989 in Bhind. He became Muni Vishuddh Sagar on 21 November 1991 at Shreyansgiri (M.P.) He attained the rank of Acharya on 31 March 2007 at Aurangabad (Maharashtra).

Purnima Nirj Singh is a Member of the Jharkhand Legislative Assembly from the Jharia constituency in Dhanbad district. She was married to late Niraj Singh, the ex-Deputy of Dhanbad.

Dinesh Prasad is an Indian politician from Bihar. He was the member of the Bihar Legislative Assembly from Minapur Muzaffarpur 3 times. From 2008 to 2010 he also served as Bihar's irrigation minister.

Bhawana Jha is an Indian politician and was the former member of Bihar Legislative Assembly from Benipatti. In the 2015 Bihar Assembly Election, she contested from Benipatti, Madhubani district and defeated senior BJP leader Vinod Narayan Jha.

N.P. Choudhary was an Indian politician and member of the Indian National Congress party. He represented Patan. He also served as a Rajya Sabha member continuously from 1968 to 1980 represented Madhya Pradesh State. Served as a Mayor in Jabalpur Nagar Nigam.

Bhanwar Singh Samaur is an Indian writer, poet, historian, and social worker from Rajasthan. Samaur is the recipient of the Sahitya Akademi Award 2020 for his work Sanskriti ri Sanatana Deeth. His career has spanned more than 50 years including works on history, literature, and poetry in Rajasthani as well as Hindi. Dr. Samaur is a retired Hindi Lecturer from Lohia Postgraduate College, Churu.