Plastic Omnium is a French automotive supplier specialised in the manufacturing and commercialisation of plastics. [1] [2]

Plastic Omnium was founded by Pierre Burelle in 1946. It began making plastic steering columns for Renault, but soon extended its supply contracts to other carmakers in France and abroad. [3] In 1995, it made a tender offer for its most important rival in the French industry, Reydel, and then acquired it from its major stakeholder Compagnie Financière de Turenne. [4] [5] According to their website, Plastic Omnium currently has 131 plants and is present in 26 countries. [6]

Fiberglass, or fibreglass is a common type of fiber-reinforced plastic using glass fiber. The fibers may be randomly arranged, flattened into a sheet, or woven into a fabric. The plastic matrix may be a thermoset polymer matrix—most often based on thermosetting polymers such as epoxy, polyester resin, or vinylester—or a thermoplastic. 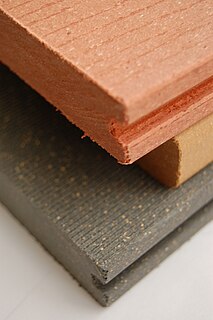 Wood-plastic composites (WPCs) are composite materials made of wood fiber/wood flour and thermoplastic(s) such as PE, PP, PVC, or PLA.

Continental AG, commonly known as Continental or colloquially as Conti, is a German multinational automotive parts manufacturing company specializing in brake systems, interior electronics, automotive safety, powertrain and chassis components, tachographs, tires and other parts for the automotive and transportation industries. It is headquartered in Hanover, Lower Saxony. Continental is the world's fourth-largest tire manufacturer.

Plastic recycling is the process of recovering scrap or waste plastic and reprocessing the material into useful products. Due to purposefully misleading symbols on plastic packaging and numerous technical hurdles, less than 10% of plastic has ever been recycled. Compared with the lucrative recycling of metal, and similar to the low value of glass recycling, plastic polymers recycling is often more challenging because of low density and low value. 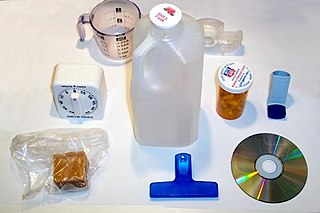 Plastics are a wide range of synthetic or semi-synthetic materials, that use polymers as a main ingredient. The plasticity during production makes it possible for plastic to be moulded, extruded or pressed into solid objects of various shapes, making it an adaptable material for many different uses. This adaptability, plus a wide range of beneficial properties, such as being light weight, durable and flexible, alongside cheap production processes has led to widespread adoption in contemporary society. Plastics typically are made through human industrial systems. Most modern plastics are derived from fossil fuel based petrochemicals like natural gas or petroleum; however, recent industrial methods use variants made from renewable materials such as derivatives of corn or cotton.

TI Fluid Systems is a British multinational company which develops, manufactures and supplies automotive fluid storage, carrying and delivery systems. The company serves the automotive aftermarket through Bundy, Walbro and Marwal brands. The company's headquarters are located in Oxford, England, with Corporate Offices based in Auburn Hills, Michigan, U.S. It is listed on the London Stock Exchange and is a constituent of the FTSE 250 Index.

Merrick Machine Company is a U.S. manufacturer based out of Alda Nebraska that produces custom automated housing machinery, The Auto Dolly, and The Auto Dolly accessory products, Merrick Originals. Merrick Machine Co was the founding business under the parent name of Triad, which now includes five other companies, all owned by the Merrick family. These companies are structured as limited partnerships and include Triad Fastener, Denver Plastics Nebraska, Merrick Machine Company, Fu-Tek Tool, and Triad Products. Each business is a stand-alone company doing business in separate facilities with independent offices, manufacturing, and warehousing.

Tricel is a global engineering company headquartered in Killarney in County Kerry, Ireland. Tricel's four core divisions are Water Storage, Environmental, Construction and Materials. It has production sites in 5 locations in Northern Europe including Ireland, Britain and France, which services customers in over 50 countries. Tricel currently employs 465 people and exports 75% of its products worldwide.

Burelle is a French holding company headquartered in Paris. Its most important subsidiary is Plastic Omnium.

ANAND Group is an Automotive Industry company, with headquarters in Delhi, India. It manufactures as well as supplies automotive systems and components.

UBQ Materials is a cleantech company that converts household and municipal waste into bio-based thermoplastic composite for reuse in the manufacturing of substitute plastics and durable products. The company is an Israeli start-up founded by Rabbi Yehuda Pearl, who also founded hummus brand Sabra and Jack (Tato) Bigio, CEO of UBQ Materials Israel. It is a Certified B Corporation. In March 2020, the company named Mike Thaman, former chairman and chief executive officer of Owens Corning, as its chief executive officer.

In Germany and Austria, the term yellow bag refers to a thin, yellowish transparent plastic bag, in which, in the context of local waste disposal, any waste made of plastic, metal or composite materials can be handed in. Depending on the agreement with the cities and municipalities, it may also be possible to use a 'yellow bin'. Yellow bags or yellow bins are part of the Dual System in the German waste management industry.