Plateau Creek is a tributary of the Colorado River, approximately 50 miles (80 km) long, [2] located in western Colorado in the United States. It drains a cattle ranching valley, known as Plateau Valley, north of the Grand Mesa and east of Grand Junction. 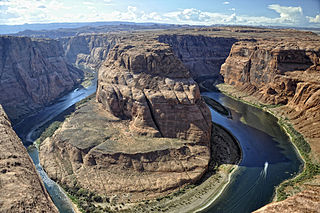 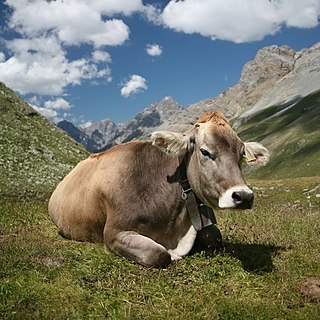 It rises in northeastern Mesa County, in the Grand Mesa National Forest and descends through a narrow canyon to the northwest, passing north of Vega State Park. It enters the Plateau Valley at Collbran, the largest community in the valley. It flows generally west along the north edge of the Grand Mesa uplands, past Molina. State Highway 330 follows the creek through the valley, crossing it several times. Near the junction of State Highway 330 and State Highway 65 it enters a narrow canyon for the lower 8 miles (13 km), followed by State Highway 65. It joins the Colorado from the east in De Beque Canyon approximately 15 miles (24 km) east of Grand Junction. 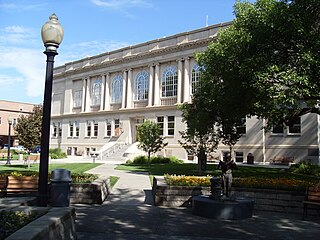 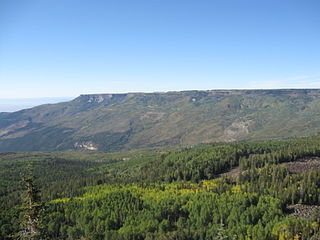 Vega State Park is a 1,823-acre (738 ha) Colorado state park in Mesa County, Colorado in the United States. Vega Reservoir is a fishing destination and is located at an elevation of 7,696 feet (2,346 m). Year-round recreational activities at Vega State Park include boating, hiking, snow mobiling and camping. The park was established in 1967 in cooperation with the Bureau of Reclamation which was responsible for the construction of Vega Dam and Vega Reservoir. 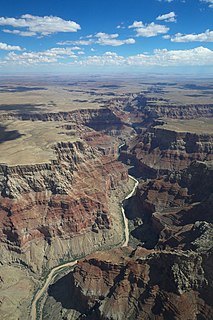 The San Rafael River is a tributary of the Green River, approximately 90 miles (140 km) long, in east central Utah, United States. The river flows across a sparsely populated arid region of the Colorado Plateau, and is known for the isolated, scenic gorge through which it flows.

The Swan River is a short tributary of the Blue River, approximately 10 miles (16 km) long, located in the Rocky Mountains of central Colorado in the United States. The river drains a mountainous area in the upper basin of the Blue River in southern Summit County. It rises in three short forks along the continental divide in the Arapaho National Forest east of Breckenridge. It descends through a narrow valley to the west, joining the Blue from the east approximately 5 miles (8 km) north Breckenridge, along State Highway 9 between Breckenridge and Frisco. The valley of the river was historical site of mining camps during the late 19th century, with many remains of early camps and mine tailings remaining along the canyon walls. 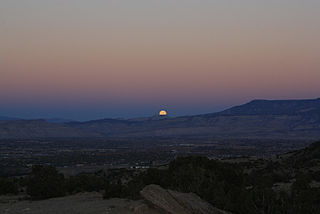 The Grand Valley is an extended populated valley, approximately 30 miles (48 km) long and 5 miles (8.0 km) wide, located along the Colorado River in Mesa County in western Colorado and Grand County in eastern Utah in the Western United States. The valley contains the city of Grand Junction, as well as other smaller communities such as Fruita, and Palisade. The valley is noted as a major fruit-growing region, with a large number of orchards. It takes its name from the "Grand River", the historical name of the Colorado River upstream from its confluence with the Green River that was used by locals in the late 19th and early 20th century. The valley is the most densely populated area on the Colorado Western Slope, with Grand Junction serving as an unofficial capital of the region, as a counterpoint to Denver on the eastern slope of the Rocky Mountains in the Colorado Front Range. Interstate 70 and U.S. Highway 6 run through the valley from west-to-east. The Grand Valley is part of the larger Colorado Plateau desert lands. 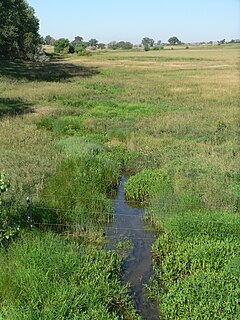 Lodgepole Creek is a tributary of the South Platte River, approximately 278 miles (447 km) long, in the U.S. states of Wyoming, Nebraska and Colorado. Lodgepole Creek drains a basin in the interior of a low plateau which lies between the South Platte Basin and the North Platte Basin in the southeastern corner of Wyoming, the southern edge of the Nebraska Panhandle and several small portions of northeastern Colorado. As its name implies, Lodgepole Creek is a very small stream; for nearly all of its length it flows through the semiarid High Plains. The Lodgepole Creek Valley has been a major transportation route for over 100 years; the line of the original transcontinental railroad, the Lincoln Highway/U.S. Highway 30 and Interstate 80 all run along the stream for much of its length.

U.S. Route 50 (US 50) is a part of the U.S. Highway System that travels from West Sacramento, California, to Ocean City, Maryland. In the U.S. state of Colorado, US 50 is a major highway crossing through the lower midsection of the state. It connects the Western Slope with the lower Front Range and the Arkansas Valley. The highway serves the areas of Pueblo and Grand Junction as well as many other smaller areas along its corridor. The long term project to upgrade the highway from two lanes to a four lane expressway between Grand Junction and Montrose was completed in January 2005. Only about 25% of the remainder of highway 50 in Colorado is four lane expressway.

The South Fork Kern River is a tributary of the Kern River in the Sierra Nevada of the U.S. state of California. It is one of the southernmost rivers on the western slope of the mountains, and drains a high, relatively dry plateau country of 982 square miles (2,540 km2) along the Sierra Crest. The upper South Fork flows through a series of rugged canyons, but it also drains a flat, marshy valley before joining the Kern River at Lake Isabella.

The Middle Fork Kings River is a 37.2-mile (59.9 km) tributary of the Kings River in Kings Canyon National Park, California, in the southern Sierra Nevada. Draining 318 square miles (820 km2) – almost all of it wilderness – the Middle Fork is one of the largest wholly undeveloped watersheds in the state, with no dams or paved roads within its basin. The entire length of the Middle Fork is designated a National Wild and Scenic River. 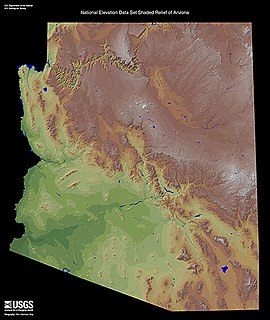 The Peacock Mountains are a small, 26-mi (42 km) long mountain range in northwest Arizona, USA. The range is a narrow sub-range, and an extension north, at the northeast of the Hualapai Mountains massif, which lies to the southwest. The range is defined by the Hualapai Valley to the northwest, and north and south-flowing washes on its east border, associated with faults and cliffs; the Cottonwood Cliffs are due east, and are connected to the Aquarius Cliffs southward at the west perimeter of the Aquarius Mountains; the cliffs are a result of the Aquarius Fault, which is an extension southward from the Grand Wash Cliffs and Grand Wash Fault which crosses the Colorado River at Lake Mead, and the west perimeter of the Grand Canyon/Colorado Plateau. 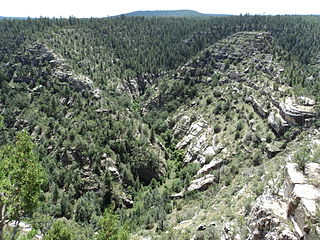 Walnut Creek is a major stream in Coconino County, Arizona that is part of the Little Colorado River drainage basin. The creek flows about 34 miles (55 km) in a northeasterly direction from south of Flagstaff to near Winona.

The West Salt Creek landslide occurred on the evening of May 25, 2014 near Collbran, Colorado, along the north side of the Grand Mesa, about 30 miles (48 km) east of Grand Junction. It was the largest landslide in Colorado's history.