The Pluralist school was a school of pre-Socratic philosophers who attempted to reconcile Parmenides' rejection of change with the apparently changing world of sense experience. [1] The school consisted of Anaxagoras, Archelaus, and Empedocles. It can also be said to have included the Atomists, Leucippus and Democritus. The Pluralists rejected the idea that the diversity of nature can be reduced to a single principle (monism). Anaxagoras posited that nature contained an innumerable number of principles, while Empedocles reduced nature to four elements (fire, air, earth, and water) which could not be reduced to one another and which would be sufficient to explain change and diversity. 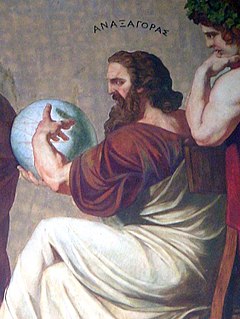 Anaxagoras was a Pre-Socratic Greek philosopher. Born in Clazomenae at a time when Asia Minor was under the control of the Persian Empire, Anaxagoras came to Athens. According to Diogenes Laërtius and Plutarch, in later life he was charged with impiety and went into exile in Lampsacus; the charges may have been political, owing to his association with Pericles, if they were not fabricated by later ancient biographers. 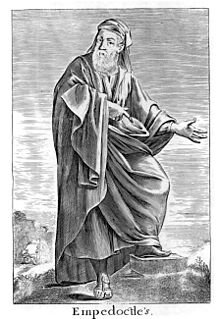 Empedocles was a Greek pre-Socratic philosopher and a citizen of Akragas, a Greek city in Sicily. Empedocles' philosophy is best known for originating the cosmogonic theory of the four classical elements. He also proposed forces he called Love and Strife which would mix and separate the elements, respectively. These physical speculations were part of a history of the universe which also dealt with the origin and development of life.

Parmenides of Elea was a pre-Socratic Greek philosopher from Elea in Magna Graecia. Parmenides has been considered the founder of metaphysics or ontology and has influenced the whole history of Western philosophy. He was the founder of the Eleatic school of philosophy, which also included Zeno of Elea and Melissus of Samos. Zeno's paradoxes of motion were to defend Parmenides' view.

Pre-Socratic philosophy is ancient Greek philosophy before Socrates and schools contemporary to Socrates that were not influenced by him. In Classical antiquity, the Presocratic philosophers were called physiologoi. Their inquiries spanned the workings of the natural world as well as human society, ethics, and religion, seeking explanations based on natural principles rather than the actions of supernatural gods. They introduced to the West the notion of the world as a kosmos, an ordered arrangement that could be understood via rational inquiry. Significant figures include: the Milesians, Heraclitus, Parmenides, Empedocles, Zeno of Elea, and Democritus, among others.

Ancient Greek philosophy arose in the 6th century BC and continued throughout the Hellenistic period and the period in which Greece and most Greek-inhabited lands were part of the Roman Empire. Philosophy was used to make sense out of the world in a non-religious way. It dealt with a wide variety of subjects, including astronomy, mathematics, political philosophy, ethics, metaphysics, ontology, logic, biology, rhetoric and aesthetics.

Pluralism as a political philosophy is the recognition and affirmation of diversity within a political body, which permits the peaceful coexistence of different interests, convictions, and lifestyles.

Diogenes of Apollonia was an ancient Greek philosopher, and was a native of the Milesian colony Apollonia in Thrace. He lived for some time in Athens. His doctrines are known chiefly from Diogenes Laërtius and Simplicius. He believed air to be the one source of all being, and, as a primal force, to be intelligent. All other substances are derived from it by condensation and rarefaction. Aristotle has preserved a long passage by Diogenes concerning the organization of the blood vessels.

Pluralism is a term used in philosophy, meaning "doctrine of multiplicity", often used in opposition to monism and dualism. The term has different meanings in metaphysics, ontology, epistemology and logic.

Exclusivism is the practice of being exclusive; mentality characterized by the disregard for opinions and ideas other than one's own, or the practice of organizing entities into groups by excluding those entities which possess certain traits.. 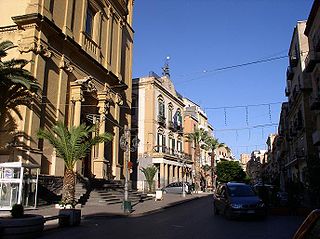 Porto Empedocle is a town and comune in Italy on the coast of the Strait of Sicily, administratively part of the province of Agrigento. It is the namesake of Empedocles, a Greek pre-Socratic philosopher and a citizen of the city of Agrigentum, in his day a Greek colony in Sicily. The primary industries of Porto Empedocle are agriculture, fishing, ironworking, pharmaceuticals and rock salt refining.

In alchemy, prima materia, materia prima or first matter, is the ubiquitous starting material required for the alchemical magnum opus and the creation of the philosopher's stone. It is the primitive formless base of all matter similar to chaos, the quintessence or aether. Esoteric alchemists describe the prima materia using simile, and compare it to concepts like the anima mundi.

The Ionian school of Pre-Socratic philosophy was centred in Miletus, Ionia in the 6th century BC. Miletus and its environs was a thriving mercantile melting pot of current ideas of the time. The Ionian School included such thinkers as Thales, Anaximander, Anaximenes, Heraclitus, Anaxagoras, and Archelaus. The collective affinity of this group was first acknowledged by Aristotle who called them physiologoi (φυσιολόγοι), meaning 'those who discoursed on nature'. The classification can be traced to the second-century historian of philosophy Sotion. They are sometimes referred to as cosmologists, since they were largely physicalists who tried to explain the nature of matter. 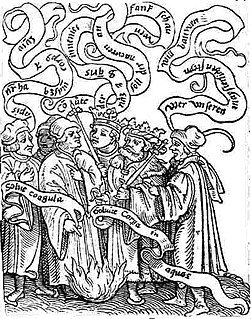 The Turba Philosophorum, also known as Assembly of the Philosophers, is one of the oldest European alchemy texts, translated from the Arabic, like the Picatrix. It is considered to have been written c. 900 A.D.

Philosophy in the Tragic Age of the Greeks is an incomplete book by Friedrich Nietzsche. He had a clean copy made from his notes with the intention of publication. The notes were written around 1873. In it he discussed five Greek philosophers from the sixth and fifth centuries BC. They are Thales, Anaximander, Heraclitus, Parmenides, and Anaxagoras. He had, at one time, intended to include Democritus, Empedocles, and Socrates. The book ends abruptly after the discussion of Anaxagoras's cosmogony.

Hermotimus of Clazomenae, called by Lucian a Pythagorean, was a philosopher who first proposed, before Anaxagoras the idea of mind being fundamental in the cause of change. He proposed that physical entities are static, while reason causes the change. Sextus Empiricus places him with Hesiod, Parmenides, and Empedocles, as belonging to the class of philosophers who held a dualistic theory of a material and an active principle being together the origin of the universe.

Pluralism denotes a diversity of views or stands rather than a single approach or method.

Classical pluralism is the view that politics and decision making are located mostly in the framework of government, but that many non-governmental groups use their resources to exert influence. The central question for classical pluralism is how power and influence are distributed in a political process. Groups of individuals try to maximize their interests. Lines of conflict are multiple and shifting as power is a continuous bargaining process between competing groups. There may be inequalities but they tend to be distributed and evened out by the various forms and distributions of resources throughout a population. Any change under this view will be slow and incremental, as groups have different interests and may act as "veto groups" to destroy legislation. The existence of diverse and competing interests is the basis for a democratic equilibrium, and is crucial for the obtaining of goals by individuals. A polyarchy—a situation of open competition for electoral support within a significant part of the adult population—ensures competition of group interests and relative equality. Pluralists stress civil rights, such as freedom of expression and organization, and an electoral system with at least two parties. On the other hand, since the participants in this process constitute only a tiny fraction of the populace, the public acts mainly as bystanders. This is not necessarily undesirable for two reasons: (1) it may be representative of a population content with the political happenings, or (2) political issues require continuous and expert attention, which the average citizen may not have.

Satyrus of Callatis was a distinguished peripatetic philosopher and historian, whose biographies (Lives) of famous people are frequently referred to by Diogenes Laërtius and Athenaeus. He came from Callatis Pontica, as we learn from a Herculaneum papyrus. He lived earlier than the reign of Ptolemy VI Philometor when his Lives were epitomized by Heraclides Lembus, probably during the 3rd century BC. Athenaeus frequently refers to him as a Peripatetic, but his connection to the Peripatetic school is otherwise unknown. His biographies dealt with many eminent people including kings, statesmen (Alcibiades), orators (Demosthenes), poets, and philosophers. He also wrote on the population of Alexandria, and a work On Characters. Fragments of his biography of the Athenian dramatist Euripides were found at the end of a papyrus scroll discovered at Oxyrhynchus in the early twentieth century.

Biodiversity loss is the extinction of species worldwide, and also the local reduction or loss of species in a certain habitat.