Last updated December 07, 2022
Historic province of west-central France
This article is about the region and former province of France. For the breeds of animal from this region, see Baudet de Poitou and Poitou goat. For other uses, see Poitou (disambiguation).
Place in France

A marshland called the Poitevin Marsh (French Marais Poitevin ) is located along the Gulf of Poitou, on the west coast of France, just north of La Rochelle and west of Niort.

At the conclusion of the Battle of Taillebourg in the Saintonge War, which was decisively won by the French, King Henry III of England recognized his loss of continental Plantagenet territory to France. This was ratified by the Treaty of Paris of 1259, by which King Louis annexed Normandy, Maine, Anjou, and Poitou).

During the late sixteenth and early seventeenth centuries, Poitou was a hotbed of Huguenot (French Calvinist Protestant) activity among the nobility and bourgeoisie. The Protestants were discriminated against and brutally attacked during the French Wars of Religion (1562–1598). Under the Edict of Nantes, such discrimination was temporarily suspended but this measure was repealed by the French Crown.

Some of the French colonists, later known as Acadians, who settled beginning in 1604 in eastern North America came from southern Poitou. They established settlements in what is now Nova Scotia, and later in New Brunswick—both of which were taken over in the later 18th century by the English, (after their 1763 victory in the Seven Years' War).

After the revocation of the Edict of Nantes in 1685, the French Roman Catholic Church conducted a strong Counter-Reformation effort. In 1793, this effort had contributed to the three-year-long open revolt against the French Revolutionary Government in the Bas-Poitou (Département of Vendée). Similarly, during Napoleon's Hundred Days in 1815, the Vendée stayed loyal to the Restoration Monarchy of King Louis XVIII. Napoleon dispatched 10,000 troops under General Lamarque to pacify the region.

As noted by historian Andre Lampert,

"The persistent Huguenots of 17th Century Poitou and the fiercely Catholic rebellious Royalists of what came be the Vendée of the late 18th Century had ideologies very different, indeed diametrically opposed to each other. The common thread connecting both phenomena is a continuing assertion of a local identity and opposition to the central government in Paris, whatever its composition and identity. (...) In the region where Louis XIII and Louis XIV had encountered stiff resistance, the House of Bourbon gained loyal and militant supporters exactly when it had been overthrown and when a Bourbon loyalty came to imply a local loyalty in opposition to the new central government, that of Robespierre." [5]

The Edict of Nantes was signed in April 1598 by King Henry IV and granted the Calvinist Protestants of France, also known as Huguenots, substantial rights in the nation, which was in essence completely Catholic. In the edict, Henry aimed primarily to promote civil unity. The edict separated civil from religious unity, treated some Protestants for the first time as more than mere schismatics and heretics and opened a path for secularism and tolerance. In offering a general freedom of conscience to individuals, the edict offered many specific concessions to the Protestants, such as amnesty and the reinstatement of their civil rights, including the right to work in any field, even for the state, and to bring grievances directly to the king. It marked the end of the French Wars of Religion, which had afflicted France during the second half of the 16th century. 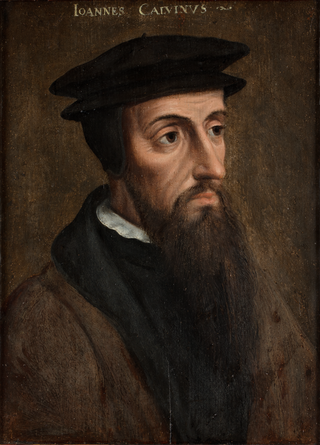 The Huguenots were a religious group of French Protestants who held to the Reformed, or Calvinist, tradition of Protestantism. The term, which may be derived from the name of a Swiss political leader, the Genevan burgomaster Bezanson Hugues (1491–1532?), was in common use by the mid-16th century. Huguenot was frequently used in reference to those of the Reformed Church of France from the time of the Protestant Reformation. By contrast, the Protestant populations of eastern France, in Alsace, Moselle, and Montbéliard, were mainly Lutherans.

Vendée is a department in the Pays de la Loire region in Western France, on the Atlantic coast. In 2019, it had a population of 685,442. Its prefecture is La Roche-sur-Yon. 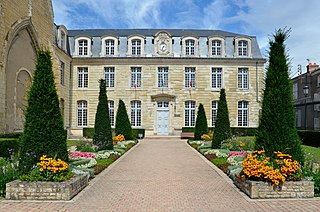 Deux-Sèvres is a French department. Deux-Sèvres literally means "two Sèvres": the Sèvre Nantaise and the Sèvre Niortaise are two rivers which have their sources in the department. It had a population of 374,878 in 2019.

The French Wars of Religion is the term which is used in reference to a period of civil war between French Catholics and Protestants, commonly called Huguenots, which lasted from 1562 to 1598. According to estimates, between two and four million people died from violence, famine or diseases which were directly caused by the conflict; additionally, the conflict severely damaged the power of the French monarchy. The fighting ended in 1598 when Henry of Navarre, who had converted to Catholicism in 1593, was proclaimed Henry IV of France and issued the Edict of Nantes, which granted substantial rights and freedoms to the Huguenots. However, the Catholics continued to have a hostile opinion of Protestants in general and they also continued to have a hostile opinion of him as a person, and his assassination in 1610 triggered a fresh round of Huguenot rebellions in the 1620s. 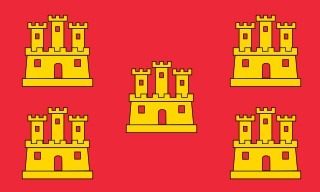 The Edict of Fontainebleau was an edict issued by French King Louis XIV and is also known as the Revocation of the Edict of Nantes. The Edict of Nantes (1598) had granted Huguenots the right to practice their religion without state persecution. Protestants had lost their independence in places of refuge under Cardinal Richelieu on account of their supposed insubordination, but they continued to live in comparative security and political contentment. From the outset, religious toleration in France had been a royal, rather than popular, policy.

The Dragonnades were a French government policy instituted by King Louis XIV in 1681 to intimidate Huguenot (Protestant) families into converting to Catholicism. This involved the billeting of ill-disciplined dragoons in Protestant households with implied permission to abuse the inhabitants and destroy or steal their possessions. The soldiers employed in this role were satirized as "missionary dragoons".

The Marais Poitevin or Poitevin Marsh is a large area of marshland in western France. The name means "Poitou's Marsh" or the "Marsh of the Poitou region". It is a remnant of what was the former Gulf of Poitou. The western zone near the sea is called the "dry marsh". It is used for farming and livestock breeding. The eastern zone, called the "wet marsh", is a maze of islets crisscrossed by picturesque canals, primarily now a tourist destination for boating. It is nicknamed The Green Venice. 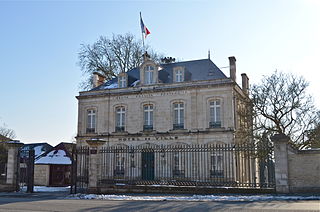 The Kingdom of France is the historiographical name or umbrella term given to various political entities of France in the medieval and early modern period. It was one of the most powerful states in Europe since the High Middle Ages. It was also an early colonial power, with possessions around the world. 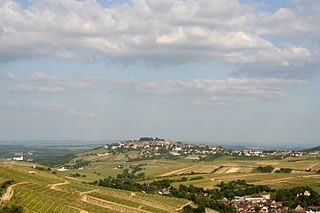 Sancerre is a medieval hilltop town (ville) and commune in the Cher department, France overlooking the river Loire. It is noted for its wine. 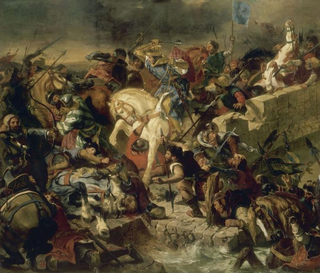 The Saintonge War was a feudal dynastic conflict that occurred between 1242 and 1243. It opposed Capetian forces supportive of King Louis IX's brother Alphonse, Count of Poitiers and those of Hugh X of Lusignan, Raymond VII of Toulouse and Henry III of England. The last hoped to regain the Angevin possessions lost during his father's reign. Saintonge is the region around Saintes in the centre-west of France and is the place where most of fighting occurred.

The County of Poitou was a historical region of France, consisting of the three sub-regions of Vendée, Deux-Sèvres and Vienne. Its name is derived from the ancient Gaul tribe of Pictones. The county was bounded on the north by the Duchy of Brittany, the counties of Anjou and Touraine, on the east by the County of La Marche and on the south by the County of Angoulême. The seat of the county was at Poitiers. 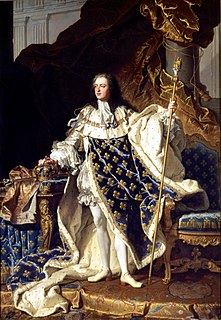 The persecution of Huguenots under Louis XV refers to hostile activities against French Protestants between 1715 and 1774 during the reign of Louis XV.

The Poitevin or Poitou is a French breed of draft horse. It is named for its area of origin, the former province of Poitou in west-central France, now a part of the region of Nouvelle-Aquitaine. It was formed in the seventeenth century when horses of Flemish or Dutch origin, brought to the area by engineers working to drain the Marais Poitevin, interbred with local horses. Although it has the size and conformation of a draft horse, the Poitevin has never been bred for draft abilities, and has been little used for draft work. Its principal traditional use was the production of mules. Poitevin mares were put to jacks of the large Baudet du Poitou breed of donkey; the resulting Poitevin mules were in demand for agricultural and other work in many parts of the world, including Russia and the United States. In the early twentieth century there were some 50,000 brood mares producing between 18,000 and 20,000 mules per year. 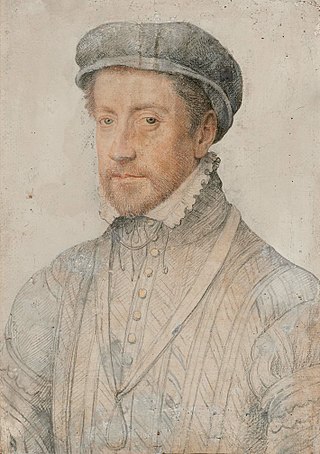 Louis de Bourbon, Duc de Montpensier was the second Duke of Montpensier, a French Prince of the Blood, military commander and governor. He began his military career during the Italian Wars, and in 1557 was captured after the disastrous battle of Saint-Quentin. His liberty restored he found himself courted by the new regime as it sought to steady itself and isolate its opponents in the wake of the Conspiracy of Amboise. At this time Montpensier supported liberalising religious reform, as typified by the Edict of Amboise he was present for the creation of.

Arvert is a commune in the Charente-Maritime department and Nouvelle-Aquitaine region of south-western France.

The siege of Poitiers was a siege of the French city of Poitiers in summer 1569 as part of the French Wars of Religion. By that time the city was a Catholic stronghold faithful to Charles IX of France, though Jean Calvin had preached there in 1534 and it had taken the Protestant side from May to July 1563 before being recaptured by the Catholic Royalist party.