People say one's fate has been pre-determined from the start like the cards in a Texas Hold’em game. Uno (Lau Ching Wan), a small-time crook turned casino magnate, and Jack, the scion of a powerful gaming clan lead very different lives until fate brought them together in a poker duel of a lifetime.

The setting is Macau, Las Vegas of the Orient, where the buzz in town is that Uno has snared the operations of the venerable Sun Casinos from its deceased owner. In a bid to clear his name, he has the sole heir Jack (Louis Koo) brought back from Canada where he spent the last few years in hiding. Jack, an inept businessman and a socially awkward young man, spent his days playing online poker. When it became clear that he has neither the instinct nor the skills to take over, Uno invokes the owner's will and takes charge of Jack's family business.

Disillusioned and depressed, Jack runs into Smiley (Stephy Tang), a simple girl with a seemingly unstoppable good fortune. Together the pair conquers the poker rooms in Macau. Jack played in Uno's arch rival Ms. Fong's (Josie Ho) casino and met her. He requested to represent her casino in the ultimate Poker King tournament to beat Uno. As Jack issues a personal challenge to Uno, it becomes clear that it isn't only bragging rights at stake, but also the throne to the gambling empire that Jack's father had built.

In the Poker King Tournament, Jack and Uno reached the final round along with Uno's henchmen. To build up Uno's playing chips, all the henchmen purposely lost to Uno leaving Jack to face Uno as the last two players. In the last game, Jack and Uno had the same set of cards but of different suits. The last card dealt out gave Jack the victory and he also reclaimed back his father's casino. It was revealed via several flashbacks, Uno built up the casino with Jack's father and the casino was to be passed down to Jack. However, if Jack is incapable, Uno will inherit the casino. However, Uno added a condition that he will only inherit the casino if Jack remains a good-for-nothing. Jack also revealed that he was also a competent poker player all along under the tutelage of a master poker player but feigned weakness to assess Uno's competence at managing the casino. With renewed respect for each other, they became friends and Uno was eventually rehired by Jack as the casino group's CEO while Jack will travel around the world with his teacher and participate in various poker tournament.

Poker King was released in Hong Kong on 22 October 2009. The film was released on DVD and VCD on 18 December 2009 [1] and Blu-ray Disc on 5 January 2010. [2] Releases include a Blu-ray edition with bonus DVD containing making of and interviews with poker champions Winfred Yu and Johnny Chan; DVD + Playing Cards edition; and a Special Edition DVD with a lenticular cover instead of the regular DVD case, a deck of playing cards, and a notebook. [3]

Invisible Target is a 2007 Hong Kong action film directed and produced by Benny Chan, who also wrote the screenplay with Rams Ling and Melody Lui. The film stars Nicholas Tse, Jaycee Chan and Shawn Yue as three police officers who are thrown together due to their backgrounds to bring down a gang of seven criminals led by Tien Yeng-seng.

Journey to the West is a Hong Kong television series adapted from the 16th-century novel of the same title. Starring Dicky Cheung, Kwong Wah, Wayne Lai and Evergreen Mak, the series was produced by TVB and was first broadcast on TVB Jade in Hong Kong in November 1996. A sequel, Journey to the West II, was broadcast in 1998, but the role of the Monkey King was played by Benny Chan instead, due to contract problems between Dicky Cheung and TVB. Cheung later reprised the role in another television series The Monkey King: Quest for the Sutra (2002), which was broadcast on TVB but not produced by the station.

Dirty Tiger, Crazy Frog is a 1978 Hong Kong martial arts comedy film directed by Karl Maka, who also wrote the screenplay with Eric Tsang, produced with Sammo Hung and Lau Kar-wing, who both starred in the lead roles. The film was one of two produced by Gar Bo Motion Picture Company, a company formed by Hung, Maka and Lau created. 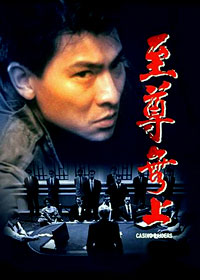 Casino Raiders is a 1989 Hong Kong action drama film written and directed by Jimmy Heung and Wong Jing and starring Andy Lau, Alan Tam, Idy Chan and Rosamund Kwan. It belonged to the early part of the 1989-1996 period, a period when gambling-themed films were dominating the Hong Kong movie scene. It was released one week after Fatal Bet, another film by Heung based on the same true story but filmed in English with different actors in the lead roles. The film was followed by two sequels, No Risk, No Gain (1990) and Casino Raiders II (1991), which have unrelated plots.

Love Under the Sun is a 2003 Hong Kong musical short film directed by Andy Lau. It depicts an evening ball in which a rumor spreads among the guests that one among them has contracted AIDS. The film was meant to raise awareness about AIDS and dispel common misconceptions regarding its contagiousness. It features an all-star cast of Lau and various other Hong Kong cinema actors and Cantopop singers. The music is mostly arranged from Classical works such as Für Elise and Carmen with added or changed lyrics.

The Conman is a 1998 Hong Kong action comedy film directed by Wong Jing and starring Andy Lau, Athena Chu and Nick Cheung. Despite the Chinese title, which translates as Knight of Gamblers 1999, Andy Lau does not reprise his role as the "Knight of Gamblers" from the God of Gamblers series, which was also directed by Wong Jing. The film was followed by a sequel, The Conmen in Vegas, in which Lau and Cheung return with new cast members Natalis Chan, Kelly Lin, Meggie Yu and Alex Man. 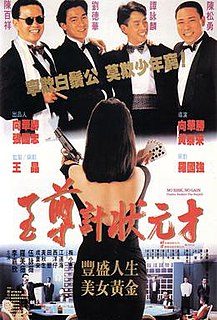 No Risk, No Gain is 1990 Hong Kong comedy film directed by Jimmy Heung and Taylor Wong and starring Alan Tam, Andy Lau and Natalis Chan. It is the second installment of the Casino Raiders series.

Casino Raiders II is a 1991 Hong Kong action drama film directed by Johnnie To and starring Andy Lau, Dave Wong, Jacklyn Wu and Monica Chan. Despite the title, the film is the third installment in the Casino Raiders film series, following Casino Raiders (1989) and No Risk, No Gain (1990). The films in the series are unrelated in plot and merely share the same principal actor of Lau.

Z Storm is a 2014 Hong Kong crime thriller film directed by David Lam, and starring Louis Koo, Gordon Lam and Dada Chan. The plot revolves around Hong Kong's Independent Commission Against Corruption (ICAC) and its investigation of a charity fund that has become involved in a Madoff-style ponzi scheme. 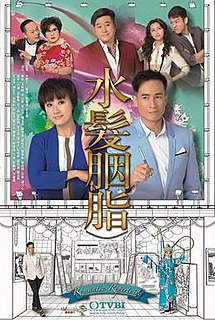 The Tragic Fantasy - Tiger of Wanchai is a 1994 Hong Kong action crime thriller film directed by Stephen Lo and Joe Chu and starring Simon Yam, Lau Ching-wan, Wan Yeung-ming and Roy Cheung. The film is based on the life of Sun Yee On triad member Andely Chan, nicknamed the "Tiger of Wan Chai", who was murdered in Macau in November 1993. 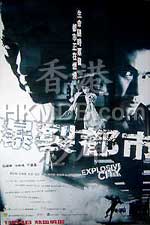 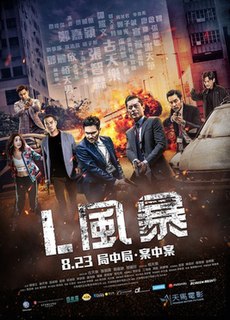