Polegate is a town and civil parish in the Wealden District of East Sussex, England, United Kingdom. [2] It is located five miles (8 km) north of the seaside resort of Eastbourne and is part of the greater area of that town. Although once a railway settlement, its rail links were closed as part of the Beeching cuts. The 2011 census put the civil parish of Polegate at a population of 8,586, with 41.2% aged 65 and over. [1]

Until the coming of the railways in the 1840s, Polegate was a small settlement within the parish of Hailsham. The Roman road from Pevensey to Lewes passed through here, and the turnpike between London and Eastbourne was developed in the 18th century; but it was the opening of the railway between Lewes and Hastings, with later branches to Eastbourne and Hailsham, that meant growth for Polegate. It became a significant junction, with a freight terminal serving both the nearby market town of Hailsham and the local brick making industry. The town grew partly to accommodate the railway employees.

In the 12th century, the Premonstratensian order of monks occupied Otham Abbey in the parish, before relocating around 1208 to Bayham Abbey, near Lamberhurst. [3] Two buildings remain of that time, Otteham Court [3] and its Chapel. [4]

In 1851 a church school was established in Polegate.[ citation needed ]

St John's Church was opened on 10 November 1876.[ citation needed ] The site of the church and the parsonage was donated by Mr Fuller-Meyrick, owner of the Brightling Park Estate. The separate parish of St John's was formed on 26 October 1937, with the first vicar being Rev. John Catterall Salisbury (he had been curate since 1933).[ citation needed ] In 2013 the Parsonage building in Church Road was sold by the Diocese.[ citation needed ]

In the 21st century, with the closure of the line to Hailsham and the once direct route to Hastings, its importance as a railway hub has gone. It remains a road junction, with the erstwhile turnpike now being the A22 road; the junction with the A27 lies within the town boundary.

There are four streets in today's Polegate named for the Levett family (Levett Close, Levett Road, Levett Avenue and Levett Way). The Anglo-Norman family were early Sussex landowners, and held manors and lands across the county, including Firle, Bodiam, Hollington and elsewhere. The family's lands were carried into the families of Gildredge (and then to the Davies-Gilbert family of Eastbourne), the Eversfields of St. Leonards-on-Sea, the Ashburnhams, the Chaloners and others.

Polegate is located on a ridge in the gap between the Weald to the north and the South Downs. To the east lie the Pevensey Levels, the one time bay now converted into farmland with the buildup of the coastal shingle bank during the early Middle Ages. Both the roads and the railway use the gap.

The town is gradually becoming part of the greater Eastbourne conurbation, connecting with Willingdon to the south. Many of the town's working population work away: either in Eastbourne or Willingdon. [5] Due to its location situated on the corner of the A27 and A22, it allows easy access to larger cities like Brighton and Hastings in less than an hour.

Climate in this area has mild differences between highs and lows, and there is adequate rainfall year-round. The Köppen Climate Classification subtype for this climate is "Cfb" (Marine West Coast Climate/Oceanic climate).

Polegate is split into two wards for local elections, North and South Polegate. North Polegate with 4000 electors is twice the size of South Polegate's 2000 electors, returning twice as many councillors. [7] The Parish is represented at the lowest tier by Polegate Town Council. Fifteen councillors are elected from the two wards every four years. Public meetings are held monthly at the council chambers in Polegate. The 2007 election returned twelve councillors representing the Polegate residents association, two Liberal Democrats and an Independent. [8]

The district council for Polegate is Wealden District Council. District council elections are held every four years. Fifty-five councillors in total are elected, three of these from the Polegate wards. The May 2007 election returned 34 Conservative, 12 Liberal Democrat, 3 Independent Democrat, 3 Wealden Independent, 2 Green Party and 1 no party allegiance. [9] The Polegate councillors parties were 2 Liberal Democrats and 1 Independent Democrat. [7]

The next tier of government is the East Sussex County Council with responsibility for education, libraries, social services, civil registration, trading standards and transport. Elections for the County Council are held every four years. For these elections Polegate is combined with Willingdon and East Dean to return two seats. [10] The 2009 East Sussex County Council election resulted in 29 Conservatives, 13 Liberal Democrats, 4 Labour and 3 Independent, of which the Polegate, Willingdon and East Dean ward provided two Independent councillors. [10]

Polegate is represented in the UK Parliament by the Lewes constituency. The current serving MP is the Conservative Maria Caulfield who won the seat in the 2015 general election.

Prior to Brexit in 2020, the village was part of the South East England constituency in the European Parliament.

Chaucer Industrial Business Park Estate is located on Dittons Road where the major part of Polegate's industrial businesses are located. [11] A number of small-town shops and businesses occupy the High Street, including a supermarket, hair dressers and convenience store, as well a Premier Inn hotel to the north of the town.

There are also two Sustrans Cycle paths on the National Cycle Network, route 2 between Dover and St Austell, also route 21 between Greenwich and Eastbourne.

The local football team, Polegate Town FC, currently plays each Saturday at the War Memorial Recreational Ground. The club currently has two teams, with the 1st team playing in the Mid Sussex League Championship Division, and the 2nd team in Division 5. The club reformed in 2006 after an absence of five years without a Polegate team. In 2008, the club moved back to the Rec, having played its first two seasons on Eastbourne Council pitches. The club have enjoyed various successes since reforming, most recently winning the Blacklands Finance Challenge Cup. In 2015, the club will celebrate its centenary, as the earliest known Polegate team was first established in 1915 (a photo of this team can be seen in the pavilion at the War Memorial Recreational Ground).

Polegate also have a successful Cricket team, Polegate and Stone Cross Cricket Club, who use the same pitch during the summer months.

The railway arrived in Polegate in 1846, built by the London Brighton and South Coast Railway on the extension from Brighton to Hastings.[ citation needed ] In 1849 branches extended to Eastbourne and Hailsham (later to Eridge).[ citation needed ] The line to Hailsham was nicknamed the Cuckoo Line by railway workers. Both that and the direct link to Hastings are now closed. The present Polegate railway station is served by the Southern (train operating company) with regular train services to London, Brighton, Eastbourne and Hastings.

Bus services are provided by

The long-distance footpath, the Cuckoo Trail passes through the parish, as does the cycleway route No. 2.

Main article: List of current places of worship in Wealden

There are four churches in Polegate: the Church of England parish church, dedicated to St John; [14] the Roman Catholic church of St George; a Seventh-day Adventist Church; and a United Reformed Church. Quakers also meet at the Bernard Baron Homes.

Polegate is covered by BBC Sussex, Heart Sussex and Sovereign FM. Local newspapers include the Eastbourne Herald, Eastbourne Gazette, Hailsham Gazette and the Sussex Express; all published by Beckett Newspapers.

Polegate formed a twinning association in 1981 and is twinned with two towns: [15]

Seaford is a town in East Sussex, England, east of Newhaven and west of Eastbourne.

Wealden is a local government district in East Sussex, England. Its council is based in Hailsham. The district's name comes from the Weald, the remnant forest which was once unbroken and occupies much of the centre and north of the area.

Hailsham is a town, a civil parish and the administrative centre of the Wealden district of East Sussex, England. It is mentioned in the Domesday Book, where it is called Hamelesham. In one part yet, mentioned in other part of the same book as ‘’’Tilux’’’, the land of Ricard de Tunbrige. The town of Hailsham has a history of industry and agriculture. 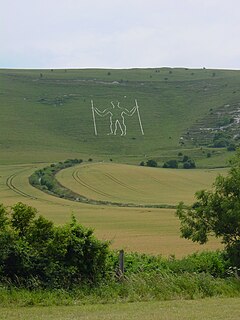 Long Man is a civil parish in the Wealden District of East Sussex, England, which includes the villages of Wilmington, Milton Street and Folkington. The parish is named after the Long Man of Wilmington, a 69.2-metre (227 ft) chalk figure in the parish. 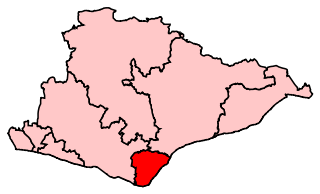 Eastbourne is a constituency for the House of Commons of the UK Parliament. It was created as one of nine in Sussex in 1885, since when it has reduced in geographic size reflecting the growth of its main settlement, Eastbourne. 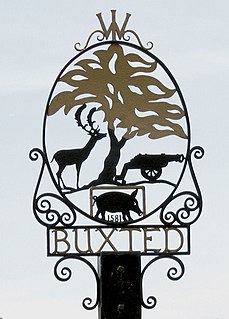 Buxted is a village and civil parish in the Wealden district of East Sussex in England. The parish is situated on the Weald, north of Uckfield; the settlements of Five Ash Down, Heron's Ghyll and High Hurstwood are included within its boundaries. At one time its importance lay in the Wealden iron industry, and later it became commercially important in the poultry and egg industry. 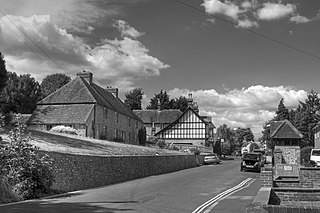 Willingdon and Jevington is one of the civil parishes in the Wealden District of East Sussex, England. The two villages lie one mile (1.6 km) south of Polegate. The two parishes, two decades ago, were separate; the merger of the two has produced a parish of over 7,000 people. Willingdon is part of the built-up area which is Eastbourne, and lies on the main A22 road, whilst Jevington is on a minor road leading to Friston. In addition under the name of Willingdon it is also an electoral ward.

Hellingly is a village, and can also refer to a civil parish, and to a district ward, in the Wealden District of East Sussex, England.

Warbleton is a village and civil parish in the Wealden district of East Sussex, England. Within its bounds are three other settlements. It is located south-east of Heathfield on the slopes of the Weald. 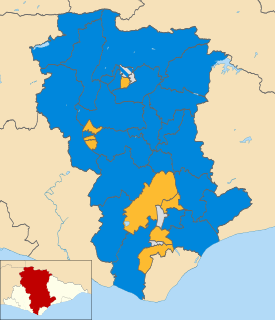 St Wilfrid's Church is a Roman Catholic church serving the town of Hailsham in the Wealden district of East Sussex, England. The present building was completed in 2015 and is the third church to serve the town; it stands between its predecessors, a small hall opened in 1922 and a larger church of 1955, on a site which had belonged to a Catholic family since the 19th century. The Hailsham area was historically supportive of Protestant Nonconformist beliefs and had few Catholics, and for many years worshippers had to attend Mass in basic premises: rooms in private houses and, from 1917, a subdivided loft in the stables of a brewery. Numbers grew rapidly after the first permanent church opened, and after six decades of being served from Our Lady of Ransom Church, Eastbourne, Hailsham became an independent parish in 1957. The town's rapid postwar growth and an increasing Catholic population prompted the construction of the larger new church. 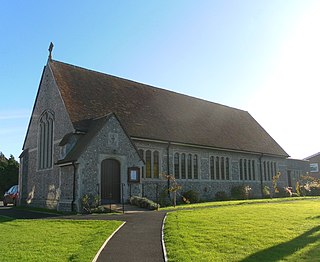 St George's Church is a Roman Catholic church of the parish of Hailsham and Polegate serving the town of Polegate in the Wealden district of East Sussex, England.