Police (Russian :полиция, tr. politsiya,IPA:  [pɐˈlʲitsɨjə] ) is the federal law-enforcement agency in Russia, operating under the Ministry of Internal Affairs. It was established in 2011, replacing the Militsiya, the former police service.

It is the federal police service of Russia that operates according to the law (Закон "о полиции"), [3] as approved by the Federal Assembly, and subsequently signed into law on February 7, 2011 by then President of the Russian Federation, Dmitry Medvedev.

The system was created to protect the public order and to fight against crime in the Russian Empire. It was re-organized on March 1, 2011, under the Russian Federation (except for existing structures not related to the Ministry of Internal Affairs).

In 1504, cheval de frise were installed in Moscow, under which the guards, drawn from the local population, were stationed. The city was divided into areas, between which gates with lattices were built. It was forbidden to move around the city at night or without lighting. Subsequently, the Grand Prince Ivan IV established patrols around Moscow for increased security.

The Sudebnik of Ivan IV transferred the cases "about guided robbers" to be under the jurisdiction of honorary elders. Before this, the Letters of Honor were like awards and were given by a petition of the population. These letters permitted local society to independently manage police work. In cities, police functions were guided by the mayor.

By a decree on August 14, 1687, the affairs of the Robber Administration were transferred to the Zemsky administrations. In April 1649, Grand Prince Alexis issued a decree on the urban blessing system previously used. By decree in the White City (now known as Belgorod), a team was to be created under the leadership of Ivan Novikov and clerk Vikula Panov. The detachment was supposed to maintain safety and order, as well as protect against fire. They were betrayed by five lattice clerks and "one person from 10 yards" with roars, axes, and water pipes.

Police officers in large cities were called Zemsky Yaryg. The color of the uniforms varied between cities. In Moscow, officers were dressed in red and green clothes. On the chest, they had the letters "З" (Z) and "Я" (YA) sewn.

In 1669, detectives universally replaced the role of honorary elders.

The police force in Saint Petersburg was established as the Main Police in 1715 by decree from Peter the Great. Initially, the staff of the Saint Petersburg police consisted of the deputy general-police chief, 4 officers, and 36 lower ranks. The clerical and ten clerks kept office work in the Main Police Station Office. The police not only kept order in the city but also carried out several economic functions and were engaged in the improvement of the city — paving streets, draining swampy places, garbage collection, etc.

On June 7, 1718, Adjutant General Anton de Vieira was appointed General Polizeimeister. [4] To aid him in completing work, the Chief Police Office was created and one army regiment was handed over to the General Polizeimeister. All the ranks of this regiment became police officers. Through the efforts of General de Vieira, in 1721, the first lanterns and benches for rest were installed in St. Petersburg.

On April 23, 1733, Empress Anna signed a decree "On the establishment of police in cities." This decree gave the police the authority of the court and allowed them the right to impose penalties in criminal cases.

The Detective Department was founded in 1866, operating under the Police Department of Ministry of Internal Affairs, and by 1907, similar departments had been created in other major cities of the Russian Empire, including Moscow, Kiev, Riga, Odessa, Tiflis, Baku, Rostov-on-Don and Nizhny Novgorod. Other districts were policed by rural police or gendarmerie units.

The 3,500 strong police force of Petrograd provided the main opposition to the rioting, which marked the initial outbreak of the February Revolution. After the army units garrisoning the city defected, the police became the main target of the revolutionaries, and many were killed. The Police of the Russian Empire was dissolved on March 10, 1917, and on April 17, the Provisional Government established the People's Militia (Militsiya) as a new law enforcement body.

The militsiya was formed on March 10, 1917, replacing the former Russian police organizations of the Imperial government. There were detachments of the people's militsiya and the workers' militsiya that were organized as paramilitary police units. After the dissolution of the Soviet Union, the militsiya continued to exist in Russia until March 1, 2011.

Initiated by former President Dmitry Medvedev, Russian police reform (Закон РФ "о полиции" (Zakon RF "O politsii" {Law on police}) is an ongoing effort to improve the efficiency of Russia's police forces, decrease corruption, and improve the public image of law enforcement. On February 7, 2011, amendments were made to the laws of the police force, the criminal code, and the criminal procedure code. The amendments came into force on March 1, 2011. These changes stipulate a law enforcement personnel cut of 20%, renaming Russian law enforcers from "militsiya" (militia) to "politsiya" (police), substantial increases in wages, centralization of financing, and several other changes. Around 217 billion rubles ($7 billion) have been allocated from the federal budget to finance the reform.

Main changes and aims of the reform

Russian police use a number of different models of automobiles which range greatly in age and technical specification.

The Russian Police do not use the rank of corporal.

There is a four-star police rank, General of the Police of the Russian Federation (Генерал полиции Российской Федерации). The rank was recently established.

The Ministry of Internal Affairs of the Russian Federation is the interior ministry of Russia. Emperor Alexander I of Russia founded its predecessor in 1802 in Imperial Russia. The Ministry has its headquarters in Moscow.

Militsiya was the name of the police forces in the Soviet Union and in several Eastern Bloc countries (1945–1991), as well as in the non-aligned SFR Yugoslavia of 1945–1992; the term continues in common and sometimes official usage in some of the individual former Soviet republics such as Belarus, Tajikistan, Uzbekistan, Kyrgyzstan, as well as in the unrecognised republics of Abkhazia, South Ossetia and Transnistria. 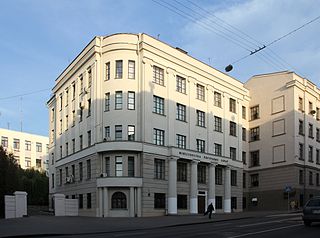 Ministry of Internal Affairs of Belarus, abbreviated as MVD in the Russian language and МUS in the Belarusian language, is a body of the Belarusian Government that is charged with the internal affairs of Belarus. Day to day law enforcement is carried out by the Militsiya. The Ministry is also tasked with providing security to state buildings and officials. Organizations such as the Presidential Guard are under the control of the Ministry. The clearing of landmines is among the tasks of the ministry.

Russian police reform is an ongoing reform initiated by then President Dmitry Medvedev to improve the efficiency of Russia's police forces, decrease corruption and improve the public image of law enforcement among other goals. On 7 February 2011, amendments were made to laws on the police force, the criminal code and the criminal procedure code.

The Moscow Police, officially the Main Directorate of Internal Affairs of the city of Moscow, is the police force for Moscow, Russia. 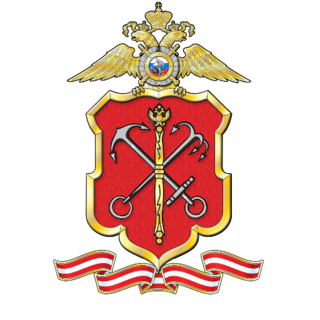 Vladimir Alexandrovich Kolokoltsev is a Russian politician and police officer who was the Moscow Police Commissioner from 2009 to 2012. He serves as Russian Minister of Internal Affairs since 21 May 2012.

Ministry for Internal Affairs of Mordovia or the Police of Mordovia is the main law enforcement organization of Mordovia, Russia.

The Main Directorate for Internal Affairs of Kamchatka or the Police of Kamchatka is the main law enforcement agency in Government of Kamchatka Krai in Far East Russia. The central Headquarters is in Petropavlovsk-Kamchatsky. 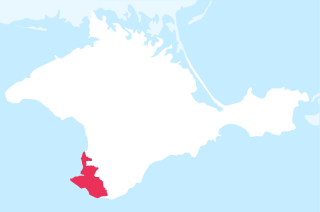 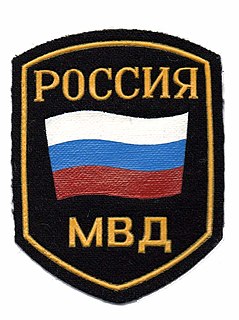 The militsiya was the national police service of Russia from the 1950s until 2011, when it was replaced by the Police of Russia.

The Police Band Service of the Ministry of Internal Affairs of Russia is the official police band service of the Police of Russia, a directly reporting agency of the Ministry of Internal Affairs. The PBS-MIA-RF serves as the primary ceremonial music component of the Russian Police, which provides bands for each of the regional and city police departments that compose this institution, together with its educational and training establishments.

The Militsiya of the Republic of Belarus is a law enforcement agency in Belarus responsible for regular policing duties in the country.

Police and Internal Affairs Servicemen's Day, commonly known outside Russia as the Day of the Police is a public holiday celebrated in Russia and most post-Soviet republics which honors all those serving in their national police. Russia, being the most notable country to celebrate the holiday was a pioneer in the celebrations, using the occasion to honor the Police of Russia.