Polish army order of battle in 1939

Polish OOB during the invasion of Poland . In the late thirties Polish headquarters prepared "Plan Zachód" (Plan "West), a plan of mobilization of Polish Army in case of war with Germany. Earlier, the Poles did not regard the Germans as their main threat, priority was given to threat from the Soviets (see: Plan East).

Created on July 11, 1939, under Major General Kazimierz Fabrycy. Armia Karpaty was created after Germany annexed Czechoslovakia and created a puppet state of Slovakia. The main aim of the army was to secure mountain passes in the Carpathians. Initially the army consisted of 2 improvised mountain brigades and a number of smaller units, but later in the course of war was joined by forces of the withdrawing Armia Kraków.

Additionally, mobilisation plans called for creation of the Tarnów Group consisting of:

Created on March 23, 1939, under gen. Juliusz Rómmel. Armia Łódź was to become a bolt between Armies "Kraków" and "Poznań". However, because of mistakes committed by Gen. Rómmel, the army was located too close to the German border and joined fighting from the very beginning of the campaign, which deprived it of any possibilities of cooperation with the surrounding units. It consisted of 4 infantry divisions and 2 cavalry brigades.

Created on March 23, 1939, for defence of Warsaw from the north. The army was to defend fortified lines along the border with East Prussia near Mława, and then retreat towards Narew river. Led by brig. gen. Emil Krukowicz-Przedrzymirski. Consisted of 2 infantry divisions and 2 cavalry brigades.

The Army was created on March 23, 1939, to defend Toruń and Bydgoszcz and to carry out delaying actions in the so-called "Polish Corridor". It was led by Lt.-Gen. Władysław Bortnowski and consisted of five infantry divisions, two National Defence brigades and one cavalry brigade.

The Armia Poznań led by mj. gen. Tadeusz Kutrzeba was to provide flanking operations in the Grand Poland and withdraw towards lines of defence along the Warta river. It consisted of 4 infantry divisions and 2 cavalry brigades.

Under gen. Stefan Dąb-Biernacki. Created in the summer of 1939 as the main reserve of the Commander in Chief. According to the "Plan West" (Plan Zachód, code name for the Polish mobilization plan) it was to be composed of units mobilized as the second and third waves and its main purpose was to cooperate with the nearby armies "Poznań" and "Kraków".

Mobilized in two groups. Because of fast German advance both groups entered combat separately and most units did not reach full mobilization. It consisted of 6 infantry divisions, 1 cavalry brigade and a battalion of tanks.

For a detailed description of the Warszawa Army operations see: Siege of Warsaw (1939)

Created on September 10, 1939, from various units in Warsaw and Modlin Fortress area. Initially it consisted of approximately 25 infantry battalions and 40 tanks. Later it was reinforced by forces of Łódź Army and elements of Modlin Army. It was commanded by col. Walerian Czuma, although the nominal commander was gen. Juliusz Rómmel.

Was one of the reserves of the northern front of Polish defences, created on September 1, 1939. According to Plan West, it was supposed to defend the line of the Narew river from Wehrmacht units advancing from East Prussia. Due to rapid German advance, the group withdrew towards the Bug river, and on September 11, Polish Commander in Chief Edward Rydz-Śmigły ordered General Wincenty Kowalski, commandant of Operational Group Wyszków, to merge his unit with Northern Front under General Stefan Dąb-Biernacki.

It consisted of the following units:

The Prusy Army was one of the Polish armies to fight during the Invasion of Poland in 1939. Created in the summer of 1939 as the main reserve of the Commander in Chief, it was commanded by Gen. Stefan Dąb-Biernacki. The word Prusy in the Polish language means Prussia, but this name only served as a codename and the region of operations of this army was far from East Prussia. This is in contrast to other Polish armies in 1939 which were named after the geographical regions where they formed. The Prusy Army, whose original name was Warszawa Army, was named so after a folwark in central Poland called Prusy, which served as the headquarters of General Dąb-Biernacki.

The 10th Cavalry Brigade was a Polish military unit in World War II. It was the only fully operational Polish motorized infantry unit during the Invasion of Poland, as Warsaw Armoured Motorized Brigade was not completed by September 1, 1939. 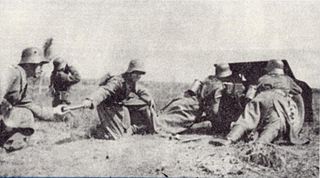 The Battle of Jordanów took place on 1–3 September 1939, during the Invasion of Poland and the opening stages of World War II. It was fought between the German XVIII Panzer Corps of Gen.E.Beyer and the Polish 10th Motorized Cavalry Brigade under Col. Stanisław Maczek.

Kraków Army was one of the Polish armies which took part in the Polish Defensive War of 1939. It was officially created on March 23, 1939 as the main pivot of Polish defence. It was commanded by Gen. Antoni Szylling. Originally, Kraków Army was to be made of seven infantry divisions, two cavalry brigades and one mountain brigade. On September 1, 1939, General Szylling had the force which consisted of five infantry divisions, two cavalry brigades and one brigade of mountain infantry. Altogether, the army was made of 59 battalions, 29 squadrons, 352 cannons, 90 tanks, two armoured trains and 44 planes. These forces were not enough to halt German advance, especially in the area north of Częstochowa, where Kraków Army connected with Łódź Army. Main thrust of Wehrmacht panzer units was directed there, and this area was defended only by the Polish 7th I.D., which was destroyed in the early days of September 1939, opening the way towards central Poland.

The 7th Infantry Division was the name of several units of the Polish Army.

The 16th Pomeranian Infantry Division is a military unit of the Polish Army. It was first raised on 16 August 1919 during the Polish uprising, before going on to serve during the subsequent war with the Bolsheviks. At the start of World War II the division fought briefly against the advancing German Army before being destroyed on 19 September 1939 after being surrounded in the Kampinos Forest. The Division was raised once more in 1945 following the Soviet take over of Poland, however, it did not see further action during the war. Afterwards it continued to serve, undergoing a number of changes in name and role. Today, it exists as the 16th Mechanised Division.

The Warszawa Army was one of the Polish armies to take part in the Polish Defensive War of 1939. Created on 8 September, eight days after the invasion begun, it was an improvised formation charged with the defence of the Polish capital of Warsaw (Warszawa).

Karpaty Army was formed on 11 July 1939 under Major General Kazimierz Fabrycy after Nazi Germany created a puppet state of Slovakia and the Protectorate of Bohemia and Moravia was proclaimed after the events that lead to the breakup of Czechoslovakia. According to Polish historians Czesław Grzelak and Henryk Stańczyk, it consisted of two mountain brigades, Lwów Brigade of National Defence and a Battalion Węgry (Hungary). Altogether, Karpaty Army was made of 26 battalions, 160 cannons and 16 planes.

Army Poznań led by Major General Tadeusz Kutrzeba was one of the Polish Armies during the Invasion of Poland in 1939.

Lublin Army was an improvised Polish Army created on September 4, 1939 from the Warsaw Armoured Motorized Brigade and various smaller units concentrated around the cities of Lublin, Sandomierz and upper Vistula river. It was commanded by Maj. Gen. Tadeusz Piskor. Lublin Army was not part of prewar Polish operational plans. It was improvised when it became obvious that quickly advancing Wehrmacht armored and motorized units would reach the Vistula river line.

Plan East was a Polish defensive military plan, created in the 1920s and 1930s in case of war with the Soviet Union. Unlike Plan West, it was being prepared during the whole interwar period, as the government of the Second Polish Republic treated the Soviet Union as the greatest potential military threat, which was capable of initiating a full-scale war. However, only a few loose historical documents remain of the original plan today. 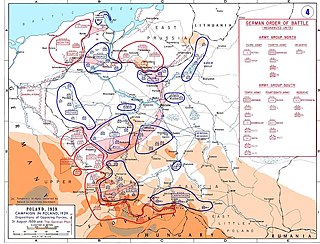 Independent Operational Group Narew was one of the Polish Army Corps that defended Poland during the Invasion of Poland in 1939. It was created on 23 March 1939 and was commanded by general Czesław Młot-Fijałkowski.

The 25th Infantry Division was a unit of the Polish Army in the interbellum period, created in 1921 with headquarters in Kalisz. It consisted of the following regiments:

Wielkopolska Cavalry Brigade was a cavalry unit of the Polish Army in the interbellum period. It was created on April 1, 1937 out of the Cavalry Brigade "Poznań". Its headquarters were stationed in Poznań and the brigade consisted of these units:

The 11th Carpathian Infantry Division, was a tactical unit of the Polish Army in the interbellum period, which fought in the Invasion of Poland in 1939. Elements of the unit would go on to serve in the Polish Armed Forces in the East. 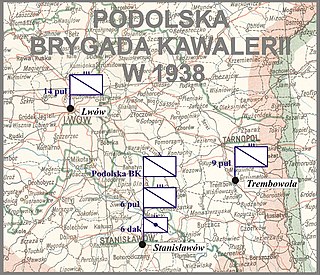 Podolska Cavalry Brigade was a cavalry unit of the Polish Army in the interbellum period. It was created on April 1, 1937 out of the 6th Independent Cavalry Brigade. Its headquarters were stationed in Stanisławów and the brigade consisted of these units:

35th Infantry Division was a reserve unit of the Polish Army in the Second Polish Republic. It did not exist in peacetime organization of the army, and was formed between August 31 - September 4, 1939, during the Invasion of Poland.